Post-apocalyptic mayhem, scantily clad women, well men too. No one seems to wear much in the way of clothing in a Mad Max movie, except Max. Anyway, Mad Max: Fury Road is everything you would expect from the series…lots of action, car chases, strange people doing even stranger things, oh yeah, more action.

This installment also features something never before seen in a Mad Max film: the hero (or is it anti-hero) riding a motorcycle. We have seen a fella drop a snake from a gyrocopter (if you watch the movies, you know what I am talking about), but never has Max mounted anything on two wheels. Having noticed that, one wonders what sort of bike would inspire such madness from a man named Mad Max. Why suddenly hop on a bike when cars and trucks have always gotten you through? A woman of course! Let me set the stage. 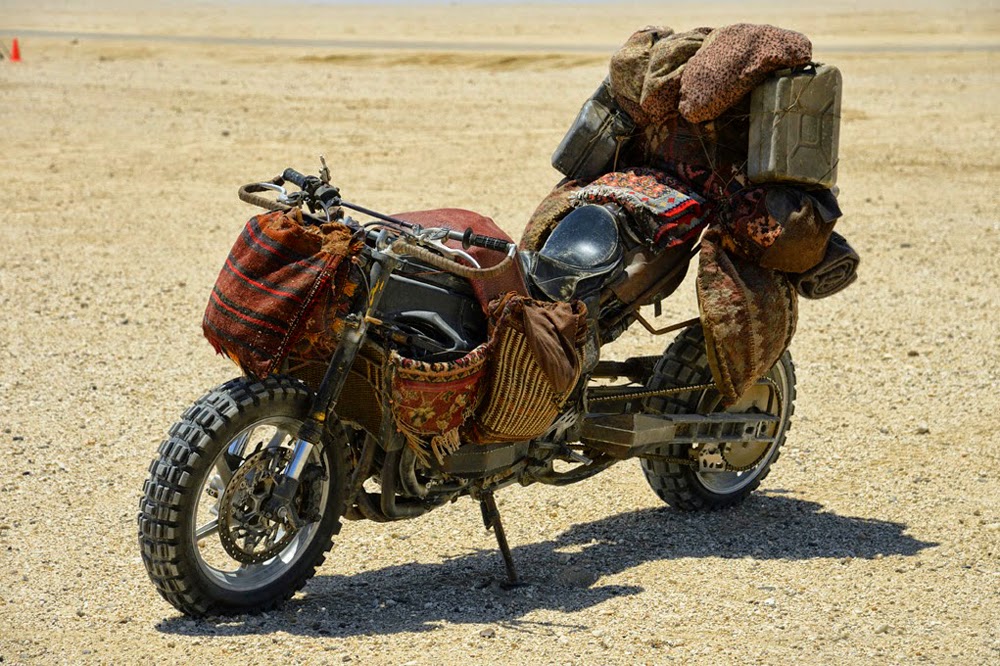 Max helps Charlize Theron’s character Furiosa and the 5 Wives during an escape attempt. Ok, so Charlize Theron could get any one on a motorcycle. Picture it: the Pope (my apologies to Catholics) on a bike in full regalia…that cool hat and all…just because she asked. Yeah, it could happen!

Enough of that. Anyway, Max is given a bike and supplies for his help. The bike is covered in a bunch of carpet bags and is a bit stripped down, but it appears to be a Yamaha R1, or to be more precise a Yamaha YZF-R1, outfitted with an extended swingarm, barkbusters (hand guards), sissy bar, knobby tires, mammoth rear sprocket, and a caparison of carpets.

The R1 has been in production since 1998 and is considered to be a sport bike or superbike. In its stripped down condition, it is hard to place an exact year on the bike, so let’s talk about the 2015 model. For 2015, Yamaha unveiled an new generation of the R1. Manufacturer specs state the bike produces 200 hp, yet weighs an anemic 439 lbs. The bike features advanced traction and slide control, a progressively-tapering anti-wheelie system, anitlock brakes, launch control, selectable power modes, and a quickshifter. The electronics package is fed information over 100 times per second through a six-axis gyro called the Inertial Measure Unit. The engine features a shortened bore-to-stroke ratio, a larger airbox, a new finger-follower valve setup, and split titanium conrods. This is the first time that a street legal bike has featured split titanium conrods!

If buyers upgrade to the R1M, they get a semi-active Öhlins suspension, carbon fiber body parts, an aluminum fuel tank, stickier Bridgestone tires, and the R1M integrates GPS so that riders can tune their suspension based on known location features. Lets not forget that it is Bluetooth capable, so a rider can tune it from any mobile device. Good luck getting one, though. Yamaha only produced 500 R1Ms for the 2015 model year. 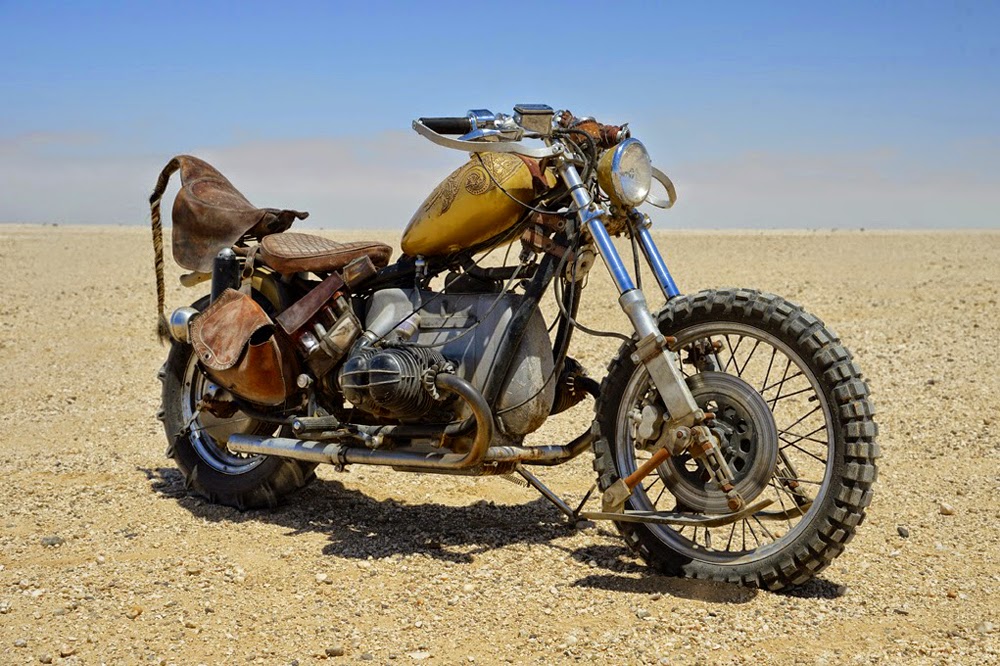 Alright, enough of that lust affair with the R1. Let’s move on to Charlize Theron’s bike. The guys from Return of the Cafe Racers have theorized that it’s a mix-n-match of a BMW R80 engine sitting in a R69 frame. The tip is that the movie prop guys recognized how cool the airhead engine looks and left it in its natural state, as a lot of custom builders have been doing of late (example 1, example 2). Again, the year is impossible to peg. It has a sweet paddle-tread rear tire like you’d see on a hillclimber, and some custom sand-skids attached to the front forks.  It’s also running barkbusters like Max’s bike. The various gangs that Mad Max and his harem encounter in the desert are all stripped down as much as possible then have an odd assortment of accouterments welded on to give them the needed post-apocalyptic-I- haven’t-been-maintained-in-decades look. Among the more recognizable bikes are a handful of Yamaha YZ250F’s, durable trail bikes that are popular the world over.  The Rock Riders seemed to have a lot of these. There is also what appears to be a stripped trials bike, possibly a Gas Gas TXT250. Other bikes include a bunch of touring bikes from well known brands like BMW, Honda and Triumph. One of the standouts is a Honda Goldwing with sand-skids, Beyond-Thunderdome-ish wig mounted on chain-link fence, and a junkyard throne of a rear seat that may or may not be built using a lawnmower frame.

Some of these are the bikes of the Vuvalini women.  Unfortunately, for most motorheads, these bikes have been insulted by being required to sport sails, feathers, carpet bags, and other feminine swag. At least there were no appletinis to be seen!

After you watch the movie, hit us up in the comments section, on Facebook, or through Twitter, if you think we are way off base on the bikes. We would also like to hear if you think the feathers and sails are a little degrading for any motorcycle. Sure, every movie with a bike in it cannot be Easy Rider, but come on…feathers? Really?

Leave a Reply to Ian Cancel