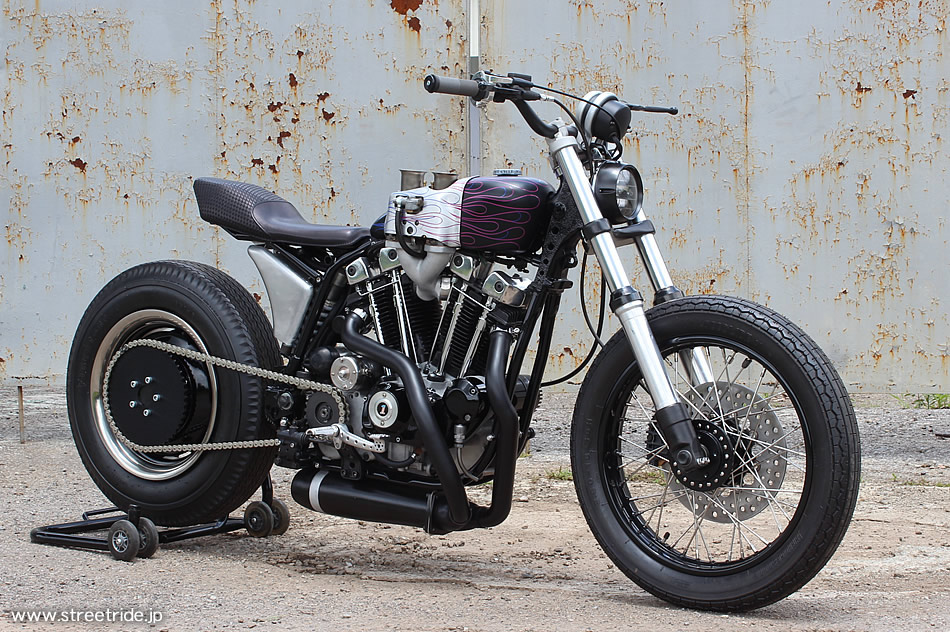 This incredible 1977 Harley XLH1000 Sportster started as a complete mystery.  Scott T-Bone Jones of Santa Ana’s Noise Cycles posted a shot of it at the 2015 Hot Rod Custom Show in Yokohama, Japan, but it took a full day of inquiries to learn the builder:  Takuya Aikawa of SURE SHOT in Chiba Prefecture, Japan.

The build was inspired by the Street Fighter scene of the 1990s.  Aikawa wanted to create a bike that was as narrow as possible–a fusion of new and old, that would fit in well among the hot rods of #HRCS2015. The ironhead v-twin of this era was a good start, slim-built except for the pesky stock carburetion.  What did Aikawa do?  He installed one of the signature aspects of this build:  downdraft Weber carburetors whose twin velocity stacks rise through the right half of the tank.  Certainly not the most practical setup, but this bike is a finely honed work of art, with practicality sacrificed in service of vision.

Another striking aspect of the build is the hot rod rear wheel and tire:  a 15″ steel rim wrapped in a Firestone bias-ply tire you’d expect to find on a ’32 Ford.  Probably a little scary when leaned on its side, but it looks incredible!  The wheel is mated to a custom single-sided swingarm formed from ovoid steel, which doubles as an oil reservoir.  The rear shock is a Sachs automotive model.

The forks are from a CBR900RR, shaved and smoothed so they are hardly identifiable as such, and a pair of risers stand through the custom triple to hold a set of motocross-style handlebars.

The tank is a matte blank with pink and blue pinstriped flames, and the custom exhaust boasts a muffler from Power Effects, best known for their Corvette systems.

Some readers might decry the impracticality of this build, what with the downdraft carbs and squared-off rear tire, but we don’t see it this way.  Builds like this serve as inspiration for the garage-built creations of Everyman builders like the rest of us.  There is a bold, almost ferocious build, and we love it.