Today, we’re excited to present one of the sexiest, most well-sorted Honda CB cafe racers we’ve come across:  “Class Act,” a 1977 CB550 built by Bill Docchio of Sin City Vintage Cycles and owned by Tim Gerst of Boynton Beach, Florida.

We had the pleasure of seeing this bike in the flesh last weekend at Iron & Clematis 3 in Palm Beach, put on by Vintage Iron Club, and it’s truly incredible.  Builder Bill Docchi works out of a very well-outfitted personal garage, and his attention to detail is unparalleled.  This bike has so many small but mighty touches, from the handmade tank (welded to the bottom of the stock tank to retain the original rubber mountings) to the hand-formed seat pan and tail section to the custom-milled velocity stacks, and the bike was Dyno-tested to dial in the carbs.

We’ll let Bill Docchio give you the full story. 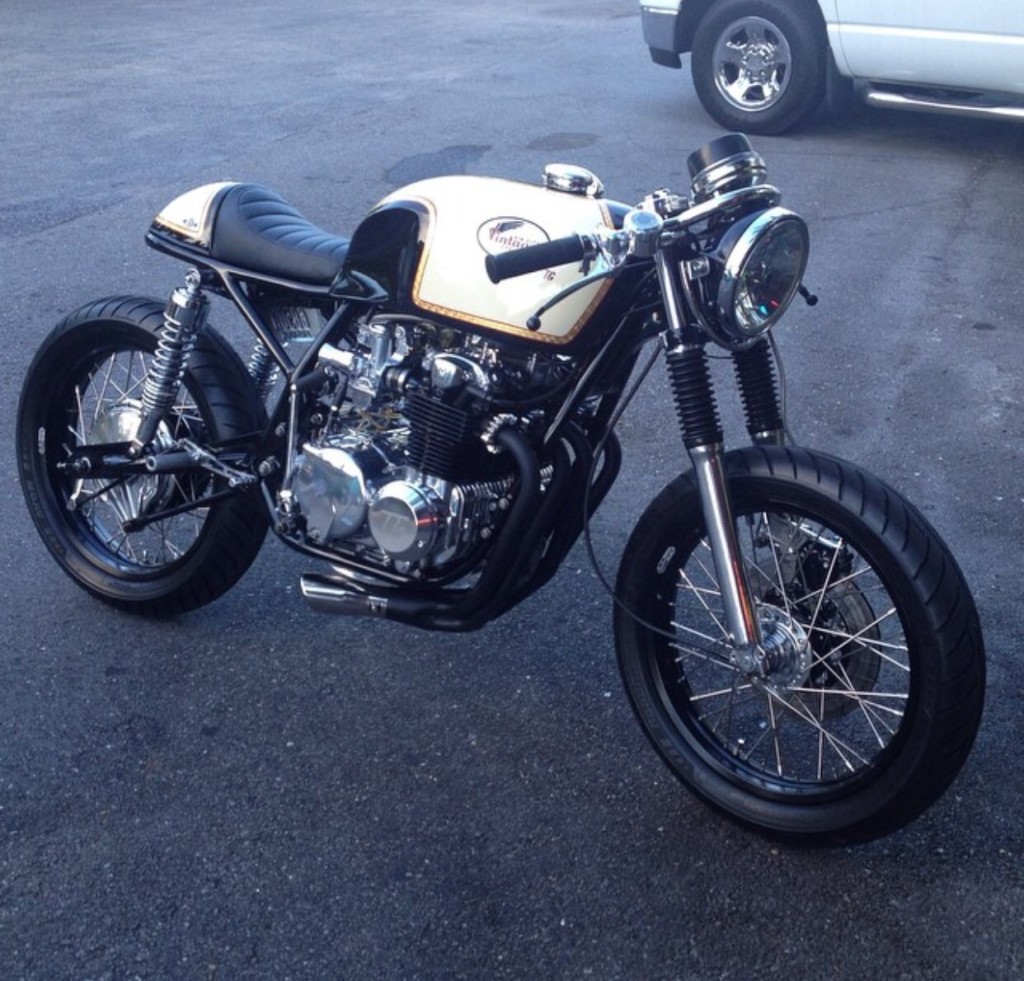 A little bit of background of myself and Sin City Vintage Cycles. I grew up in a motorcycle shop here in Waterbury, CT, called Doc’s Motorcycle Parts. My father opened the shop back in 1969, and my earliest childhood memories are of spending time in the shop and all of my dreams and aspirations involved motorcycles. Even in those early days, I was addicted to racing bikes, drag racing, motocross, hill climb, road racing…I just loved all aspects of motorcycle racing. So when I got older and started working on and building bikes, I always had that racing influence and tried to incorporate that simple form and function design into anything I built. The other major influence I take is from the Harley scene where bikes were usually built with overall appearance being the most important design element. So in general, when I am building a bike, I try to first make the bike perform and handle to the best of its ability, second I try to make the bike as simple and clean as possible, and lastly I then try to make it as appealing to the eye as possible. Sure at times there has to be concessions made to each of those aspects, but overall this is what I set out to accomplish. Eventually I left my father’s shop to pursue a different career path, and after a couple years of being out of the motorcycle industry, I got the itch to start building bikes again. I built and sold a couple bikes and people started to take notice so I started Sin City Vintage Cycles. What makes my shop different than a lot of the others out there is that I work out of my garage. Granted most garages don’t have 3 bike lifts, a Bridgeport, lathe and metal working tools in them, but I am able to build bikes with zero overhead costs. I build these bikes because I love to build bikes and not to make money, so that is very important to me. I am also able to pick and choose the projects that I work on. For me, to build a bike for a client a couple things have to align properly. It has to be a brand and model bike that really appeals to me and the client and I have to have a clear understanding of what the finished bike will look like. If all these things match up then we move forward. And finally, I think the most important thing that separates me from other builders is that I only build one motorcycle at a time. For me it is the only way I can truly build a one of a kind custom where I can dedicate the proper amount of time and attention to every single detail of that motorcycle. So Tim Gerst contacted me because he saw a bike I had built advertised for sale. He wanted to build a heavily modified CB550 and his vision for the bike mostly matched what I wanted to do with one. So after emailing back and forth and solidifying some details I got to work. I first had to find a bike for him because he didn’t own a CB550, so after searching I found the perfect bike–0nly problem is that it was 12 hours from me in Ohio somewhere. I’m not going to lie, that drive sucked, but it was well worth it because although the bike wasn’t running, it was straight and functional. The process of building the bike was the same as all my bikes. I start with stripping all the unnecessary crap and electrical, cut the back half of the frame off, and start building back up. Tim’s bike is cool because the supports on the frame to support the rider and rear shocks were completely changed to give a more aggressive weight forward riding position, while making the back half look cleaner. After that I moved to the gas tank. I cut the original gas tank so that just the bottom of the tank was left. This allowed me to retain Honda’s original rubber mounting which keeps vibrations to a minimum. So the top of the tank is built and welded to the original bottom and the end result is a handmade tank utilizing stock mounting. Shock mounts were then modified to look cleaner and give the proper tire to frame clearance, the seat pan and tail section were hand formed, rear set mounts were welded on the frame, unnecessary mounting tabs removed, and from there it is disassembled. While the frame and bodywork were off to paint I then go through the motor. Completely disassembled, polished, powder coating, replacing any worn parts and reassembly. When the frame returns from paint, it’s reassembly time, and this is where I really enjoy the building process. As the build progresses I try to perfect every aspect of parts, spacers, mounting, and positioning of various components. Because we weren’t running a front fender, the fender mounting bosses on the lower legs were removed in the lathe to give the lowers a clean look. Aluminum spacers were made to join the gators to the lower tree so wire ties weren’t needed. I milled an aluminum upper triple tree, an ignition cover, and too many to list mounts and spacers. I wanted to use velocity stacks but I disliked any of the aftermarket ones so I milled four velocity stacks and built screens into them to keep and rocks or road grime from being thrown in them from the rear tire. Laced and trued the wheel hubs to aluminum rims with stainless Buchanan spokes. Once the bike was finished, I used the dyno at Doc’s to get the carburetors dialed in. While it was time consuming and I probably tried 25 different jet combinations I was able to get the stock carburetors with velocity stacks perfectly jetted which I was told numerous times couldn’t be done. Maybe it was dumb luck but the bike runs as good as it looks. I am happy with the end result, my client Tim loves the bike, and for me the most satisfying part is that if I had a CB550 café racer, this is the exact bike I would have built for myself. Leave a Reply to Todd Cancel