They say imitation is the sincerest form of flattery and, in this case, it has resulted in an amazing build by Andrei, the fabricator/magician at BBCR Engineering in St. John, Indiana, just outside of Chicago. Andrei has previously been known for his CX500 creations, one of which, the BBCR507, was featured on Pipeburn. Here, he turns his talents to the CB750, after being inspired by the Classified Moto SuperStrada. High inspiration indeed, as the SuperStrada was Bike Exif’s Bike of the Year in 2013. It has spawned a host of imitations. There is always some question as to the ethics behind inspiration and imitation — particularly if the end product is going to be sold to a consumer — but it’s hard to gainsay the level of execution in this build. Beginning with a stock 1979 CB750F, Andrei stripped it to the last nut and bolt and went to work. Nothing was left untouched. Tossing the complete front end, it was replaced with the components from a 2014 Yamaha R6, including the forks, rotors, calipers, and controls. Obviously, this is not a simple swap as it involved a new stem, bearings and stops. Cognito Moto fashioned a custom triple tree, into which a MotoGadget mini speedometer and lights were incorporated. A push button MotoGadget M lock ignition resides there as well. To maintain the clean lines, the speed sensor was moved out of sight to the rear wheel. Turn signals were crafted with LED lights on the front fork which are essentially invisible until activated. The rear subframe and swingarm likewise saw the trash heap, replaced by a Ducati single-sided swingarm and mono shock rear suspension. All of the underseat electricals were relocated and custom stainless steel side covers fashioned. This beauty rolls on Marchesini 17-inch wheels at both ends. The engine was completely rebuilt, then primed, base coated and cleared with automotive high temperature paint. It breaths through a 4 into 2 manifold setup with Mikuni carbs. The spent gasses depart through a BBRC-designed stainless exhaust capped with a Werkes muffler. The rearsets and controls were lifted from the R6 as well and modified to fit as far back as possible to create the café racer stance and riding position. A new tail and fiberglass seat unit was crafted and the seat was upholstered by Luna’s Custom Upholstery. The frame was powdercoated in black and the paint applied in house. 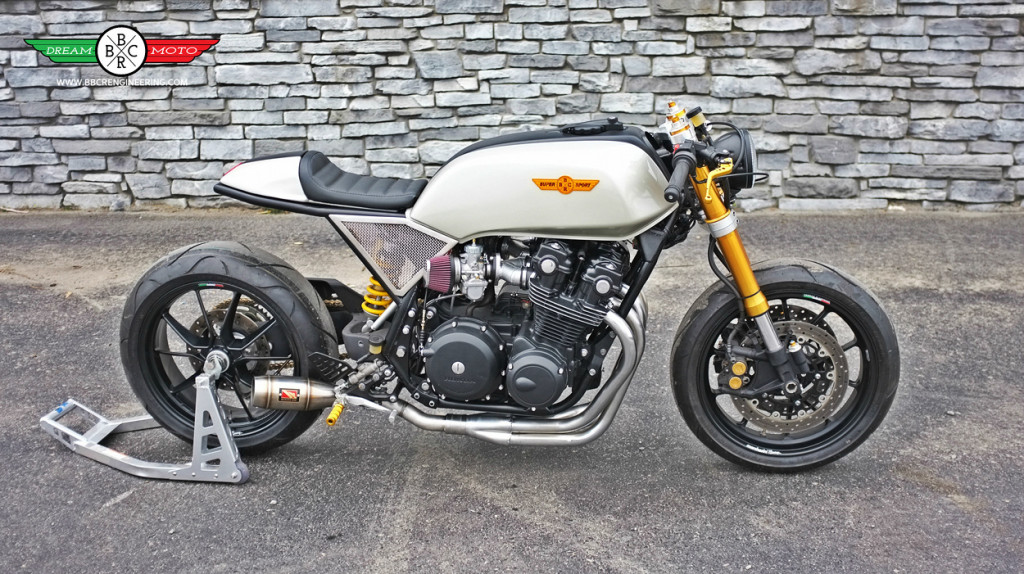 Andrei’s goal was to blend the old and new into the ultimate modern café racer and we have to acknowledge that he has succeeded. It took him almost a year to create this immaculate and impressive ride.