The Challenge:  Turn a boring cruiser into an exciting sports bobber.

Unlike most cruisers, the Kawasaki Vulcan S features a 649cc parallel twin adapted from Kawasaki’s ER6 range. The motor offers a healthy 61 horsepower, and views of the ride have been largely positive. Visor Down:

“It’s not often that I enjoy riding a cruiser. In fact, if I’m perfectly honest, I’ve never actually had fun on one until today.” In the aesthetics department, however, the Vulcan 650S seems to suffer the same fate as many of its contemporaries. It looks chunky and overweight — more Transformer sled than badass bobber. Enter Revolt Cycles of The Philippines, who are always up for a challenge. They set out to turn this boring cruiser into a bull of a sports bobber, stripping down and beefing up in all the right areas. The result is the aptly-named “Toro.” Started as a boring stock sports cruiser turned to an exciting sports bobber. We basically stripped the whole bike down and studied on how to make it look meaner and better by as much as possible — a minimal but extensive clean work as if it came out as factory-equipped. The work done is cutting and shortening the subframe and rear fender then installed a integrated signal light/tail light for a proper tail tidy and retrofitted a TOCE exhaust for that mad rumble. We wrapped a pair of slick Pirelli Angel GT rubbers for that slick look. 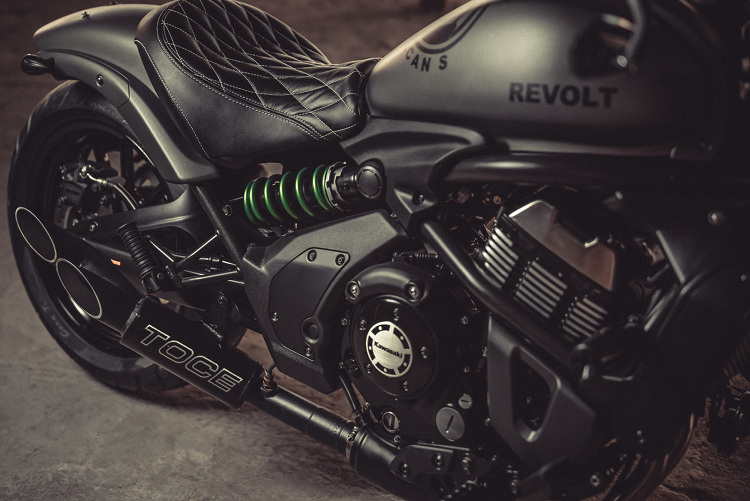 A custom made radiator grill to add a little more beef. Redid the seats and converted to a single seater but a ready bolt-on pillion seat for that extra company. Custom reupholstered saddle with diamond stitched high grade leather by our good friends at @leridakustomnleathers. We turned then to the face of the machine by taking the ugly looking headlight and replacing it with a Lucky 13 LED projectors on a custom fabricated bracket for that perfect fit. Replaced the stock handle bars with some aftermarket Protaper and paired with bar end side mirrors for that bull visual. Topped everything off with a fresh coat of matte gunmetal grey paint and a custom bull decals on the tank. That basically sums up the build keeping it nice and simple yet cool and badass just the way we like it.