Tom Gilroy, founder of Australia’s Purpose Built Moto, is on a roll. Not only has his Gold Coast shop been turning out a stable’s worth of custom bikes, but he’s been manufacturing a veritable arsenal of custom parts, including LED Lights, Headlights, CNC triple clamps, custom mufflers, and more. More and more often, we’re seeing PBM parts turn up on the customs bikes we feature throughout the world, particularly their stainless steel mufflers. Now Purpose Built Moto is back with their first build of 2018, and it’s a special one. The owner, Drew, was one of the very first people to work through the shop doors when Purpose Built Moto opened in 2015. He had a GN250 itching for the PBM’s signature scrambler treatment. Below, we get the full story on this street and trail ripper! I’m a Parts Designer and Manufacturer of LED Lights, Handlebar switches and Other electronics as well as mufflers. Purpose Built Moto has really been gaining steam in both our custom builds and parts manufacture. Here’s our first offering for 2018! 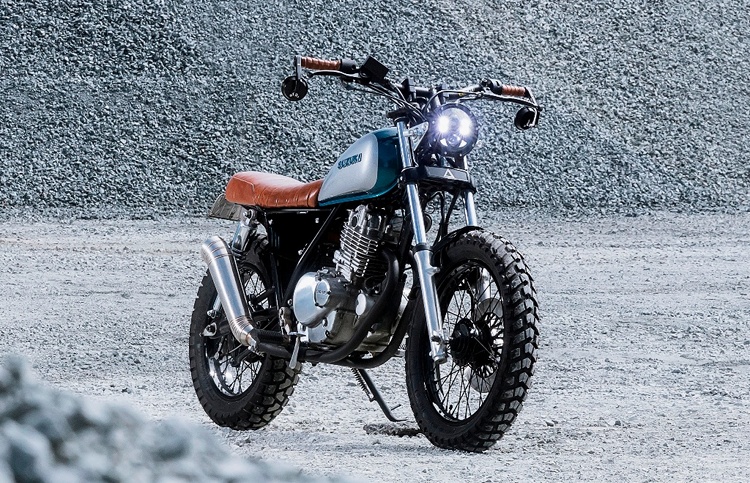 Drew was one of the first guys through my door when I started PBM in 2015. He always wanted a scrambler kit-out on his beloved GN250 but it took us 2 years to get it into my garage when the timing just lined up right! Admittedly this bike will be mostly on-road. I wanted to build him something that not only looked the part, but if he felt the itch to thrash up a dirt track the bike was right there ready and capable. The GN received a suspension lift, custom fabricated muffler and subframe with a whiskey brown seat. As per usual the little scrambler was hit with the full Purpose Built Moto treatment of LED lighting and electronics. When the fabrication was complete and the bike stripped for paint and polish, the fresh gloss black wheels were hit with some beastly Heidenau K60 Scout tyres. The colour scheme was a little point of contention, I was adamant that the bike needed to be a metallic teal colour offset with the black and deep silver. The rider was a little skeptical at first but now I think he’s glad he trusted me! The final piece during assembly was the custom battery box/electrics tray and hand made side covers. Backed with a colour matched teal mesh.

I’m beginning to find my own style with the scramblers I build. There’s definitely an intentional nod the the classic off-roaders, but being surrounded by modern tech I also have influence there. Old soul, new tech is what I would call it. Usually I would say the best part of the bike is the outside the box colour scheme that I think works really well. However on this bike, the thing I’m most proud of is that Drew (the owner) and I met over 2 years ago, during that time he could have gone anywhere else to get his bike customized but he waited it out to come to my shop and have me do the work. As a customizer and builder that puts a lot of myself into the work I do, that to me is something really special. GRID Cycles: Zero SR Street Tracker - “We want to get people excited about electric motorcycles.” Love them or hate them, electric motorcycles are going to be part of the two-wheeled future. Kawasaki has announced plans to go all-electric by 2035 in […] 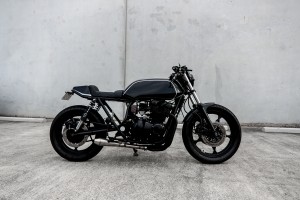 Feature Film: HANDCRAFTED - ﻿ Recently, we were given an early look at the new film Handcrafted — an insider’s look at the Australian custom motorcycle community created by Electric Bubble and Purpose Built Moto. The filmmakers followed Tom […] Yamaha XSR900 Custom by Purpose-Built Moto - In the 1970s, the Universal Japanese Motorcycle (UJM) revolutionized the industry — a general-purpose, rider-friendly machine that made motorcycling more accessible to the public. These naked/standard designs had upright ergonomics and powerful, reliable engines. Within […] Yamaha SR400 Scrambler by Purpose Built Moto - Tom Gilroy of Purpose Built Moto has quickly made a name for himself in the Australian custom motorcycle world and beyond. His scrambler builds have been hugely popular and both amateur and professional builders around […] Leave a Reply to Shep Cancel