The KTM Duke 390 has gained immense popularity across the globe. Weighing in at just 306 pounds dry, with 43-hp on tap, the bike has been called “whippet-thin” and “a proper rocket-powered scalpel.” Enter the crew from Revolt Cycles (#RVLT) of The Philippines, who took on this Duke 390 as their 30th build. The owner wanted a tracker-styled machine that was all black — with none of the bright orange anodized hardware from the factory machine. The RVLT team aptly named this black prowler of a bike “Pantera” — meaning “panther” in Spanish. Below, we get the full story, as well as an array of killer shots from the ever on-point Jeb the Photo Mercenary. We humbly like to present our 1st and latest build for this year 2018. Our first time working on a 2014 KTM Duke 390 build which is very popular around the country and worldwide for its stunning modern looks, performance, and a good entry level motorcycle for those who wants to hop on the saddle.

As to most KTM Duke, it entered the garage as the standard KTM colors with a bright anodized colored matching accessories like side mirrors, brake levers, handlebar, bar clamps and down to the smallest bits like bolts, washers, caps, etc. Not to mention some random stickers stuck around the bike for that increased performance look lol. Like to all our builds, we treated the Duke as if it was our own personal bike. We took the time to study how we can change the look to a more classic style and by stripping the bike gave us a more understanding about its frame, geometry and style but as more we got around, the latter wasn’t really meant for the KTM.

The owner’s wish was simply to make it to a tracker style and quoted all “BLACK”!

We then stripped down all the bright-colored anodized accessories by diluting/dissolving them in this simple household product, the “liquid sosa” — it was our best friend for this build undertaking a lot of time to strip the anodized paint but all worth revealing its true aluminum color and by giving it a light polish. To most of our builds, the first and major task that we do are the wheels. Either by refurbishing, restoring, customizing or in this case changing the color meaning stripping the old orange out and spraying a fresh coat of matte black. Topping it off by wrapping them wheels with Shinko 805s for that dual purposed ride. 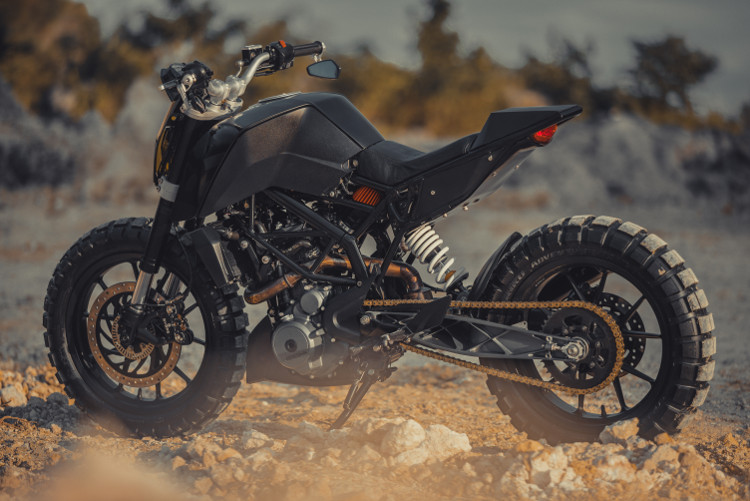 As we progressed to this stage, we decided to retain the original tank design and giving it a gloss on matte black accent with our RVLT Cycles logo wrapped at each side of the fairings. To pair the front end to the body, we decided not to use the conventional round headlights but an aftermarket Powerpart Headlamp that is designed for the KTM Duke, painted in black wrapped with a gloss RVLT decal and yellow tinted lens on it. Now this is where the fun part begins as we move to the rear end of the bike, taking out all the plastic fairings, removing all the tabs and chopping 1/4 of the subframe then fabricating a new pointed style tube at the end. We tucked all the essential “electricals” under a fabricated seat pan along with a detachable seat wrapped with black quality grade leather with customized seat cowl cover. Integrated the stock tail light to a custom made mudguard for that sleek clean tail tidy look. Challenging part was separating the frame from the motor basically removing all the parts, wirings and etc attached to it for a clean proper clean, respray of gloss black and preparation. At this stage all parts were prepped and painted for the rebuild phase. Some other custom bits like aftermarket bar-end side mirrors, pod filter and an aftermarket M4 exhaust system for that mean beautiful note. To top off the build with all the parts in placed and done, striking with the smooth gloss and matte black textures, and a beautiful stance on the prowl for its prey the name PANTERA was coined translating from Panther in Spanish language.