In the early 1980s, Suzuki set to work developing a machine that could outperform the formidable Honda Interceptor. In 1984, they released the GSX-R400, an aluminum-framed four-cylinder sportbike that was nearly one-fifth lighter than comparable bikes on the market. Said lead engineer Etsuo Yokouchi: The GSX-R750 arrived a year later, introducing a “humpback” aluminum frame and a host of weight-saving measures, going so far as to use aircraft rivets instead of welding. Other innovations such as Suzuki’s Advanced Cooling System (SACS) and a re-engineered rear suspension linkage set the GSX-R apart from contemporary rivals. “The thing was so FAST… Fidget about to take the weight off your wrists and before you can say magistrate all the cars are in reverse. Hit 9000rpm and your bum slides backwards, your arms tense with the effort of keeping up with a motorcycle hell bent on breaking the sound barrier.” —Bike magazine, 1993

Enter Francisco and crew from Portugal’s Rusty Wrench Motorcycles, located on the country’s stunning Algarve Coast, where they have a brick-and-mortar store, apparel brand, and their great passion, a custom workshop:

“Transforming and making two-wheel dreams come true is our mission! For RW Motorcycles, a motorcycle is not just a vehicle, it is an extension of your personality, of yourself…“ In this case, that dream stemmed from the Japanese concept of Bushido — literally, “The Way of the Warrior” — the code and customs that defined the samurai way of life. This GSX-R1100 “Bushido” is a tribute to that philosophy and to the original 1980 Suzuki GSX1000S Katana, a bike whose angular lines and radical styling would influence superbike design for decades to come. These hard, uncompromising lines can be seen in the bike’s handmade aluminum and sheetmetal bodywork, cladding the bike like a lightweight suit of armor. From the fenders and fairings to the side covers and engine spoiler — all are hand-shaped, painted dark gray with subtle red details.

The bike is now running minimalist Motogadget electronics, eliminating much of the original wiring, and the brakes, suspension, tires, and lighting have all been upgraded. In our opinion, RW Motorcycles have created a fitting tribute to the original Katana, a dark twin with immense power and a sinister edge.

Below, we get a few more details on the build, as well as more stunning shots from photographer Paulo Teixeira. This way of life — Bushido (originally “Buxido”) — is based on the loyalty, fidelity, justice, kindness, braveness, honor, glory and, above all, living and dying with dignity.

The handmade parts were all done in sheet metal and aluminium, such as:

Other Custom Parts and Work:

The color of the motorcycle is dark grey and black with red details. The seat is made in alcantara and leather. Algarve Airhead: BMW R65 Roadster by RW Motorcycles - A classy airhead from Portugal’s Algarve Coast… In 1978, BMW introduced the R65 as a 650 middleweight to the airhead lineup. While the bike had the same frame as the larger R-series machines, it had […] Big-Bore Weapon: Suzuki GSX-R1100 “Bushido” - Rusty Wrench Motorcycles builds an 1100cc weapon… In the early 1980s, Suzuki set to work developing a machine that could outperform the formidable Honda Interceptor. In 1984, they released the GSX-R400, an aluminum-framed four-cylinder sportbike […] Black Mamba: Honda CBR929RR by RW Motorcycles - Inspired by the world’s fastest, most dangerous snake… In 2000, at the very outset of the 21st century, Honda introduced the CBR929RR — the fifth-generation of the Fireblade series of open-class sport bikes, and the […] Faro Way: Triumph Bonneville Brat - Last year, we had the pleasure of road-tripping across Portugal — a nation where custom motorcycle culture is truly taking flight. Given the stunning riding roads along the coast and in the hills, it’s no […] 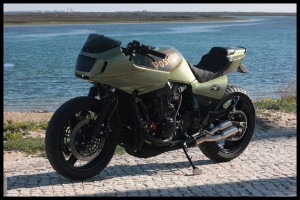 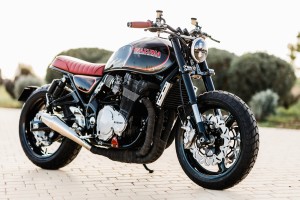