The Suzuki TU250, better known as the Grasstracker or Volty in some markets, is a lightweight single-cylinder street bike introduced in 1994 — a throwback to the UJM machines of the 1960s-70s, featuring an air-cooled two-valve SOHC engine and twin-shock rear suspension:

“Bog standard out of the box, this little Suzuki TU250X looks like a wee cracker. Its retro styling is a nod back to seventies cool, even down to the wide, square brake pedal with rounded knurls and a narrow gauge gear lever.” — MCNews.com.au While the TU may not be a heavy-hitter in the power department, it’s become a favorite of one of the world’s most renowned custom builders, Kengo Kimura of Heiwa Motorcycle. Born in Hiroshima, Kengo began riding motocross at the age of 10 and bought his first street bike in high school, a Suzuki Wolf 250. At the age of 23, a femur fracture forced him to retire from racing, but he’d already begun working in the custom department of a local shop. 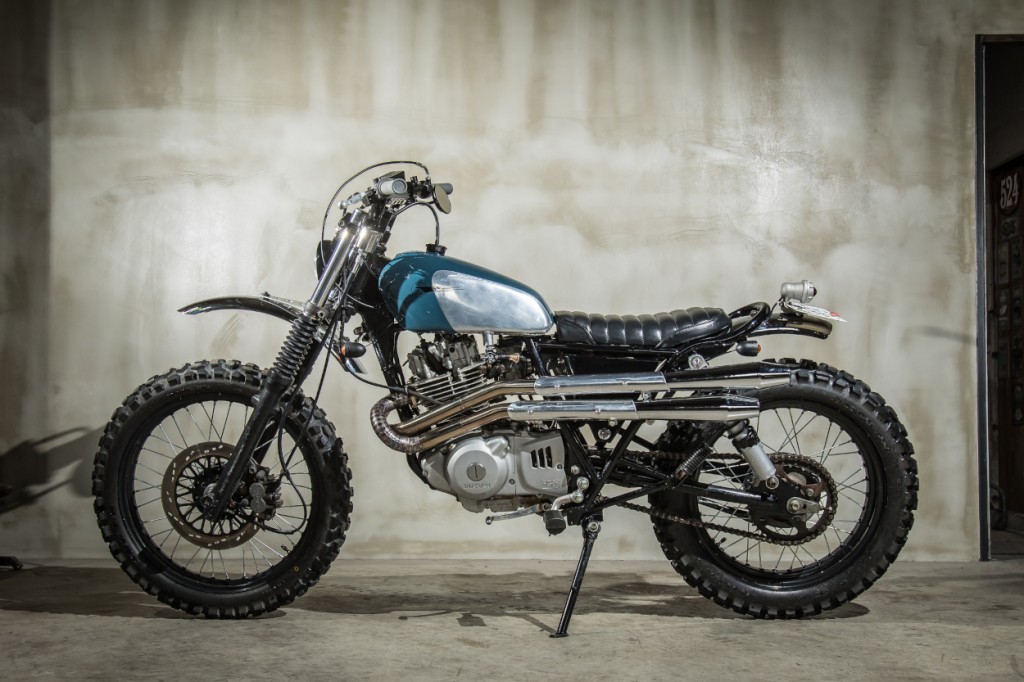 In 2005, Kengo struck out on his own, opening his own workshop, Hiewa Motorcycle:

“The company name means ‘peace,’ a paean to his city’s post-nuclear cry for world harmony…” —The Vintagent His work soon brought acclaim and attention to the small Hiroshima-based shop, especially through his “MasterPeace” and “Dirty Pigeon” Triumph TR6 builds, both of which took “Best in Show” at the prestigious Yokohama Mooneyes Hot Rod & Custom Show. Today, we’re thrilled to showcase a bike that Mr. Kimura built just for himself, a 2001 Suzuki TU250 scrambler — aka the “Grass Tracker 004.” His intent was to show that he could transform a street bike into a scrambler that both performed well off-road and looked good in town.

The tank is an aluminum RM unit that Kengo modified for the TU, and the fenders are both one-off pieces. The exhaust is a stunning handmade 2:2 stainless-steel system that wraps around the left side of the bike, complete with heat shields and reverse cone mufflers.

Kengo went with a thinner one-off seat than he’d put on a full-on off-road bike, upholstered in vinyl for easy cleaning, and he tidied up the rear of the bike by modifying the existing seat rails, creating a rear loop and adding a minimalist brake light and indicators. He rewired the bike with an eye toward simplicity and turned to Ninben for paint. The cockpit features a set of Renthal bars, mini switches, and a 4.5-inch fog lamp. Our favorite part? It has to be this oil tank he fabricated, which is actually a reserve fuel cell! The TU looked amazing when it rolled out of the workshop, but it was important to Kengo to prove that it could perform well in the dirt. Says Mr. Kimura of the riding experience off-road:

“I felt that the suspension was strengthened and the potential was as high as that of ordinary dirt bikes. It was solid and light on the street and on the highway. I was able to prove that I could do it.”

Below, we get the full details on the build from Kengo himself.  Many thanks to Kazuo “Kaz” Matsumoto (@steeldog_photo) for conducting the interview with Mr. Kimura, and for the stunning photos! • Please tell us a bit about Mr. Kimura, his history with motorcycles, and the Heiwa workshop.

Kengo Kimura was born in Hiroshima, Japan in 1973 and still lives in Hiroshima. He first experienced motocross when he was 10 years old and got his license when he was in high school and he bought a Suzuki Wolf 250. Around this time, he started motocross in earnest, obtained a domestic A-class license, and was active in the racing world. However, at the age of 23, he suffered a serious injury (femur fracture) and retired from racing. (He now appears occasionally in vintage motocross races.) After that, he started working at a motorcycle shop when he was 22 years old after graduating from college and was assigned to the custom department in this shop. Mr. Kimura became independent in 2005 and opened his own shop called Heiwa Motorcycle. His customs have been highly evaluated not only in Japan but also by motorcycle fans all over the world, and he is sometimes invited as a guest or judge at overseas motorcycle shows. Produced for promotion. (Personally owned.) He wanted to make a scrambler based on a street bike and demonstrate that he could ride it on rough roads such as dirt roads. Scrambler. It’s the ultimate form of motorcycle that you can ride, cool on the streets and in the mountains. He made it not only for riding in the woods but also for looking cool even when in the city. For example, off-road bikes often have thick seats, but street bikes often use smaller ones. He took those habits and aimed for just the right design. The muffler is Mr. Kimura’s original. He also made the reserve fuel tank that looks like an oil bag.

The aluminum gasoline tank is made by processing Suzuki’s RM tank. The area around the seat rail is hand-made, and also the front and rear fenders. As for the impression when he actually rode the bike off-road: “I felt that the suspension was strengthened and the potential was as high as that of ordinary dirt bikes. It was solid and light on the street and on the highway. I was able to prove that I could do it.”

There was a kick arm on the right, so the two mufflers on the left are very impressive. Leave a Reply to Eric Cancel