The original Yamaha V-Max remains one of the most beastly two-wheeled production bikes ever conceived, a 145-hp V4 cruiser that could blast down the 1/4 mile in a shade under 11 seconds. Unlike a sportbike, where you’d find yourself hunched over the tank like a horse jockey, your boots on the rear-set pegs, your body crouched in an ideal position to absorb the face-melting acceleration forces, the V-Max kept you in an upright position, threatening to tear your arms from their sockets.

“Throw a leg over the stepped saddle, point Yamaha’s V-Max in a safe direction and pull the trigger. It might be smoking now but this isn’t the gun — it’s the bullet.” –Cruiser The bike was developed by a small team of Yamaha engineers with the mission of creating the most powerful V4 motorcycle known to man:

“Back in 1985, some bright spark in their R&D department stripped half the weight off their 1200cc V-four Gold Wing-aping full-dressed Venture tourer, tuned up the engine and gave us the craziest, least practical motorcycle we’d ever seen that looked like it was styled by Batman.” –Bennetts

The V-Max’s insane straight-line performance was matched only by its woeful inadequacies in the handling department. But then, that potentially lethal combination of high power and poor handling gave the bike a mystique not unlike the triple-cylinder two-stroke Kawasaki “Widowmakers” of the 1970s. And in the tradition of the V8 muscle cars of yesteryear, stoplight-to-stoplight is what matters most — and here the V-Max reigned supreme. Enter our new friend Gonzalo from Argentina’s MotoRockers Garage, who started building/fixing his friends’ bikes out of his home garage and found his clients growing until he needed to open his first speed shop.

“In 2020 I knew it was time to push the shop to the next level, so I moved to a bigger garage, bought the necessary equipment, and nowadays we build our own parts. We have a machine room where we fix engines and a paint room also. We can modify, fix, and customize any bike from end to end.” The bike you see here is an ’88 V-Max built for a client who had an idea of the colors he wanted, to which Gonzalo and crew added their own style and American muscle bike inspiration. Built over a one-year period, this V-Max has a modified subframe, custom tail, handmade saddle, relocated fuel system, handmade inox silencers, custom paint sprayed in-house, and tons of custom accessories — many of them fabricated in the shop. When we asked Gonzalo if the bike has a nickname, we weren’t too surprised at the answer:

“Not officially, but it’s THE BEAST for us. It’s the biggest bike we have ever built.”

Below, we get the full details on the build and more gorgeous shots from photographer Jony Paz  (@jony.paz). I have always been a bike lover, so I decided to start building them about four years ago, in 2017, in Mar del Plata, Argentina. It all started in my home garage, fixing my bike and making some arrangements to my friends’ bikes. At first it was a hobby but then it turned into business. One year later I realized I had more and more clients who wanted me to modify their bikes, so I made a move and officially opened my first speed shop, where I could have more space for bikes and also sold accessories, clothing, and original parts.

In 2020 I knew it was time to push the shop to the next level, so I moved to a bigger garage, bought the necessary equipment, and nowadays we build our own parts. We have a machine room where we fix engines and a paint room also. We can modify, fix, and customize any bike from end to end. This bike was built as a customer project. We started in February 2020 and finished it in January 2021. Our client had an idea of the colours he wanted for the bike, so we took that idea, added some references from American muscle bikes, and finally included some inspiration from our own style. 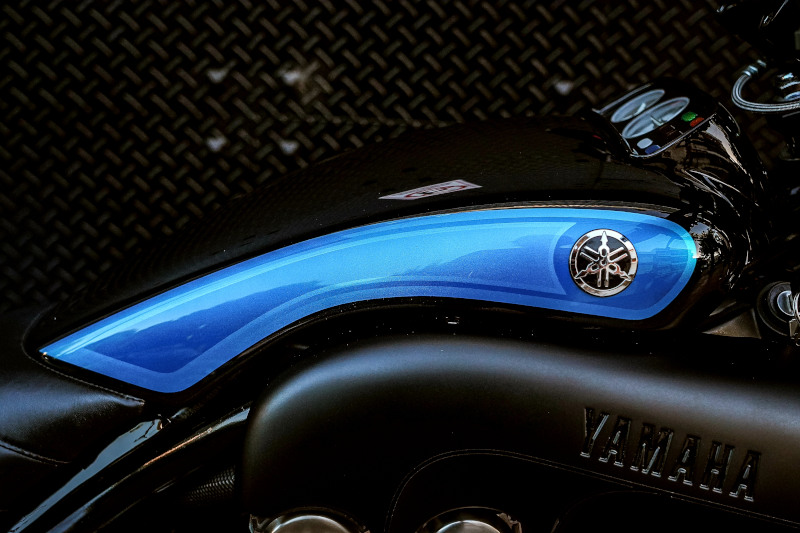 Not officially, but it’s THE BEAST for us. It’s the biggest bike we have ever built. A really, really powerful sensation. And the sound, it’s so loud. Sounds like a racing car.

We spent lots of hours designing and manufacturing the rear part of the bike, but it was totally worth it.