“The absolute hands-down craziest 701 on the planet…”

The Husqvarna 701 Supermoto is one of the most potent hooligan machines ever created, a 320-pound supermotard with a 72-hp 693cc big-bore single pulled straight from the KTM 690 Duke. In addition to the one-wheeled antics such a machine promotes, the bike also performs damn well with both tires on the tarmac:

“The 2017 Husqvarna 701 Supermoto is perfect for the track, the canyons, or daily life.” —Cycle World Enter our new friends from RATicate Racing of Oakland, California — a shop formed in 2017 by a trio of friends:  Frank Palestini (the “taste” of the group with a natural eye for aesthetics), David LaBree (road racer and track day instructor), and Ronnie Fike (jack of all trades and graphics designer). Four years ago, Frank was riding his 2017 Husqvarna 701 when a driver pulled an illegal left-hand U-turn right in front of him and there was no avoiding an impact.  The wreck put Frank in the hospital with a collapsed lung and several broken ribs, and the Husky was in even worse shape:

“The bike was snapped in half (at the triple clamp) and we didn’t want the insurance company to scrap it, so we decided to rebuild it from the ground up.” At first, they were going to do a simple rebuild, but somewhere along the way, but things turned more serious:

“We wanted to build the absolute hands-down craziest 701 on the planet. What started off as a simple rebuild turned into a year-long process of creating our vision for what we thought the 701 should be.” GP Frame & Wheel of Sacramento straightened the frame, which was powder-coated, and the suspension was upgraded with custom GP Suspension fork cartridges and an Öhlins rear shock. The bike is rolling on a set of Warp 9 wheels with a Tekmo Racing swingarm. Up front, a Brembo M50 front caliper puts the clamps on a BrakeTech iron front rotor, and the bike has CoreMoto brake lines and Verah pads. 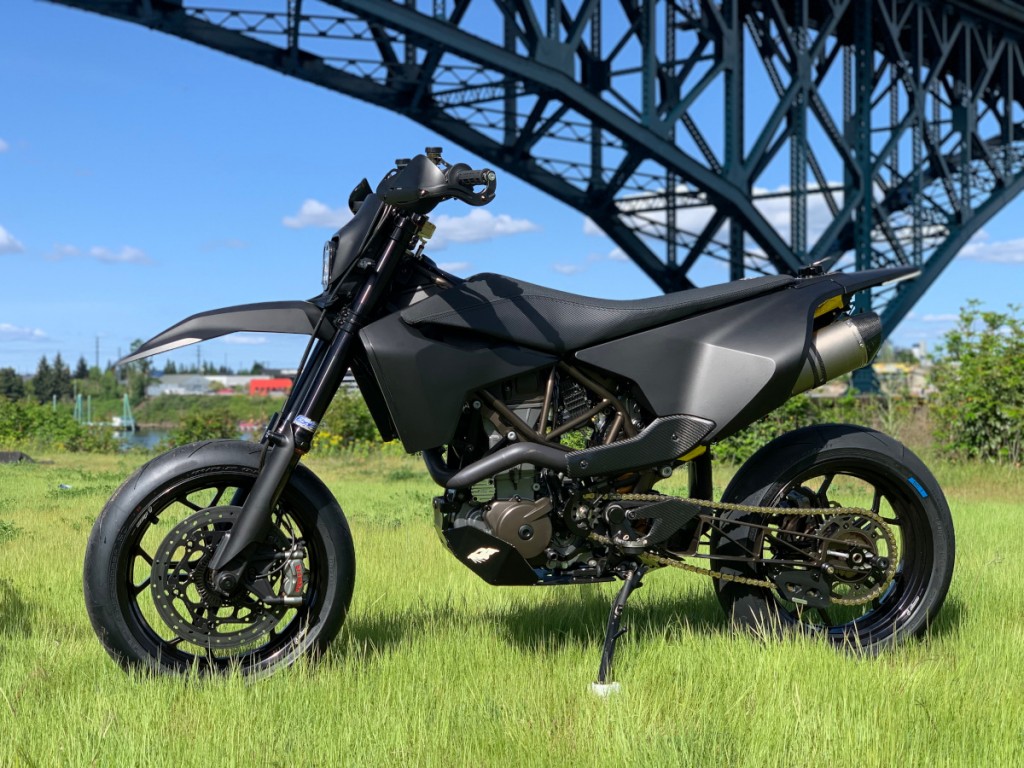 The engine now breathes through a Rottweiler Performance intake and SC Projects exhaust, and bike has titanium bolts all around…and that’s just a taste of the bike’s modifications. The RATicate boys say the bike’s performance is as insane as its looks, with razor-sharp handling on the street and track:

“The bike is an absolute blast to ride and compliments our KTM 1190 SM build. These bikes are for riding and not just thrown in the back of a truck, both builds have been to the racetrack several times.” The RATicate Racing supermotos were highlights for us from the 2021 One Moto Show, but we didn’t know what a special story there was behind this 701 weapon until we got in touch with them after the show.

“We are just extremely proud that not only did this bike not get turned into scrap metal at a junkyard but that it is in all likelihood the trickest Husqvarna 701 supermoto on the planet.” RATicate Racing was formed in 2017 by Frank Palestini, David LaBree, and Ronnie Fike. Our first official project was rebuilding the Husky 701 after a driver pulled an illegal turn in front of Frank. The bike was snapped in half and we didn’t want the insurance company to scrap it so we decided to rebuild it from the ground up. Since then we have built several other bikes from the ground up and continue to try and push ourselves with each new build. We build our bikes in Oakland, California, and the three of us each bring a unique trait and skill set. David is a road racer, instructs at a trackday organization and has been building engines and doing fabrication for decades. Frank is what we like to call the “taste” in the group; he is a natural builder and has a keen eye for aesthetics. Ronnie is a jack of all trades at the shop and our resident graphics designer; he is credited with the creation of our logo. 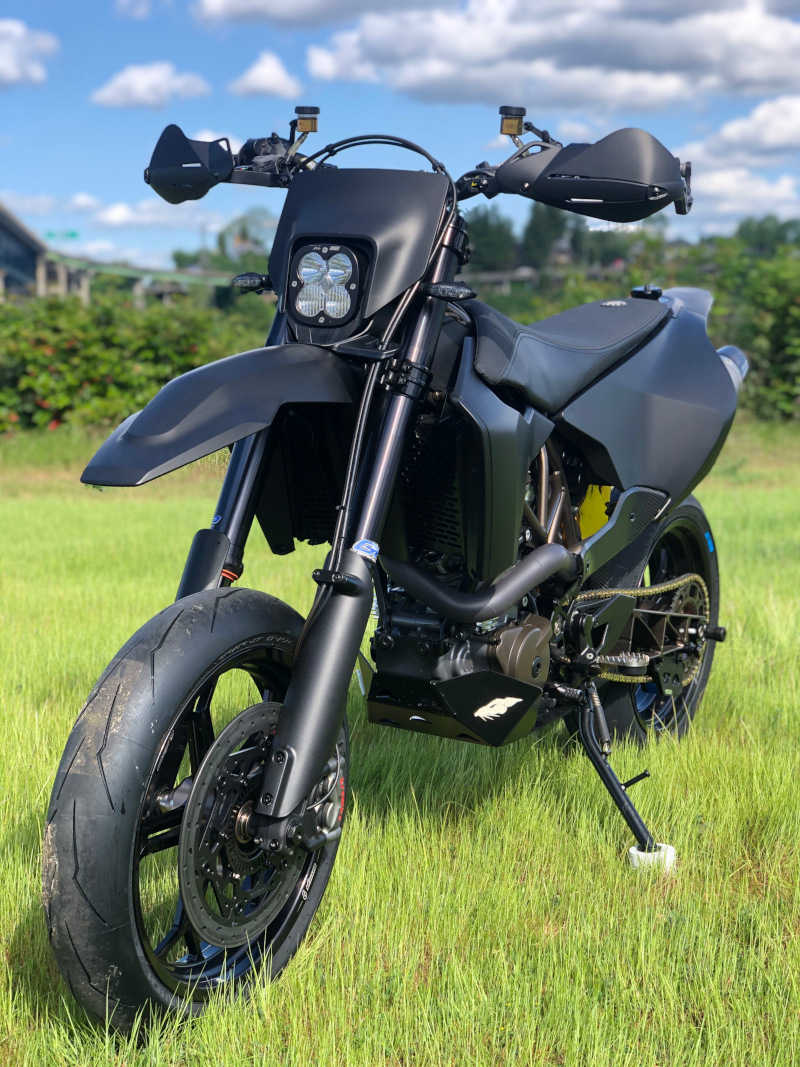 As mentioned above a driver pulled an illegal U-turn in front of one of our founders, Frank. Frank was in the hospital with a collapsed lung and several broken ribs. The bike had snapped at the triple clamps and was in a sorry state. Instead of letting the insurance company take the bike we decided to bring it back to life and the build process began. We wanted to build the absolute hands-down craziest 701 on the planet. What started off as a simple rebuild turned into a year long process of creating our vision for what we thought the 701 should be. Not really we just call it the Husky 701. About as insane as it looks. Having 70hp on top with top-notch suspension makes this bike handle like an absolute dream. The combo of the GP forks and the Öhlins shock make the bike razor-focused, able to carve through turns like no other Supermoto. The Brembo m50 front brake with Brake tech rotor means anytime you hit the front brakes your eyeballs pop out of your sockets. It is absolutely a hooligan machine but at the same time is just at great as tearing up local canyons as it is at doing wheelies into the sunset. We are just extremely proud that not only did this bike not get turned into scrap metal at a junkyard but that it is in all likelihood the trickest Husqvarna 701 supermoto on the planet. Leave a Reply to Randal Cancel