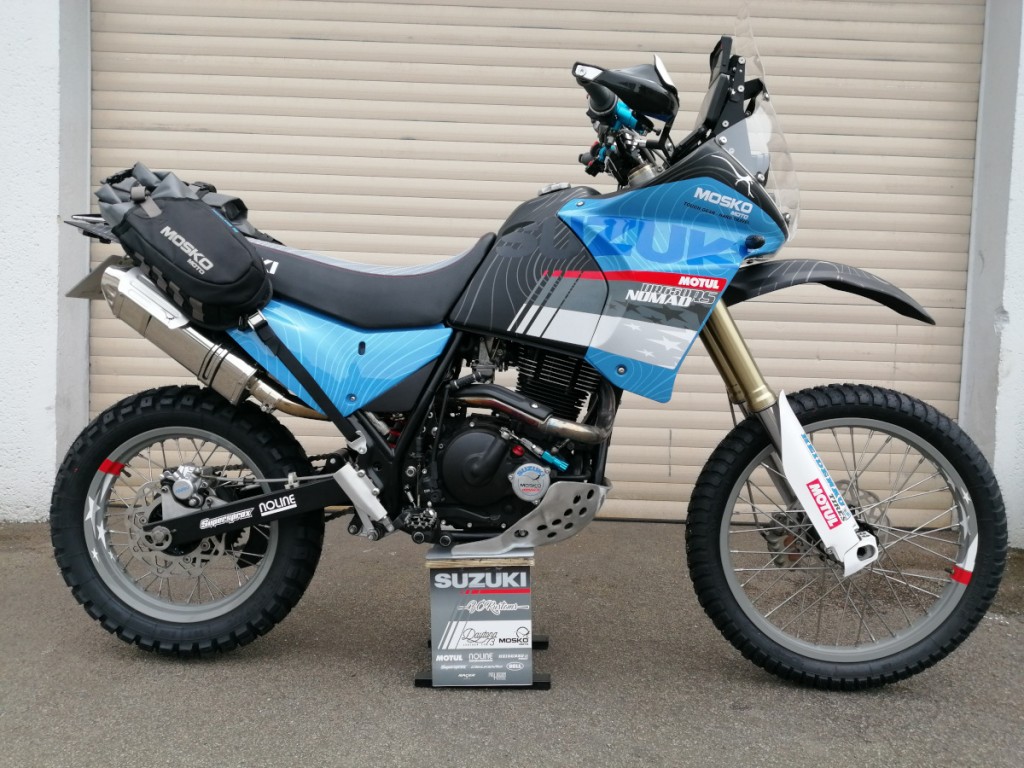 In 1990, Suzuki introduced the DR650, a big-single dual-purpose machine destined to become one of the most versatile and bulletproof do-anything bikes in modern history. The DR has the ground clearance and suspension travel for rough terrain, while the commanding riding position makes the bike a solid urban commuter. What’s more, the simplicity of the air-cooled, carbureted engine is refreshing in today’s digital world:

“There’s no fancy high-tech fuel injection or ride-by-wire system or computers to leave you stranded far from home. Simple air cooling is used, with an external oil cooler on the right side to take away engine heat. This reduces weight and eliminates the need for a water pump, thermostat, plumbing, a radiator and fan, all of which are subject to damage and failure.” —RideApart It’s a testament to the bike’s DNA that it remains available in the States, relatively unchanged 30+ years after its introduction. In Europe, however, the DR hasn’t been available for quite some time, where stringent emissions make it nearly impossible for non fuel-injected bikes to be sold. One of favorite builders on the far side of the pond is Yann Le Douche of Breizh Coast Kustoms, aka BCKustoms. Yann has quite the pedigree for a bike-builder, including stints as a race mechanic for Ducati France, a team coordinator in World Superbike, and a MotoGP journalist before he caught the flat track bug on a trip to the USA. During the initial lockdown last year, Yann built a BMW F650 rally bike that we featured:

“After building that previous BMW F650 ‘Dezert Runner’ in March 2020 — the first lockdown period — my aim to go out for long rides has become stronger.” This time, Yann decided to start with a Suzuki DR650. He says the choice was easy, as he’d worked with Suzuki during his career in the World Superbike Championship (2002-2009):

“This bike is kind of a tribute to all those engineers working so hard around the Ryuyo facilities back in the day. I still have much respect for that period…” Since the DR650 is no longer available in Europe due to those aforementioned emissions regulations, Yann wondered what a 2021 Suzuki DR rally edition would look like:

“So, as the DR is no longer sold in Europe due to pollution rules, I was wondering what a 2021 Suzuki DR would look like with all new technologies, LED, digital instruments screens, and new rally fairings.” Below, Yann takes us through the research, thought process, parts supplier communications, and hands-on labor that transformed this 30-year-old dual-sport into the BCKustoms DR650RS “Nomad” you see here. After building that previous BMW F650 “Dezert Runner” in March 2020, the first lockdown period, my aim to go out for long rides has become stronger.

Though I’m still inspired by flat track racing, I needed to have some off-road practice to improve my rookie riding skills, as I still have no oval track around to train on. The Funduro opened new possibilities to get some time in the area riding off-road and I thought a lighter version of the Bavarian bike would help me improve. This is a 1991 Suzuki DR650RS. The choice for me was easy. When it comes to custom motorcycles, you have Harley-Davidson riders and others. For sport bikes, you have Ducati lovers and others. For long off-road trails, you might go for a KTM Rally replica. But all non-KTM owners love to ride a Suzuki RMZ for enduro or DR650 for trail motorcycles. And lucky you are in America to have it on sale still… That’s what I’ve noticed on Instagram pages and blogs around. And building a Suzuki-based project makes a lot of sense for me, recalling my race career with the Hamamatsu manufacturer in the World Superbike Championship (2002-2009). This bike is kind of a tribute to all those engineers working so hard around the Ryuyo facilities back in the day. I still have much respect for that period, so yes, the choice was easy — also because the DR-RS has that high front fairing which suggests much minor modifications to turn the bike into a rally project. After the Funduro build and the comments I got on it, I wanted to go farther down the adventure path. I’ve tried to push that nineties big trail motorcycle homemade rehab concept to its limits, starting with a lighter trail bike. So here’s the new BCKustoms show bike. Not much to invent again — just checking around and learning from motorcycle history as always. Most trail riders still look at the Dakar Rally bikes as the start of it all in the early 80s. This rally’s always been a racing laboratory to develop trail motorcycles for the market, and finally those bikes were returning the year after their release to the Mauritanian and Sahara desert for racing. The Honda XLVs, Yamaha Tenere, Suzuki DRs, and others were designed in the desert. So, as the DR is no longer sold in Europe due to pollution rules, I was wondering what a 2021 Suzuki DR would look like with all new technologies, LED, digital instruments screens, and new rally fairings. I took inspiration from the latest ADV concepts and Dakar race bikes, chasing the most accurate details that would make sense for this project. 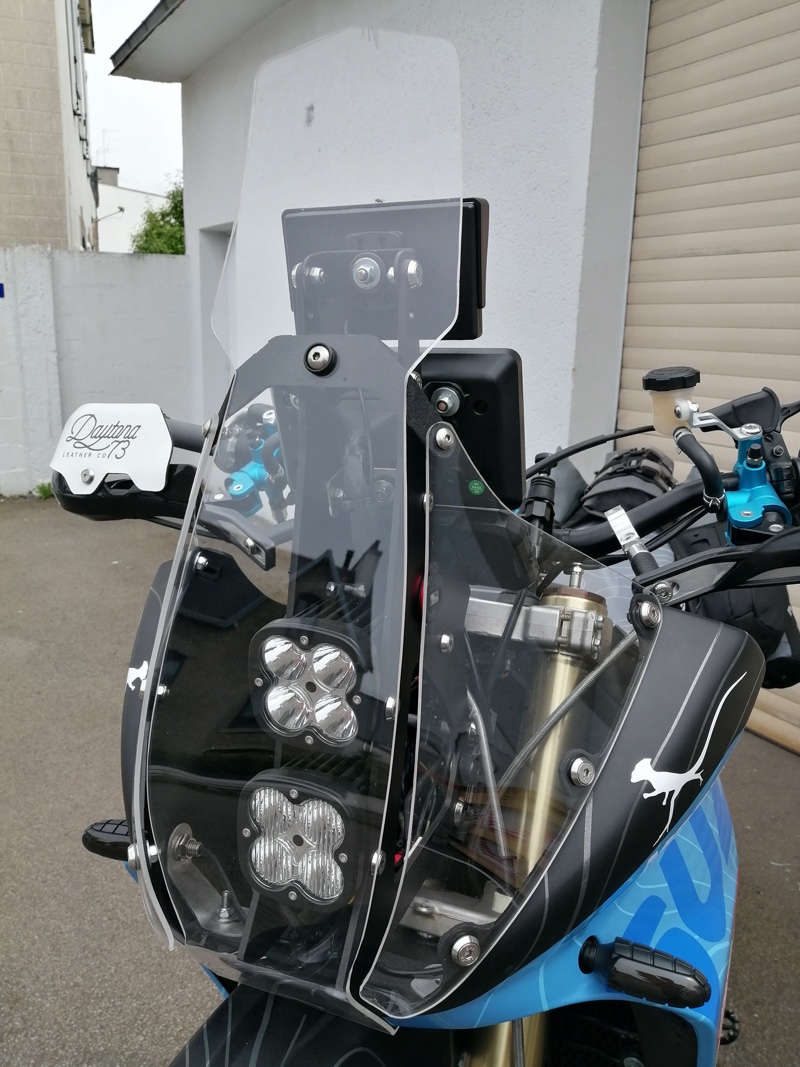 I could have tried to adapt a compete aftermarket KTM kit to the DR. But most comments on the BMW F650 I built before was that how well I modified the original fairings — it looked kind of like the original manufacturer’s design. So I decided to keep most of the OEM parts here and just create a modern looking rally windshield. This one also had to be a “display case” for a full custom dashboard and instruments set on a homemade instrument tower. As for instruments, you’ll find a full digital dashboard in the middle slot, a cell phone mount in the bottom place, and a video mirror with the camera located next to the taillight. The second big part done at the workshop was the extra rear fuel tank. The original DR exhaust, which carries two mufflers under the seat, was a big extra weight to save. After modifying the late DR-SE Delkevic stainless tri-oval exhaust, I decided to use the free space in that rear left section to try and build a (first) custom alloy tank. Of course it has! Mosko Moto shipped me some high-quality luggage to mount on my BMW Dezert Runner (not Desert but Dezert Point as for my friend skate shop which supports me also…). These are great quality products, really. Designed in the USA, tested on desert long rides for weeks before being finalized and produced, I’ve been convinced these products should be on my new build. So, as the White Salmon-based company’s website bloggers around the world are called Nomads, the nickname was found. I’ve spent a couple months designing every night to create the project. Daytime was spent at the workshop with ongoing builds. When I thought the idea was there, I searched for the donor bike. My friend Luc from la Grange Mécanique had one in his backyard. Then came the restart moment after three years left in a corner.

After that, even if the design was there, every single detail has been checked, parts chosen, limited necessary instruments functions and elements integrated like on a manufacturer homologated bike. Also, choosing parts for that build, I’ve been doing an off-workshop communication job to check if any other high-quality parts could be on the bike.

I then found a new deal with Heidenau tires who provided me with a set of K60 Scout tires and Supersprox was happy enough with that project to ship me Stealth sprockets to complete the bike. This is really appreciated for a small workshop like mine to have such support from great brands known for their quality products. Thanks to them.

I know the topographic theme has been seen since Husky released the Norden 901 concept. But I thought it would help to place the bike in a period in terms of graphics. So I provided my own interpretation of that curvy design applied on a 30 years old Suzuki DR, with the Mosko Moto blue, some Motul red stripes, and a mix of stars for my long term now loyal partner Daytona 73. And the design was complete then.