The Yamaha XT500 is one of our favorite bikes of all time. The twin-shock, four-stroke single-cylinder enduro came out in 1976, a street-legal version of the TT500 introduced a year earlier. Yamaha USA had realized there was a market for a 500cc, British-style thumper:

“BSA Gold Stars and single-cylinder Matchlesses had excellent torque and made usable power in a wide variety of offroad conditions, and by 1971, both BSA and Matchless were out of business. Further, while American enthusiasts appreciated the power and handling of the big British singles, they could get along without their weight and maintenance. Yamaha knew that any proposed 500cc single would have to be both reliable and light in weight.” —Motorcycle Classics The development team operated with a the motto of a “yen for every gram,” working hard to make the bike as light and slim as possible, utilizing an aluminum tank and oil-in-frame design — a first on a Japanese motorcycle. In 1979, French rider Cyril Neveu won the first-ever Paris-Dakar Rally on an XT500, cementing the bike’s place in history, and XT500’s took the top four places in the 1980 rally! Enter our new friend Claudio Pedraza, who’s been a motorcycle for more than three decades. He normally works for other workshops — usually official Honda shops or teams — but he also owns a small workshop in Barcelona, ZZ Moto, where he works on projects for himself and a few commissions.

“I firmly believe that the source of my inspiration lies in creating the bike that I want to ride and with the performance that I like it to have.” Recently, he came across a 1981 Yamaha XT500 basket case — though the engine had been mounted in a newly-painted frame, everything else was in a bunch of boxes, and certain parts were missing. Apparently, the previous owner had intended to customize the bike into some kind of brat build. As a former enduro racer, Claudio held the mighty XT500 in high esteem — and he quickly decided on a path forward:

“While I have a passion for modifying the looks or performance of a bike to suit a specific use, be it on or off/road, sometimes when I come across a classic of this level, I consider that my best contribution is to return it to its standard condition. Let’s not forget that the Yamaha XT500 is a mythical bike. It is the model that won the first edition of the Paris Dakar rally, no small feat. Recovering a piece of motorcycling history is a beautiful adventure.” Below, Claudio gives us the full story on bringing this old warhorse back to life, along with lots of beautiful photos from photographer Pablo Bustos (@pablobustosss). My name is Claudio Pedraza. I’ve been working as a motorcycle mechanic for more than thirty years, and although I usually work for other workshops — generally official Honda services — I also own a small workshop in Barcelona, where I enjoy myself modifying my own bikes. Of course I have some commissions every so often, but mostly the custom bikes I do are for myself. I firmly believe that the source of my inspiration lies in creating the bike that I want to ride and with the performance that I like it to have.

I work in a variety of styles from custom, to cafe racer, bobber and even chopper, but there is always an off-road motorcycle in my garage. My past as an amateur enduro rider led me to have one. I can’t avoid that. On this occasion, fate and my love and for classic bikes led me to come across this old XT500 that was for sale. Its condition was a bit worrying. It was semi-dismantled. The frame was freshly painted and the engine placed in it. The rest was in various boxes that made it impossible to define how many parts were missing. 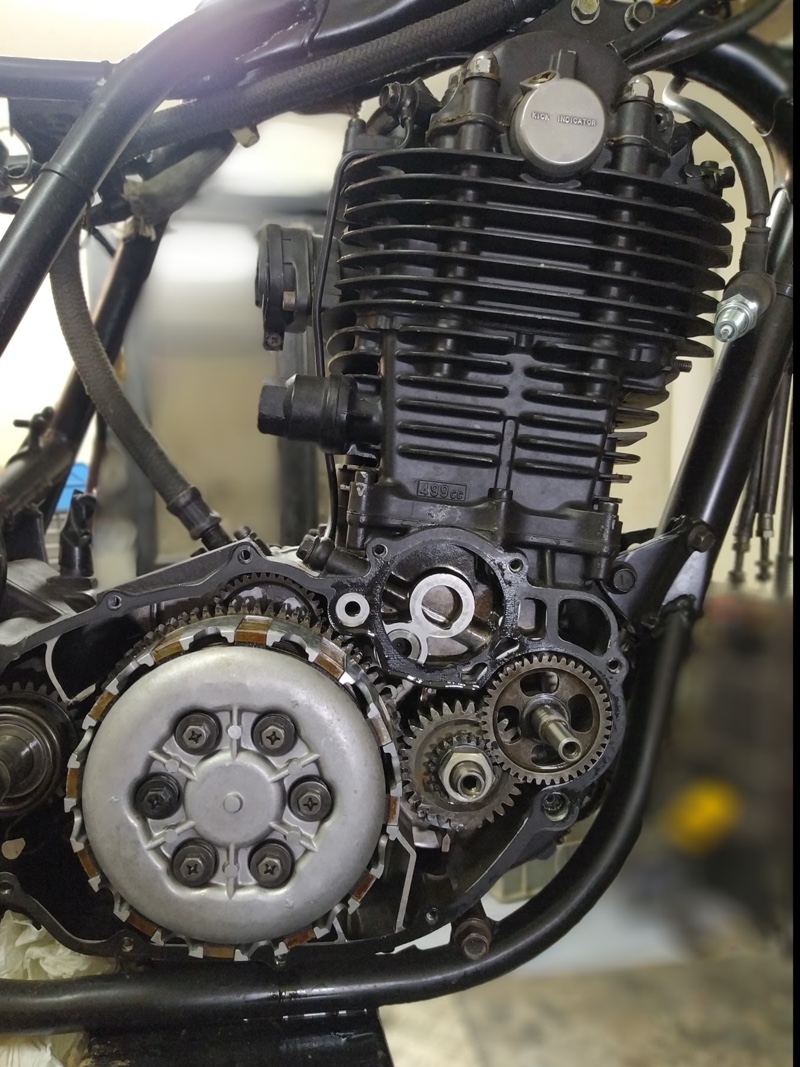 It also had some modifications that I never quite understood. It was as if the previous owner had had in mind to turn this classic into something more Bratstyle.

While I have a passion for modifying the looks or performance of a bike to suit a specific use, be it on or off/road, sometimes when I come across a classic of this level, I consider that my best contribution is to return it to its standard condition. Let’s not forget that the Yamaha XT500 is a mythical bike. It is the model that won the first edition of the Paris Dakar rally, no small feat. Recovering a piece of motorcycling history is a beautiful adventure. After this mindset and with the bike in my shop, I dived into the boxes that came with the bike and began to classify the parts. The missing parts were many and I didn’t know the state of that engine either.

I had found the key, and the first step was clear — I had to get it running to check if it could be restored. This part was carried out with a lot of passion, but with some difficult moments — it seemed to get more complicated with every step I took. It took me many hours to get the wiring back, even though I focused exclusively on the ignition. Finally I got the blessed spark on the spark plug! Now it was time to pick up the carburettor from another box, to check it and clean every passage. Here it was all good news. Despite its forty years of age, it did not show any marks of mistreatment beyond some small wear and tear. This gave me hope that the engine was in the same condition. I checked the intake nozzle and fitted the carburettor clean and tight. I gave it new oil and filter, making sure to add part of the oil through the valve covers to lubricate the upper part of the engine.

Also with a syringe, I injected oil into the oil pump inlet through the hose that connects the engine to the chassis and removed the small bleeder screw that was located above the oil filter housing. Without the spark plug in place, and while turning the engine by hand, I inject oil until no more air came out of the screw I removed at the top of the oil filter housing. This small detail assured me that the engine would not start without oil pressure after such a long time asleep. Also, I adjusted the valves. I put in a new spark plug and also a small air filter as the complete filter box was one of the missing parts. The previous owner in his modification project had discarded it. Now yes, petrol and start her up! I thought so, but no, the decompressor didn’t work and it was almost impossible to lower the starter lever. Disappointment again, but a few moments later, I reacted and realised that, far from being bad news, this indicated that the engine’s compression was optimal. This was promising. Repairing the decompressor was not very complicated; it was just badly mounted. Someone had added an extra washer to the screw that prevented it from moving. I solved it and went back to the ritual of starting it up.

Several kick strokes, find the spot, operate the decompressor, and on the third attempt that engine roared again. It was really a moment of glory! I just had to adjust the idle speed a bit and that was it. Everything was fine. Everything was music in my garage. With the mechanical part solved, the rest of the work, although not fast, was much more relaxed. Knowing the engine is working well gives you an important peace of mind. Now it was time to paint the exhaust and some parts that has been polished, and above all to look for the missing material. Those missing parts were my second concern, but through the internet it wasn’t difficult to get them. After about a month I had everything assembled. The bike was finished! I think the best moment was in the course of taking the XT out on the street and starting it up there, an epic moment.
Then riding through the streets of Barcelona up on the Queen of the Paris Dakar confirmed that everything went well in this adventure. It is difficult for me to express the good luck that I have had with this restoration and even more so the joy that it has given me to have recovered this classic.

Leave a Reply to nevybanks Cancel