The Yamaha HL500 — aka the “Aberg Yamaha” — is one of the most fascinating motocross bikes of the 1970s. In 1975, Yamaha introduced the TT500 — a twin-shock, four-stroke single-cylinder enduro built in the tradition of the British 500 singles — and the street-legal XT500 appeared a year later. While the Yamaha 500 singles would win the first two runnings of the legendary Paris-Dakar Rally, they were big trail bikes, not motocrossers, weighing more than 300 pounds in factory trim. However, they caught the attention of two Swedish motocross legends, Torsten Hallman (four-time World Motocross champion) and Sten Lundin (two-time World Motocross champion), who were working for Yamaha of Sweden. While the two-stroke had already displaced the old British four-stroke singles as the dominant force in motocross, the Swedish duo wanted to try transforming an XT500 into a race bike. When they asked for a donor XT, Yamaha turned them down, telling them the bike was aimed only at the American market.

“Hallman ended up having to buy a used XT500 off an American rider who had entered one in the 1975 Six Days Trials in England. Armed with their new toy, Hallman and Lundin set about turning the mild mannered XT into a fire breathing racer.” —Pulp MX

They tuned the 30-hp four-stroke single to make 50+ horsepower, modified a Husqvarna frame to accept the big Yamaha powerplant, and outfitted the bike with a custom aluminum swingarm, Fox Air shocks, and a SimonS fork up front. The Hallman-Lundin HL500 was born. 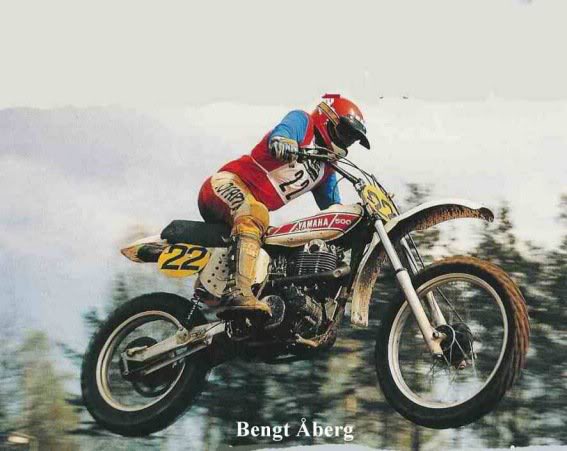 A company called ProFab was contracted to reproduce the chassis, and two-time World Motocross champ Bengt Aberg campaigned the all-new machine in the 1977 500 GP’s, winning at Luxembourg and finishing ninth in the overall championship — the first points scored for a four-stroke in an MX GP in a decade!

To capitalize on all the press, Yamaha produced a limited edition run of factory HL500 replicas in 1978 and ’79.

“The production bike was much heavier and slower than the Factory racer had been, coming in at close to 260lbs and pumping out around 30hp. For ’79 a further run of 200 HL500 were made…. The ’79 is by far the better bike with a modified “drop” swingarm which offers more suspension travel and several motor upgrades to increase power. Either of these bikes is extremely rare today as the complete run only totaled 400 machines. ” —Pulp MX Over the years, however, intrepid builders and fabricators like Paul Meginley of Australia’s Se7en Six Collective have been building HL500 replicas — many of which outperform Yamaha’s production HL500 replicas. Paul’s love of the Yamaha big singles was struck early and deep:

“I first rode Dad’s TT500C (which I still have to this day) when I was 12 — the torque was addictive and I’ve been into these old Yammie thumpers ever since.” Paul, who runs his own car detailing business on Queensland’s Gold Coast, had been helping his good friend Adrian compile parts for an epic HL500 for several years. When the 2020 pandemic struck, it was the perfect opportunity for Paul to help his friend finish off the build. 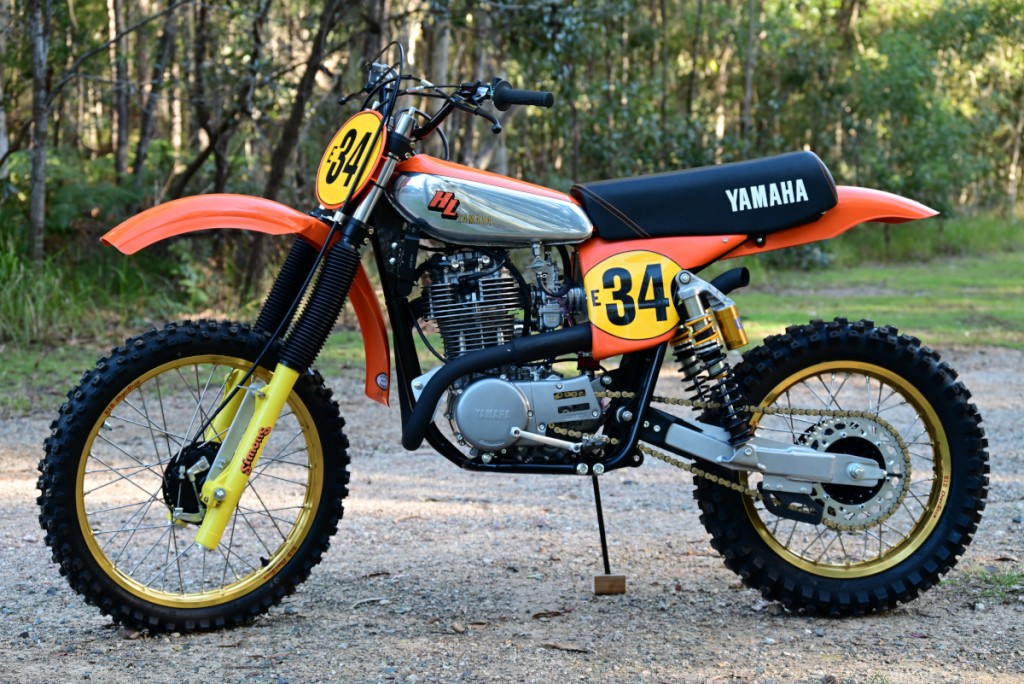 “The whole thing is custom. Not many parts were bolt-on…. Almost every component is tweaked, altered, and/or finessed in some way.” Then there’s the engine, and what a beast it is:

“Adrian’s brief on this was clear: it had to be different. Not something run-of-the-mill…. I suggested, ‘Let’s build a torque monster! — something with loads of grunt — to plough furrows like a tractor!’ Adrian agreed.” 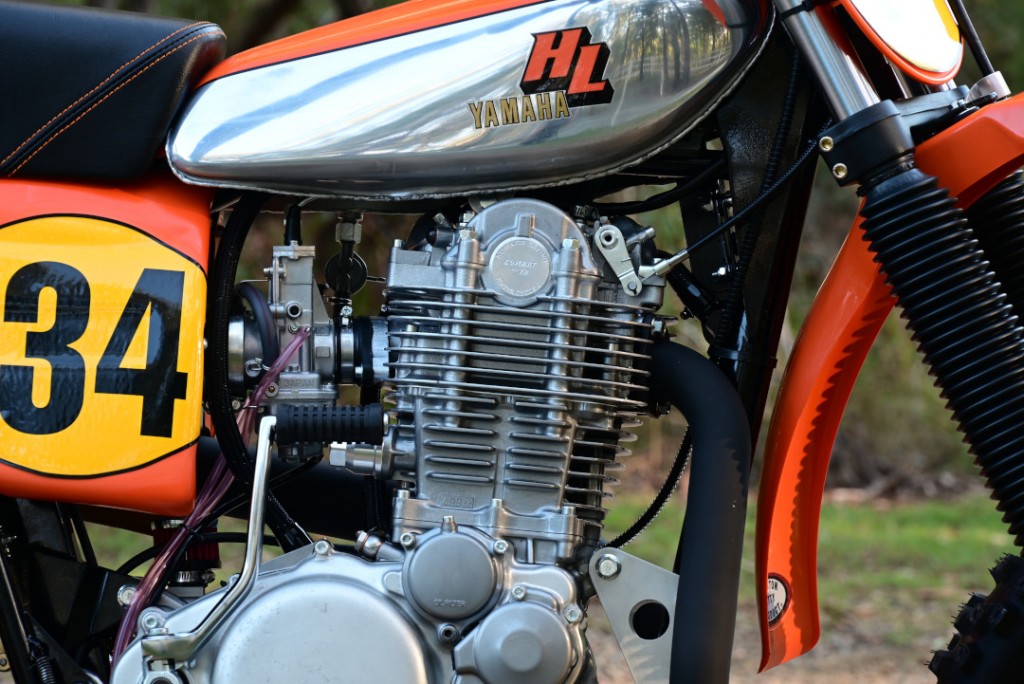 “The Yoshi cam is profiled for mid-range and it, combined with the extra 100cc of capacity, helps this motor effortlessly lift the front in 3rd while ploughing 3-inch furrows at the rear.

Below, we get the full story on “Bruce” the HL500 rep directly from Paul himself.

I’m 45 and run my own car detailing business on the Gold Coast, Queensland, Australia. I grew up in country NSW and rode dirt bikes since I was about 10 years old. My dad had a white and red TT500, which he used to follow me around the paddocks and river bends where I grew up. I had two younger brothers who got into motocross racing but I was grown up and had left home by the time racing became part of my family’s pastime. I first rode Dad’s TT500C (which I still have to this day) when I was 12 — the torque was addictive and I’ve been into these old Yammie thumpers ever since.

I had restored a few two-stroke motocrossers before I got into the HL replicas — what drew me to them was the combination of the improved suspension and ergonomics over a stock TT500, and the sweet torque of the best bit about the old thumpers: that engine!

I think I have an eye for detail and I try to see things through to completion, no matter the size of the task. This HL rep is built using a AllyFab (Queensland, Australia) chassis kit which was produced in 2018, but I guess the bikes we are replicating are from the post-Aberg era of HL Replica production from around 1978-9ish.

I personally believe these bikes fit right into the Evolution Class of Vintage Motocross racing — here in Australia the rules are roughly this: the bike and its components must be Air-cooled, Drum Braked, and Twinshocked (although this rule actually states that the rear suspension must be NON LINKAGE, thereby allowing Yamaha’s non-linkage Monoshock system). It IS possible to closely replicate the bike Bengt Aberg campaigned in the 1977 World MX GP season but, mostly, HL reps are a bike from a slightly later era. The key components which give it its identity, that recognisable stance, are the YZ125C (or YZ100C, YZ175C, and YZ125X) gas tank and seat, and the twin piggyback shocks. Tough.

We try to use as many period pieces of equipment as safely possible. I had helped a good friend of mine from Victoria, Adrian, source a heap of the parts required for an HL build during 2017-19. When Covid restrictions and lockdowns occurred in 2020, I had a conversation with him which went along the lines of “I haven’t got much work on right now, why don’t you send me the chassis kit and all the parts you have already, and I’ll finish off the build for you.” Adrian agreed and the parts arrived at my shed in Queensland around June. Adrian’s idea was to do a HL in his favourite TT500 colour scheme — El Toro orange from the 1979 F. I helped him source a set of vintage Öhlins shocks and a set of SimonS forks, so we knew what the basic design of the bike was going to look like. I then did a mock-up in Photoshop to solidify a few of the details, and then we began to discuss the engine.

Adrian’s brief on this was clear: it had to be different. Not something run-of-the-mill…. I suggested, “Let’s build a torque monster! — something with loads of grunt — to plough furrows like a tractor!” Adrian agreed. The whole thing is custom. Not many parts were bolt-on…. Almost every component is tweaked, altered, and/or finessed in some way. Can you spot the remote oil cooler and its braided oil lines, the bespoke alloy parts like front fender adapter, oil cooler bracket, front brake cable guide, and rear splash guard…? None of these parts are off-the-shelf. Even the Preston Petty fenders were altered to fit our application. The tank is custom-painted. The seat cover is custom-trimmed. The controls and cables are aftermarket parts available from any dirt bike store, as are the tyres, but that is about it for retail parts…. Every nut, bolt and fastener including engine hardware and things like axles and chain adjusters were electroplated for uniformity. Often, when I do happen to use a stock OEM part, it arrives in a colour like black oxide or yellow zinc — I like everything to appear “factory.” Also, IF a hardware store bolt is used (rarely, as I hate doing it), I file and sand the tops so as to remove the markings prior to plating. 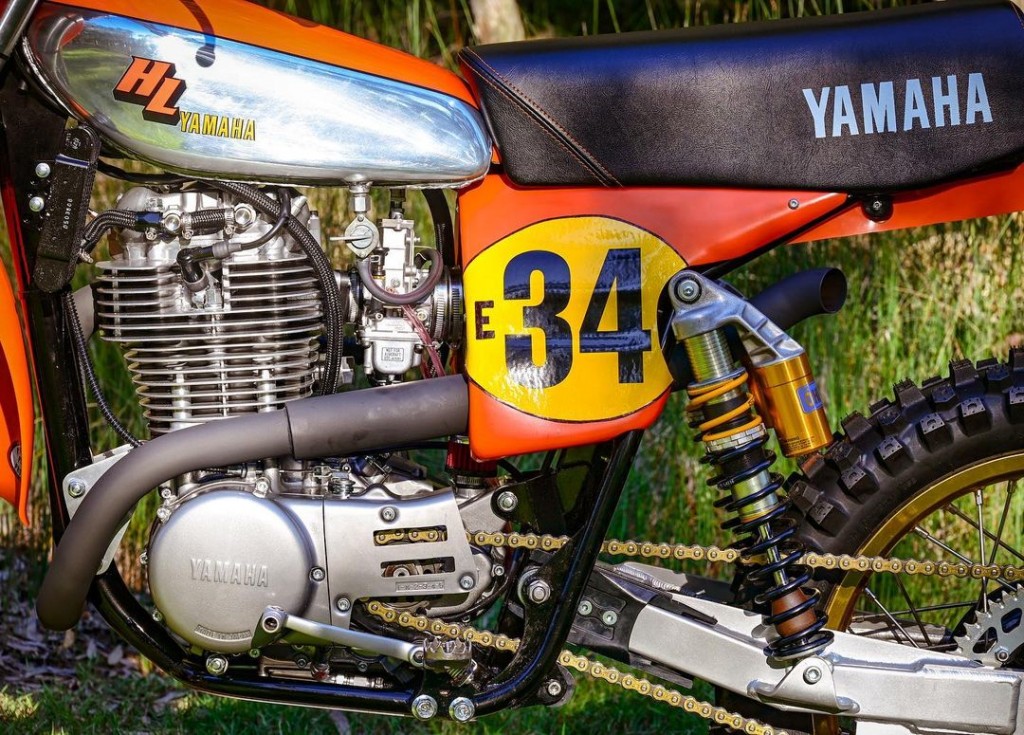 “Bruce.” Bruce is a pretty tough and rough name right? It’s a name that conjures up images of someone with big balls and a lumberjack appearance. Think Bruce Willis, Bruce Lee perhaps? What about Bruce Wayne — I mean can you get any tougher than Batman?! The engine work. The Carrillo 600cc big bore kit is a beautiful work of art, combined with the Yoshimura cam. I had these pieces of automotive jewellery on the bench — I was almost reluctant to hide them inside the motor — almost! It was not a simple process to get them fitted, but perseverance on the part of my engineering supplier had it done.

The headwork: ported & polished, lightened rockers, swivel tappets, Ti retainers, RD valve springs (middle spring omitted, 1mm spacer inserted to give specified tension at full lift), nitrided valve tips, MegaCycle vernier cam gear — sounds like performance mods right? Well, yes of course we wanted the motor to breathe well, and that HL shorty pipe and Mikuni carb ensures it sucks and blows sufficiently — but ultimately the head work was done to ensure the engine has an easy life. The Yoshi cam is profiled for mid-range and it, combined with the extra 100cc of capacity, helps this motor effortlessly lift the front in 3rd while ploughing 3inch furrows at the rear.

Help with the build credits to the following: