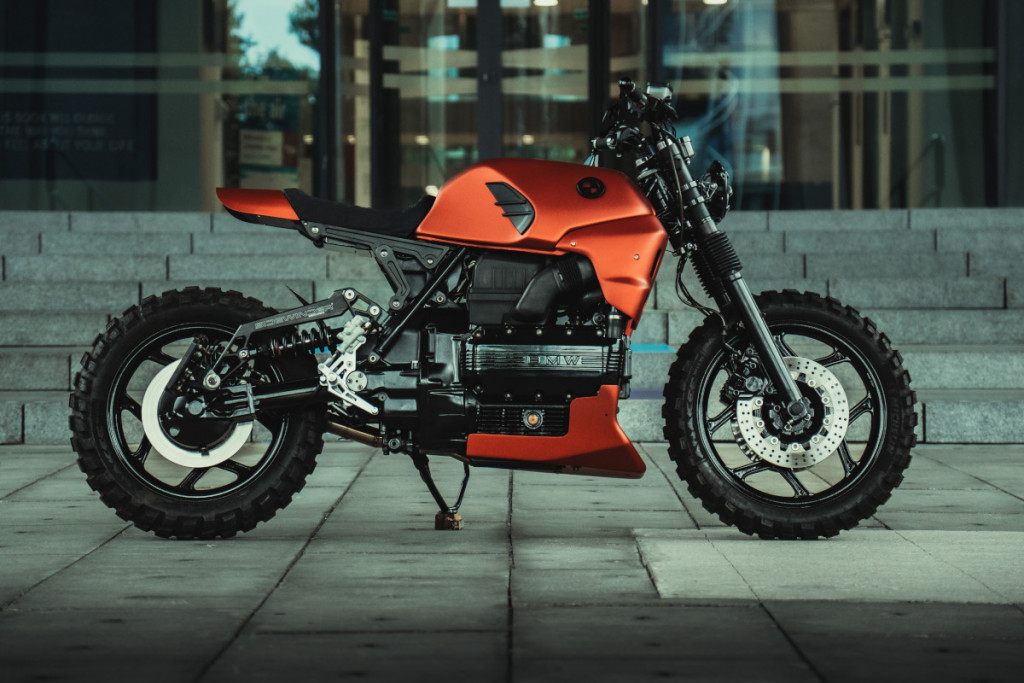 Affectionately known as the “Flying Brick,” the four-cylinder BMW K100 was an evolutionary leap forward for BMW Motorrad, who’d been focused on their flat-twin boxer machines since the post-WWII era. The company decided that it needed a more modern machine to compete with the Japanese and European marques. The result was the K100, a 987cc sports tourer that took a good deal of technological inspiration from the automotive side of the company. The longitudinal four-cylinder, liquid-cooled engine was laid on its side in the chassis, and fueling came via a Bosch LE Jetronic system similar to what was being used on the BMW cars of the time.

“There were benefits in the new design; the engine and transmission were kept accessible and serviceable, the engine was made durable and indeed would ensure these bikes developed a reputation for being able to achieve high mileages…. Add to the mix BMW’s legendary quality control and attention to detail, and their experience in working with liquid cooled and fuel injected engines, and you have a formula for a very special bike.” —Silodrome Today, more and more custom builders have been turning their attention to these once-forgotten “Flying Bricks.” They are powerful (90 bhp), reliable (100,000+ miles isn’t uncommon), built like tanks, and quite beautiful when stripped of their large touring fairings — many of which have been torn up over the years anyway. This build is from our friend Maarten Bressers of Moto Rebuild, who’s been building custom bikes with this father since 2016. Based out of Eindhoven, the fifth-largest city in the Netherlands, they build bikes as a hobby, just for themselves. Their previous build — the BMW R80 “Woodmachine” — displayed a high level of fabrication and detail. Nicknamed “Marija,” this K100 is a sportier, burlier build, outfitted with custom fairings like we haven’t seen before on a K bike, as well as an array of one-off and aftermarket parts and a beautiful matte paint scheme. Maarten is particularly happy with the custom bodywork and the rear mono-shock conversion. Below, we talk to Maarten for the full details on the build, and he took the photographs as well. You can follow his photography account at @maabre. After I was convinced that I would go for a K100, I saw on Instagram a guy from Canada (his instagram is @johnverds) — a red K100 with a lot of body in the front. Then I realized you could make the K100 so rugged. I call her “Marija.”  I treat her with as much love as I treat my own wife. A hell of a beast. I feel so confidence on it! Compared to the other bikes I’ve made, this one has a sportier look. What I really like even more is the robust front with that fairing set, and the suspension with those shock absorbers, which makes the whole wheel free.