“I wanted to build a naked bike that looked like it came from the Yamaha factory.”

The Yamaha YZF-R1, known simply as the R1, has remained one of the world’s fiercest factory superbikes since its introduction in 1998. The 2004 R1 was the first production motorcycle to claim a 1:1 power-to-weight ratio — 180 horsepower, 172 kg dry weight — and it showed. Motorcycle Consumer News clocked the new R1 running through the quarter-mile traps in 9.9 seconds at 145 mph, and the bike howled to a top speed of 179 mph. What’s more, Yamaha tilted the cylinders 40° forward, creating a straight frame line from the headstock to the swingarm pivot point, which increased rigidity a reported 200%. The result was an absolute weapon on the street, strip, and track:

“It’s hard to fault the clinical, precise and devastatingly fast 2004 Yamaha R1. Its chassis can cope with all kinds of road surfaces and demolishes tight hairpins at any track.” —MCN Recently we heard from our friend Bald Anthony, builder of the Yamaha RZ350 restomod we featured earlier this year. Anthony had a clear vision for this 2004 R1:

“I wanted to build a naked bike that looked like it came from the Yamaha factory.” 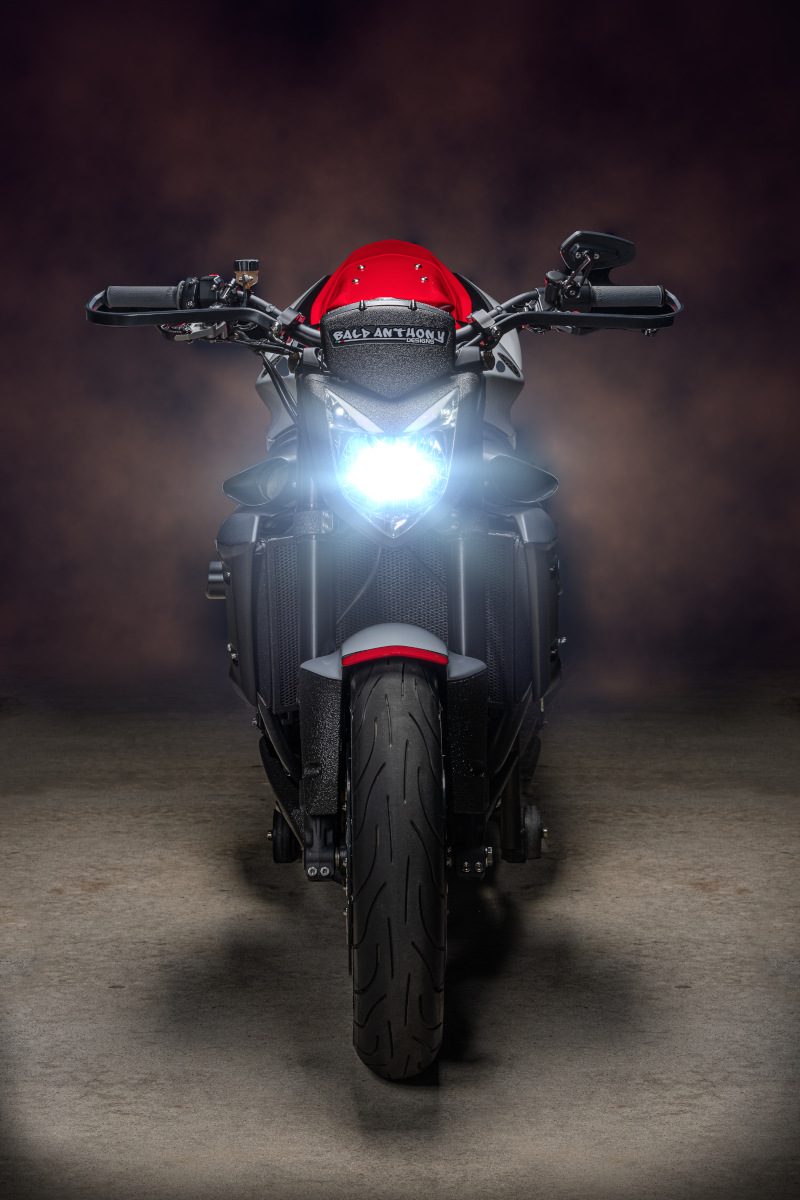 He braced the swingarm and added CNC rear-stand mounts, while a custom top triple clamp allowed him to install a set of motocross-style handlebars — wheelie machine! Anthony says he cut some 75% of the weight of the stock exhaust by switching to a low-mounted 4:1 setup. “Many people think it’s the next naked bike coming from Yamaha.” And with so much weight removed and the new upright riding position, the bike is an absolute monster to ride:

“It feels like a dirt bike with a handful of power. With the handlebars installed, the fairings and additional weight removed, this bike is very light so it can be thrown into the turns.”

Below, Anthony give us the full details on “The Naked R1.” I’ve owned many bikes and I’ve enjoyed customizing each one. As the years have gone by I’ve always wanted to build a bike that the factory should have built and this R1 is it! From the positive comments the bike receives to the feeling I get when I ride this bike, the satisfaction is immeasurable. I also build bikes for clients that need this type of detailed work. My garage has grown into my workshop and customizing bikes to the smallest details is my passion. I’m proud of the factory look of this bike and all the details that were incorporated into the build. Many people think it’s the next naked bike coming from Yamaha.

The bike started out completely stock new out of the crate. The swingarm was braced and CNC rear-stand mounts were added. The custom top triple clamp was installed to incorporate the dirt bike type handlebars. I used a shrink tube product to install the two bottom radiator hoses instead of the basic metal hose clamps.

The dual exhaust was dropped from the top to a single at the bottom saving 75% of the weight. The exhaust can was coated black to conceal the carbon fiber with a single bolt attachment for a quick removal. The bar protectors were installed to protect the two-finger levers and my hands in case a car mirror was taken off when I split traffic. They work well. The handmade ABS plastic rear tail cowl was created with no pad. The rear key cylinder was removed and a lever was installed under the tail section to handle the duty. The headlight, speedometer and the custom front aluminum cover were installed to clean up the front end. The air ducts were shortened and reshaped for a smoother look. The front fender was cut back a half inch then extended four inches on the other side. I shaped the delrin frame sliders after my skateboard wheels. All stock and custom parts were hand-sanded smooth to remove all casting marks.

It feels like a dirt bike with a handful of power. With the handlebars installed, the fairings and additional weight removed, this bike is very light so it can be thrown into the turns. I wanted to build a naked bike that looked like it came from the Yamaha factory.