Introduced in 1986, the Kawasaki EX250 Ninja — also known as the Ninja 250R — would become one of the world’s most popular 250cc machines. The quarter-liter Ninja sold well to entry-level sport riders, and soon became a popular choice for track day enthusiasts:

“Uncounted thousands of riders got started on these bikes. This is a used motorcycle that might be considered by riders ranging from a vet building a track-day rig to a first-season rider coming off a Z125 Pro.” –Revzilla The 250R has only gone through three major redesigns over its 35+ years in production — a testament to the bike’s sound recipe and enduring character. 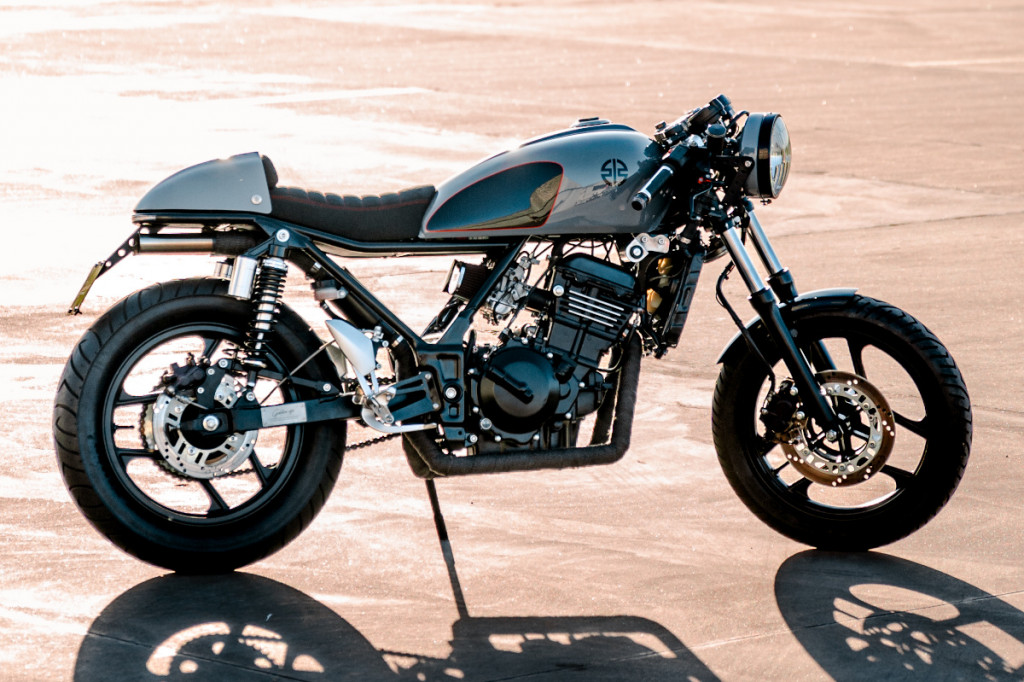 Recently, we heard from Matias Barrozo, founder of Golden Age Motor Co. in Buenos Aires, Argentina. Matias has experience with both vintage motorcycles and high-end cars:

“After working in two different motorcycle workshops, the opportunity came to work in a workshop that restores classic sport cars such as Ferrari, Porsche, Maserati, Aston Martin, and much more. Now with that knowledge, I decided to go further — I didn’t want to restore a motorcycle, I wanted to build it. So I opened my own workshop…” The bike you see here is the first project from his new shop, a 1991 Kawasaki Ninja 250 café racer. Matias gives us the full details on the build below, but highlights include a new subframe and handmade alcantara saddle, dual rear shocks, ’81 CB750 tank modified to fit the frame and hide the battery underneath, handmade exhaust, slipper clutch from a newer Ninja 250R, and much more.

“We call this Ninja ‘DONNA,’ because when I bought it was green as a Ninja turtle (DONAtello). After the custom build, it became a sexy lady, so the name changed to DONNA (Woman in Italian).” Below, Matias gives us the full story on the build, and thanks goes out to Pablo Labrador for the photos and Sundown Jet for the setting! My name is Matias Barrozo, I’m 33 and I’m from Buenos Aires, Argentina. Since I can remember, I’ve loved everything that has an engine and brings you speed. About 7 years ago I started my workshop life. After working in two different motorcycle workshops, the opportunity came to work in a workshop that restores classic sport cars such as Ferrari, Porsche, Maserati, Aston Martin, and much more. Now with that knowledge, I decided to go further — I didn’t want to restore a motorcycle, I wanted to build it. So I opened my own workshop, Golden Age Motor Co., where I will build my kind of art to sell. When we talk about our golden years, we are talking about that time of your life when you are plenty, happy, where time stops…it doesn’t matter if you are in your twenties or in you sixties, that time you spend with your vehicle, that’s your golden age for everyone who loves motorcycles and cars as much as I do. That’s the reason for the name of the brand. The project #01 is a 1991 Kawasaki Ninja EX250 turned into a Cafe Racer design. The first idea was that the bike should look like a retro bike, but modern at the same time, so we built a new subframe, we replaced the monoshock with double rear shocks. We kept the swingarm, wheels, and front end of the original bike. We adapted the headlight from an IZH russian bike. Then we replaced the old handlebar with new CNC aluminium fork handlebars. The gas tank is from a Honda 1981 CB750 Custom on the outside, but we had to modify the inside so it can fit on the frame and also in order to hide the battery under it. The seat is all handmade and upholstered with Alcantara leather. We also made the seat cowl, and it’s removable so you can take someone with you. As we don’t have the monoshock any longer, it allowed us to place the handmade exhaust there. We also adapted the footpegs from a 2007 BMW K1200R. The complete wiring system is new and tailor-made for the motorcycle. And for the last, the engine is totally restored with a little modification — we adapted the complete clutch from the 2014 Ninja 250R, which makes the bike so smooth. It also has all stainless steel screws. We call this Ninja “DONNA,” because when I bought it was green as a Ninja turtle (DONAtello). After the custom build, it became a sexy lady, so the name changed to DONNA (Woman in Italian).

The result? A unique and fun to ride Cafe Racer for the city that can be used everyday.

I tried to be in every detail of the build in order to create a unique motorcycle with quality standards, and we did it! People in the street stop to look at the bike, and after that they ask me if it’s an original bike from a known brand, or if it’s a custom built one. Making people doubt about that because of the details makes me feel so good because it means we are doing things right. You can find us on Instagram as @goldenagemotorco to see the upcoming projects. The brand has its own photographer, a good friend of mine @pablolabrador — thanks to him for these amazing pictures! I also want to thank @sundown_jet for the picture spot. To finish I want to thank you for the opportunity to show the world my art — I hope you like it as much as we do.