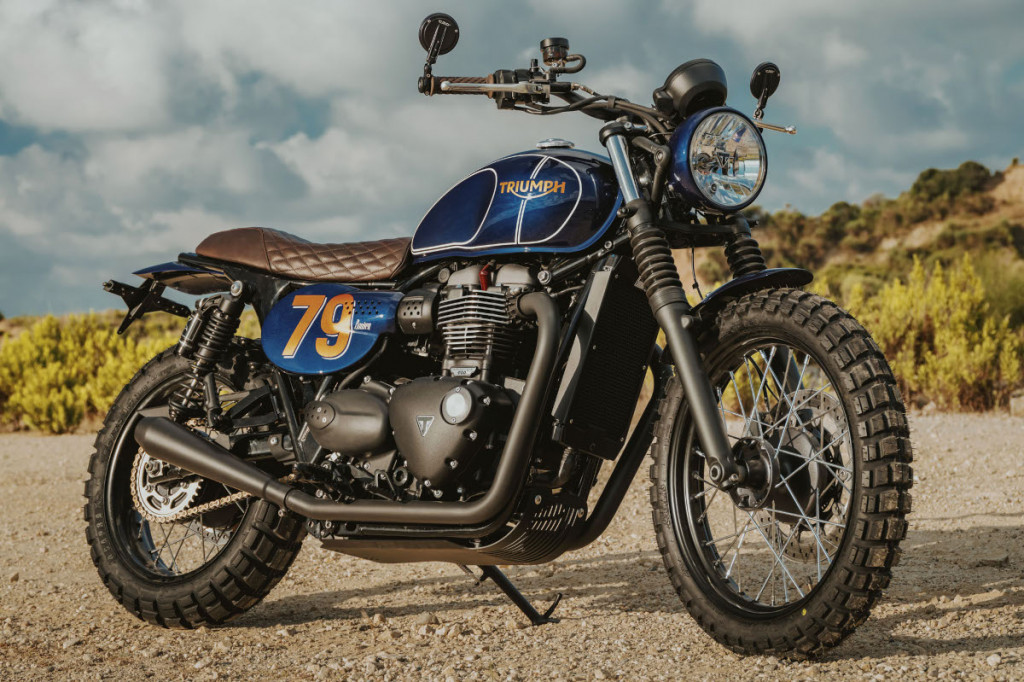 Launched in 2017, the Triumph Street Scrambler — also known as the Scrambler 900 — features the company’s 900cc “High Torque” parallel-twin, which cranks out 64 bhp and 59 ft-lbs of torque. As the name implies, the Street Scrambler is more of an urban raider and backroad adventurer than hardcore off-roader, but it’s a hoot in the city or countryside:

“Nimble, manouverable and quick enough. This really is an urban or rural fun bike in the best tradition of Triumph and other British marques.” –MCN Recently, we heard from Mert of Istanbul’s Bunker Custom Cycles — builders of the highly popular “Bunker Kong” Honda Monkey we featured in 2021. Now his crew is back with a Triumph Street Scrambler duo built for a pair of long-time friends, Pekin and Mert — veteran riders looking for a pair of complementary customs:

“Pekin was looking for a second bike to level up from his current Vespa to be able to ride longer distances with greater off-road capabilities. On the other hand Mert was riding a Tiger and was looking for a more city and commute-friendly ride.” The Triumph Street Scrambler was decided upon as the donor, which would have the style, utility, and ride they wanted, while allowing the Bunker Custom crew to develop some plug-n-play parts. The suspension was upgraded at both ends, and custom exhausts were developed that wouldn’t burn the riders’ legs during extended urban commutes in the capital city of Ankara. The Bunker team outfitted both bikes with their in-house built skidplates and radiator guards, and developed four new parts for the Street Scrambler, including front / rear fenders and right / left number panels:

“All of these parts were the result of months of physical modeling, fine tuning, and reverse engineering, which led us to use the means of 3D printing to achieve the final products.” These fraternal twin Scramblers have slight variations in paint, saddle design, and accessories tailored to each owner’s taste, but they make a particularly striking duo that’s sure to bring smiles and adventures to Pekin and Mert for years to come. Below, Mert of Bunker Custom Cycles gives us the full story on the builds, and we present more photos courtesy of photographer Mustafa Arikan (@rovingmementos).

This fraternal twin project came out of the capital of Turkey, Ankara. Pekin and Mert say that they were really close friends since their early childhood through university and still to this day. Now 44 and 43 years of age, they wanted us to build two bikes with similar approaches. At the beginning we were looking for a donor bike designed for city rides.

Both were experienced riders, but Pekin was looking for a second bike to level up from his current Vespa to be able to ride longer distances with greater off-road capabilities. On the other hand Mert was riding a Tiger and was looking for a more city and commute-friendly ride. Their intentions were pointing toward a Triumph Street Twin. After considering how they were going to ride, the Street Scrambler was a better decision because of the torque delivery at lower rpms, higher ground clearance, and 19/17″ spoke rims compared to a Street Cup or Twin — the Scrambler just made sense. We were also happy with this decision because we’d been eager to build a smart project out of a Street Scrambler for quite some time. We turned this into an opportunity to create a better look for the Street Scrambler and come up with new plug-and-play pieces for Triumphs. We developed rear and front mudguards and racing number side panels. But first some other smart mods were in order. We started with a popular Fox rear shock upgrade, which brought the rear end 2cm higher. As for the front suspension, we swapped the linear springs with progressive ones and emulators on the inside. The only engine-related mod left was the Scrambler’s stock exhaust manifolds, which went under the right leg. We had to get rid of the leg burning problem because both would be riding their bikes also on city commutes. We neatly tucked the exhaust under the bikes in a more conventional Triumph-looking way and connected them to Cone Engineering silencers and got rid of the CAT. Exhausts were then coated with Cerakote high-temp coating. As with all of our Triumph builds, we used our skid plate and radiator guard as usual. Although these close friends were looking for something similar in form and use, they diverged when it came to style choices and colors. Overall, we were tidying every line, cleaning up the design, and making the bike lose weight in a sense. Although getting the chunky lines out of the way was a must, the clients went separate ways when it came to the seat. For 79 we went with a more conventional seat with clean lines. For 78, Mert already liked the idea of a two-piece seat, which the second could be removed and turned into a rack. But the volume and lines were still a bit off, so we inherited the stock Scrambler design approach but trimmed it, made it skinnier, and shortened it approxmiately 6cm from the back. They also went for different colors. Other than the seats, they totally trusted in our sense of form and let us make the final decisions on four pieces of the rear and front mudguard, left and right side panels. They knew that we were eager to design products for the Scrambler so we got the opportunity. These four products can be found in our online shop. As I mentioned before, our main purpose with these parts was creating a cleaner and more proportionate look using the bike’s current mounting points, preserving the functionality, and without any frame modifications. As an end result, we created accessories consisting of these four pieces: front and rear mudguards, left and right number plates. All of these parts were results of months of physical modeling, fine tuning, and reverse engineering, which led us to use the means of 3D printing to achieve the final products. Our final parts are made using an SLS 3D printing machine made out of PA12 granules laser sintered and printed on order. The rear mudguard comes with its steel weight-bearing structure, license plate mount adaptable for different sizes and signals, and also a Highsider brand brakelight, which is buried neatly in the mudguard. For these builds we used two pairs of Kellerman signals, which we like a lot. But the mounting points are compatible with most aftermarket signals on the market. And for the number plate side panels, the customer can order them with their own custom racing numbers or they can buy them unpainted and customize with their own taste and color.