How many of you remember the Honda FatCat? In the mid-1980s, three-wheelers were all the rage, including Honda’s red-hot ATC “All Terrain Cycle” range. For 1986, Big Red introduced the TR200 FatCat — essentially a motorcycle version of the popular ATC200X, featuring the same 200cc four-stroke SOHC single-cylinder engine with two wheels instead of three. The result was similar to Yamaha’s BW “Big Wheel” line, with 11-inch ATV-style wheels and tires:

“The suspension was padded out by the big, pillowy off-road tires from the ATC line, and it was apparently a boss in sand and mud.” –RideApart Only available in 1986-87, FatCats are rare beasts these days.  However, if you’re hankering for some big wheel fun, the good folks at BVC Trikes have developed Big Wheel kits for a large range of modern dirt bikes (as well as Trike kits!). Recently, the CRF110 kit caught the eye of Brian Ballard at New York’s A&J Cycles, who thought it would make the perfect pit bike for the flat track races — and for his son to ride. Says Brian:

“Saw BVC Trikes post that they were developing the kit and had to have one.” 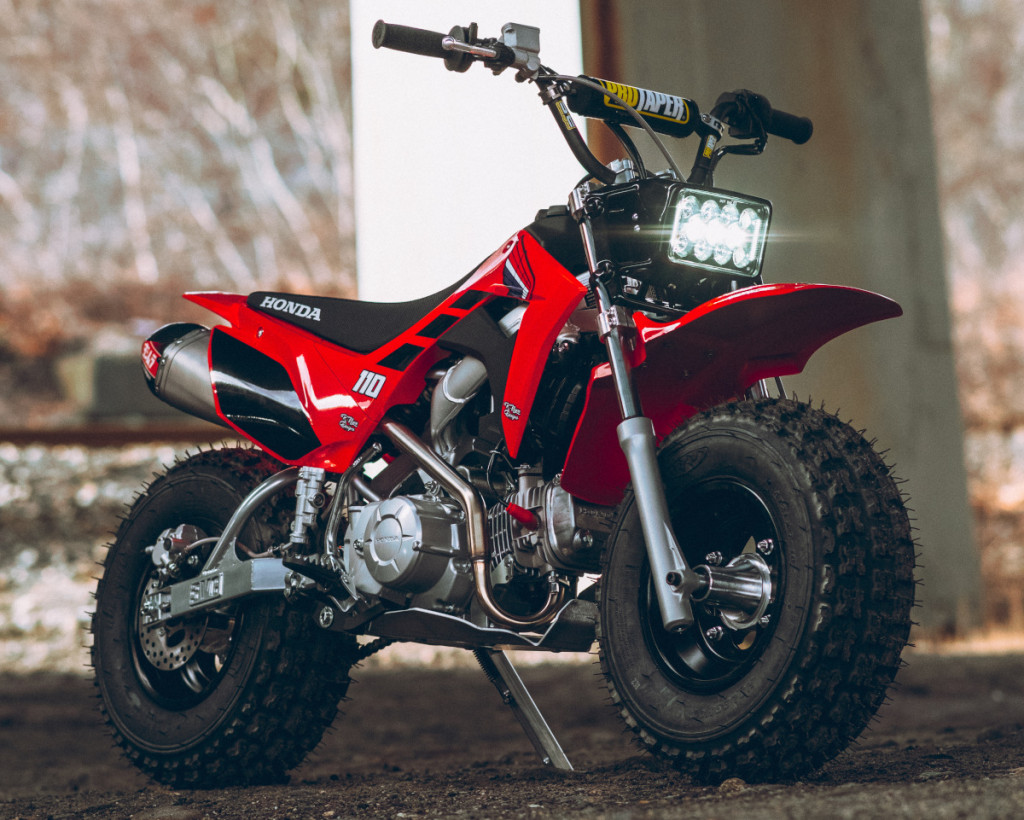 The kit included a new swingarm, triple trees, wheels, disc brake conversion, and an offset sprocket. Of course, this is A&J Cycles we’re talking about — builders of some of country’s sweetest modern Triumph customs and flat trackers — so they weren’t satisfied with just the kit. 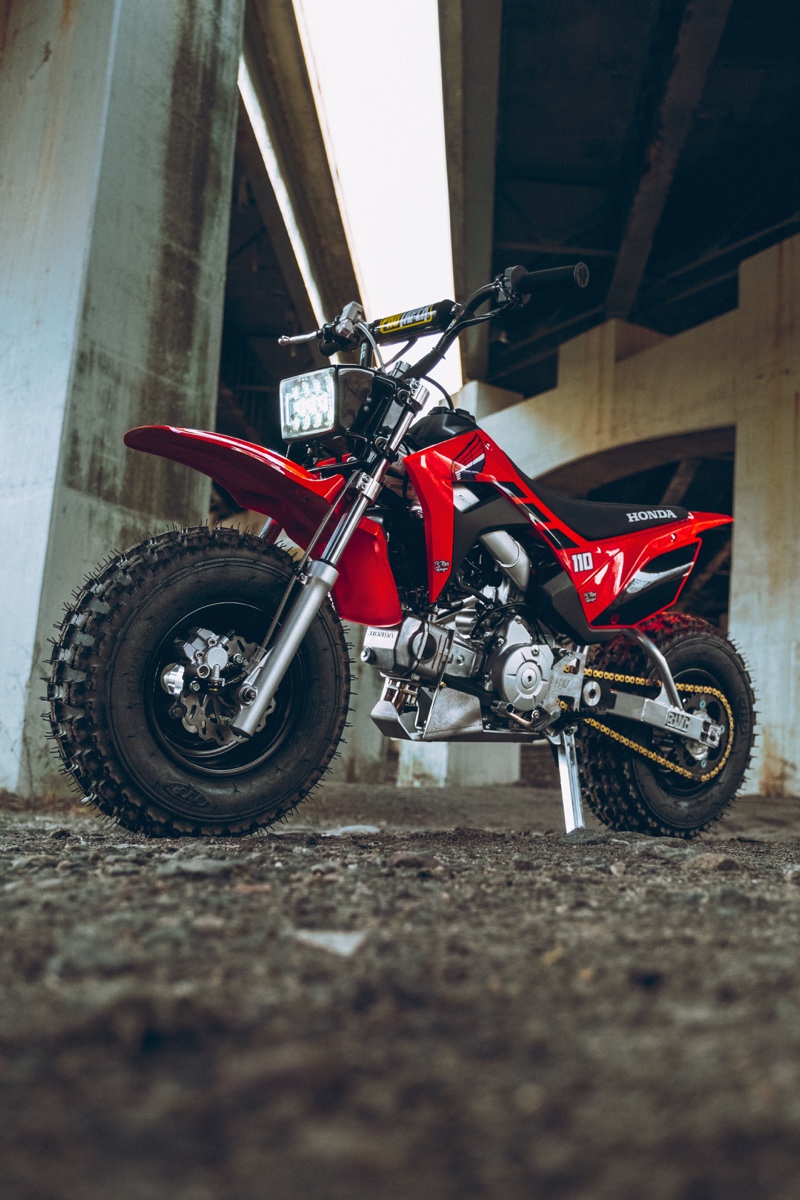 They outfitted their newly christened “BW110” with an LED ATC250R rectangular headlight, ATC200X front fender, stiffer suspension, Yoshimura exhaust, BBR skid plates and reinforced cradle, Throttle Jockeys seat cover, and a custom wrap from Jamie at R Nyne Designs, which harks back to the Honda ATC trikes of the 1980s. The result is one of the baddest, most attention-grabbing pit bikes we’ve ever seen, and A&J Cycles isn’t finished yet. This Honda “BW110” is in line for a significant power boost:

“The next steps are a 132cc Big Bore kit along with new cam, throttle body, intake, injector, and tune from CJR Performance.” Below, we talk to Brian Ballard of A&J Cycles for more details on the build, with more heaters courtesy of photographer Joshua Lagrave (@jlagrave). Pit bike for when we are at the flat track races, and pit bike for my son to ride. Saw BVC Trikes post that they were developing the kit and had to have one. 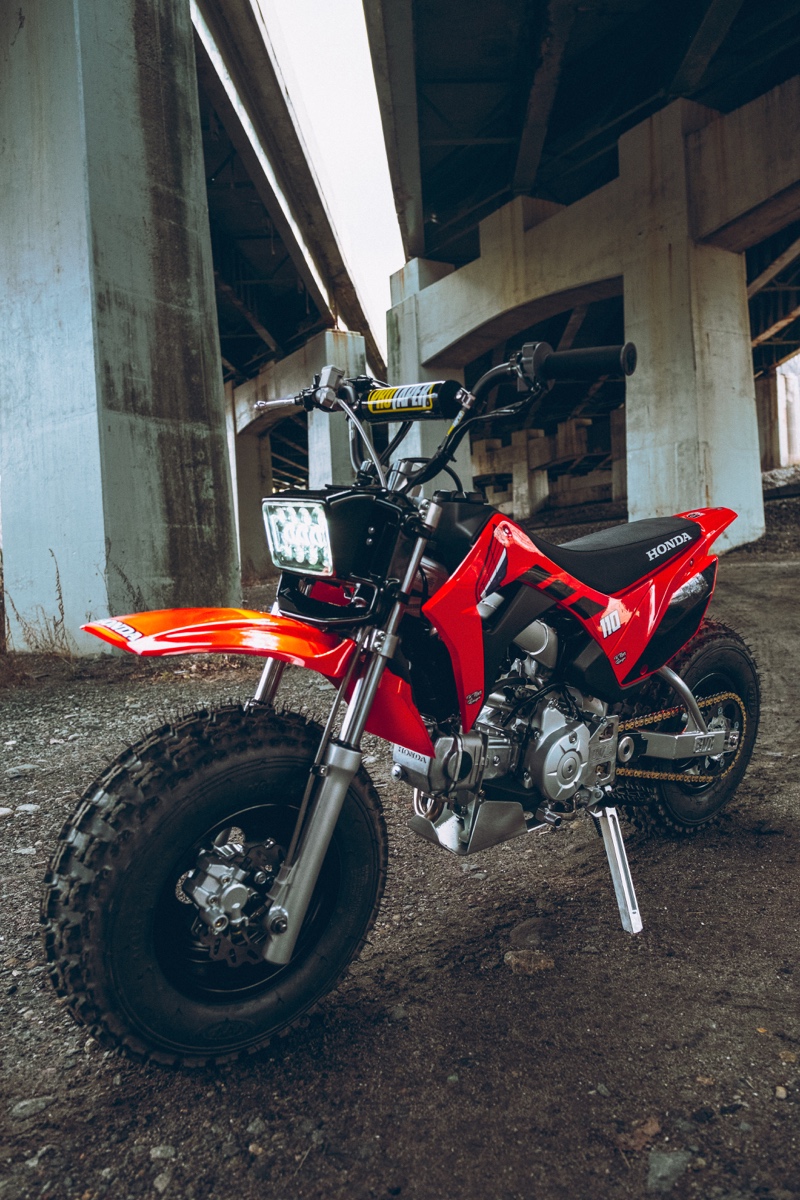 We beefed up the suspension for adult riders with heavier springs front and rear. Taller bars from Pro Taper. New exhaust from Yoshimura, skid plates, cradle, and other bits from BBR.

Seat cover was provided by Throttle Jockeys. Jamie at R Nyne Designs worked with us to come up with the old school wrap incorporating elements from older Honda trikes. It’s a lot of fun; adding the bigger wheels has definitely robbed some power so the next steps are a 132cc Big Bore kit along with new cam, throttle body, intake, injector, and tune from CJR Performance. 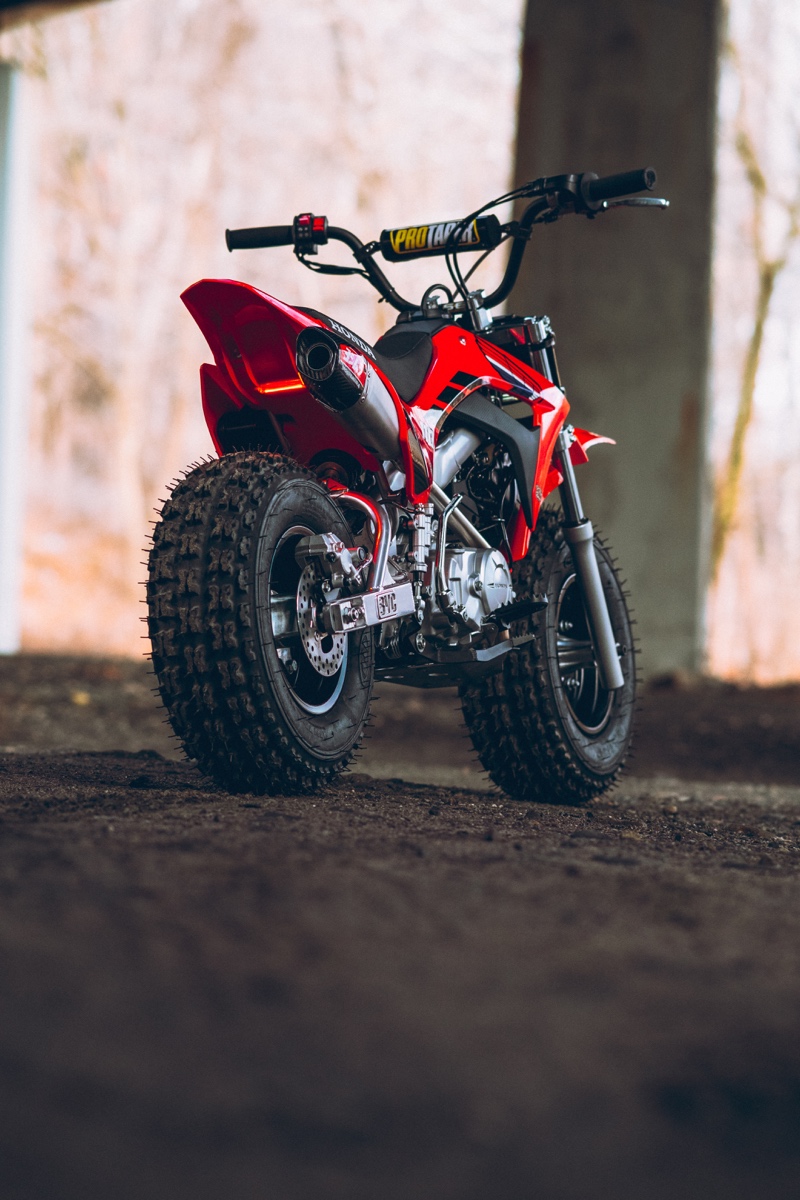 Modern FatCat: Honda CRF110 Big Wheel - ATC-Inspired “BW110” Flat Track Pit Bike by A&J Cycles…  How many of you remember the Honda FatCat? In the mid-1980s, three-wheelers were all the rage, including Honda’s red-hot ATC “All Terrain Cycle” range. For 1986, […] Fast For Fun: Triumph “Traxton R” Street Tracker - From Thruxton to Traxton: Street Tracker from Speakeasy Motors, et al. Introduced at Bike Shed London in 2015, the Triumph Thruxton R was the sharp point of the Bonneville range, a modern café racer with […] Big Wheel: Yamaha XS650 Bobber by A&J Cycles - A metric bobber recalling the Big Wheel trikes of yesteryear… The Yamaha XS650 remains one of the most versatile vintage motorcycles in the hands of custom builders. We regularly see the British-inspired Japanese twin transformed […]