The very first Triumph Speed Triple was released way back in 1994, one of the first factory machines to embrace the “streetfighter” style made popular by European riders. Since that time, the bike has grown in displacement from 885cc to 1050cc, gained more sophisticated suspension and engine management technology, and the iconic dual round headlights have been redesigned into a set of squinty, almost angry shapes.

“The Speed Triple has come a long way from its introduction back in 1994. It’s helped change the way riders look at sport riding on the street, combining comfort with performance.” –Spurgeon, Dunbar, Revzilla

Since 2005, the Speed Triple has been powered by a fuel-injected 1050cc triple tuned for a broader torque curve than the Daytona superbike. In current form, both the S and RS models make nearly 150 horsepower and 85+ ft-lbs of torque, and have become more performance-oriented than ever before.

Of course, any bike with this level of performance can be expensive to insure, even if it’s not a fully-faired superbike replica. Unless you do your due diligence in shopping around, you could end up spending several hundreds per year too much. Fortunately, we can help you find the right company to insure your Speed Triple — one that won’t break the bank. As you probably know, insurance rates are based on a dizzying range of factors, making it very difficult to estimate what any individual rider’s premiums can or should be. However, in order to give you a better idea of what to expect, we’ve surveyed a number of real Speed Triple owners to find out what they’re paying.

As you can see, rates vary hugely from rider to rider and company to company. One reason could be that some companies classify the Speed Triple as a “Standard,” while others place the bike in their “Sport” category — which translates to much higher rates.

Says one of the veteran members of the TriumphRat.net community, in response to another member struggling with high premiums:

“Back to the question, you can get anonymous quotes online from all the major MC insurers — Progressive, Geico, etc.”

Fortunately, we can help you do just that. Enter your zip code to begin.

In 1994, Triumph introduced the very first Speed Triple, powered by a carbureted 885cc inline-three “triple” engine and one of the world’s first “factory streetfighters,” incorporating the naked superbike / streetfighter style made popular on European streets and in the pages of comics like Andy Sparrow’s Bloodrunners.

In 1997, the first-gen T309 Speed Triple was replaced by the T509, the first model fitted with the now-iconic twin “bug-eye” headlamps. The fuel-injected, 108-hp 885cc engine was brand new, as was the aluminum perimeter frame and single-sided swingarm. The T509 was followed by the 955i. 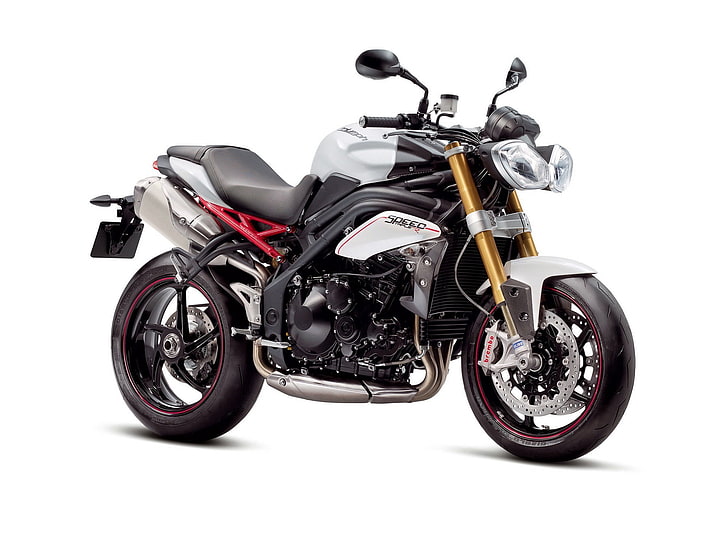 The four-gen Speed Triple 1050 was introduced in 2005, redesigned by Frascoli Rodolfo. The engine was not brand new, but it had been stroked to 1050cc — good for nearly 130 hp. The big news for 2011 was the reshaping of the iconic bug-eye headlights — a controversial redesign. The 2016 model saw 100+ engine improvements, including the addition of ride-by-wire and new ride modes and traction control.

A heavily-revised Speed Triple 1160 is expected in the near future. Sometimes known as the “S3,” the Street Triple has attained a diehard following over the years — a true modern classic.

In late 2007, Triumph released the Street Triple — a bike modeled closely on the Speed Triple, but powered by a smaller 675cc engine. The bike received rave reviews, earning TWO magazine’s “Bike of the Year,” and displacement has grown to 765cc. In fact, MotoGP’s Moto2 class utilizes these 765cc Street Triple engines!

Some riders, when they consider trading up their Street Triple for the more powerful Speed Triple, worry about increased insurance costs. Logically, the Street Triple should be more expensive to insure than the Speed Triple, given the larger displacement, but insurance rates don’t always seem to follow such logic.

Again, the only real way to determine how much more expensive a Speed Triple will be to insure is to request quotes from a variety of companies and compare them. Fortunately, we can help you request and compare quotes from multiple motorcycle insurers in your area.