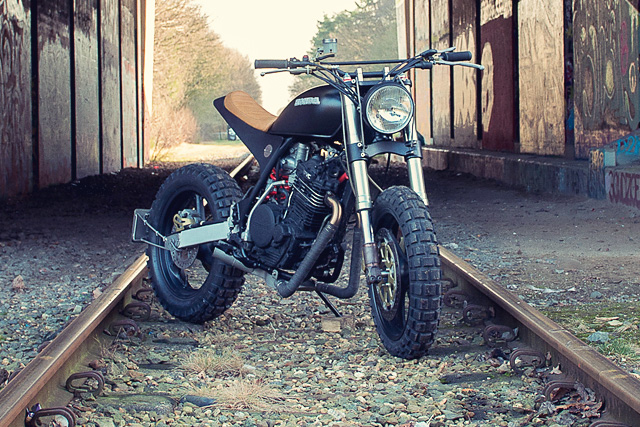 The Honda XR600 is not the platform you normally think of as a custom bike, but Jeroen Potters from Ozz Customs has created a badass enduro-based street tracker/fighter with this build. This is only the second custom bike he’s ever made, but he’s certainly no stranger to speed and he has a reason to want to make bikes as safe as possible. Jeroen lost a leg years ago in a motorcycle accident. He used that
experience and built himself a trike. As a bike, the Honda XR600 has it all. It’s an incredibly successful competition bike in off-road racing, a single cylinder weighing only 136 kilograms. It’s also makes a killer urban assault vehicle with its impressive suspension. It has twin disc brakes and a Suzuki front rim and rear wheel. However the wheels run on a Honda sprocket. Pinning down a genre for every bike is difficult, and arguably useless and limiting, but we think this XR600 is somewhere between a scrambler and
tracker.

The tank is a CB tank made to work with the XR frame. The bike is black with a clear matte finish. The subframe is completely redone. It’s a solid plate steel. Overall the bike has an awesome look, and is certainly worth a check out from anyone who enjoys custom bikes, especially those built from unlikely platforms.