Depending on where you live, governmental agencies can make it tough to build a custom bike that’s both aesthetically-pleasing and road-legal. I can attest to being sent home multiple times from the inspection center with bikes that did not meet the state’s requirements for road-legality. (Once I passed a stripped-down GSX-R through inspection by attaching an electric bicycle horn to the handlebar. Shhh…) 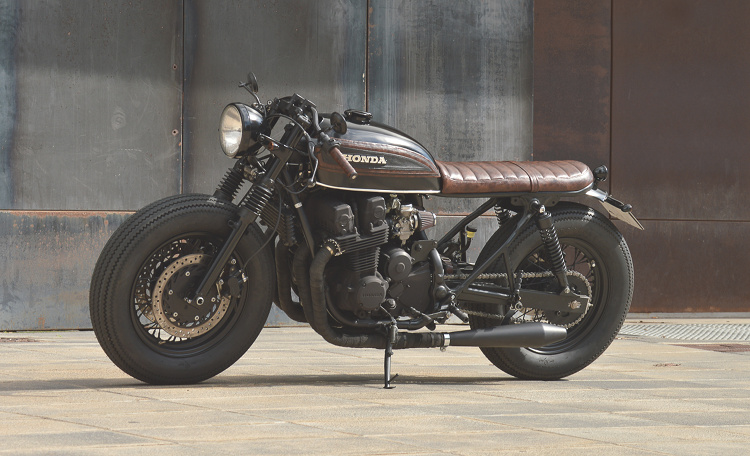 However, the travails of stateside builders pale compared to our Spanish counterparts. In Spain, all motorcycles must have an ITV (Inspección Técnica de Vehículos) certificate to be road-legal, which means passing a fairly stringent inspection at an authorized garage every 1-2 years. This can be quite a challenge for builders like Barcelona’s Overbold Motor Co., who must compromise between design and road-legality. Overbold Motor Co. was founded in the summer of 2015 by Federico “Fred” Cerdá, the Head of Design, and Miguel Angel “Micky” Bou as manager. Out of their workshop in Barcelona’s Poble Nou neighborhood, they build Japanese and Euro cafe racers, scramblers, trackers, and brat styles, constantly struggling to align their creativity with Spain’s stringent “norms of circulation” (ITV). Says Fred:

“Our creations try to respect the highest esthetic standards, without neglecting the functionality of the bike.”

For so new a workshop, the team has made quite an impact, with builds like this CB750 brat cafe. Below, Fred gives us the full story on this build. (Words by Federico Cerdá. Highlights by us.)

Not everything is what it appears, and this transformation of Honda CB750 from ’99 defines perfectly that.
The bike has undergone major changes…

Not the most difficult task, but one of the most important changes for the master design line of any motorcycle is the fuel tank. This one comes from a Honda CB 750K four of the 70’s. We keep the original gas cap but we add a touch class with the side panels in leather brown and black. The full rear subframe was made new and follows the midline of the motorcycle. Cleaning lines and given a really classy aspect. The flat seat was totally created to fix on the subframe. At the rear part, we use rear mudguard coming from an old Triumph. The taillight is a Bates style and the turn lights and plate are located in a legal position for the itv. The front and rear suspensions were modified. For the rear we used a pair of shocks from a Harley-Davidson Sportster. We use it to get the correct height, and they are hard enough for a safe run. The front forks are the originals but we changed the inside springs to get it low. The head light is a big 7″ British style with a classic side mount brackets. We want to give to this motorcycle a really retro face. We used the space of this headlight to accommodate the speedometer and electrical stuff. The handlebar follows this retro line from the Japanese custom. A Renthal ultra low was used, inverted — perfect for the purpose. To keep the old style and clean ideas we removed all the hand controls, and we only used an all-in-one to have access to the lights, blinkers, and the kill switch. The levers are simple and you can check that the master cylinder is not visible on the handlebar. This is because is hidden underneath the fuel tank. The spoke rims are not from the motorcycle, but all the brake, and transmission system is. Finally a classic Firestone Deluxe Champion tires give to this project the perfect equilibrium between a classy, retro and badass style motorcycle. For the final touch, a lot of parts were painted in satin black (fuel tank, headlight, mudguards, bracket, covers, even the blinkers) to have a nice finish combined with the details in leather brown and black like the side panels, the grips and the belt for the battery. Another bunch of parts were powder-coated to avoid the marks and the past of the time.

The legal stuff for the itv was a pain in the ass because in Spain in not possible do something beautiful and legal — well that was like until now. 😉