The Honda NX650 has become one of our favorite platforms for curb-jumping urban enduros and weekend service road blasters. Enter Martin Kvarnhult (Moose Garage) of central Sweden, who built this NX650 scrambler — his first custom — to be his daily rider. Below, we get the full story on this custom dual-sport. Martin Kvarnhult, 39 years old, Sweden. I have a small workshop in central Örebro. This is my first build, but definitely not my last. I realized you can’t buy a bike like this, and I really wanted to have one, so I bought a stock Honda NX650 Dominator from 1991 as a donor bike. A couple of things was important for me accept the design:
• Function, As I will ride the bike daily.
• Clean, minimal subframe (without battery box etc.)
• Street legal (almost) When I googled around for cool builds I found alot of information and inspiration from Andrew Greenland NX650 builds:  http://nx650elsinore.blogspot.se

Sub frame chopped of and a new hoop/brat style sub frame was bent in my shop using sand filled 22mm tubes and then weld everything in right angle. Frame is then sand blasted and powder coated satin black Gastank is Honda CB125 K5 from early 70s that I made dent free with hot glue slide hammer. Inside I made it rust free to add 1000 grams of citric acid and 8liters of hot water and let it sit for 24h, works great. After that I painted the gas tank gloss white (RAL9003) 2part for gasoline resistance by myself. Motor is cleaned and re-painted with 2part epoxy paint. Open K&N air filter. Carburetor is pilojet 48 – main jet 170 with needle schimed up with a washer.

Exhaust is built and designed by myself from 38mm stainless steel tubes and fittings, just tack welded on place to get the 100% fit. Wrapped “headers” with Titan exhaust wrap. GP style slip-on is street legal in Sweden. Battery is replaced by a much smaller Lithium battery that is hidden under the gas tank. Together with CDI and fuse box In a custom metal box Seat is padded on an aluminium seat pan and stitched — all of it is done by myself on my mothers stitching machine.

The design, how the “lines” come together! 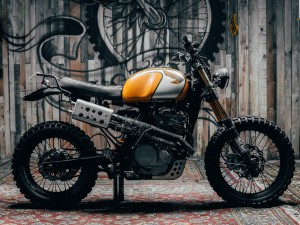