Introduced in 1970, the R75/5 was the largest BMW motorcycle of the time, offering a 750cc, 50-horsepower boxer engine capable of pushing the machine to 110 mph. The entire “Slash 5” or “/5” series, which also included the R50/5 (500cc) and R60/5 (600cc), represented a revolution in the company’s motorcycle design. The bikes featured a new, lighter frame with a large-diameter backbone, along with a new telescopic fork, 1-piece crank, chain-driven cam, and 12-volt electrical system with both an electric and kick starter. Says Motorcycle Classics:

“The overall effect was a machine that, at a little over 400 pounds dry, was much less bulky than the /2, had more power, handled extremely well and had better clearance thanks to the cylinders being farther away from the ground.” Enter Duc Tran of Texas, a garage builder and family man whose BMW R65 urban tracker we featured last year. As Duc says, this 1973 BMW R75/5 “descended” on him by chance, when a good friend and bike collector had run out of storage space and asked him to take one of his bikes home to store:

“Given that I’m a big BMW airheads fan, I was drawn to the red toaster tank /5 like a bug heading toward a light zapper.” Last winter, Duc rode the bike only sparingly, but then the builder bug hit. He purchased the bike from his friend and began the build:

“My builds are done organically with no computer aided drawings. I am my only customer and biggest critic. My goal for this build was to keep it simple and clean, with a touch of vintage elegance.” While the bike was not 100% original and complete, Duc still felt compelled not to cut up the frame or detab it, allowing him to return the machine to original form if desired. With lots of borrowed tools and “beer payments” to neighbors, he created the gorgeous machine you see here. Appropriately enough, he named the bike “HaLong,” which means “descending dragon” in Vietnamese. After all, the bike “descended” on him by chance, and what’s more, riding the bike through the Texas hill country gives him the same peace and tranquility he experienced at Vietnam’s HaLong Bay.

Below, we get the full details on the build from the man himself! I named the bike “HaLong”, which means “descending dragon” in Vietnamese. HaLong Bay is a majestic and picturesque area in Northern Vietnam. There, you will find peace and tranquility. This 1973 BMW R75/5 “descended” on me by chance. I already have two bikes and a Vespa in the garage and really do not have room for another. A good friend, who’s an avid bike collector, asked me one day to take one of his bikes home since he ran out of storage space. It was my choice on the bike. Given that I’m a big BMW airheads fan, I was drawn to the red toaster tank /5 like a bug heading toward a light zapper. I squeezed the bike into the garage to the chagrin of my better half. I told her that I was only holding it for a friend. I rode it sparingly, but over the winter break, I got bit by the builder bug. I asked my friend if I can modify the bike. He came back offering to sell me the bike at a price that I couldn’t turn down. As they say, the rest is history. 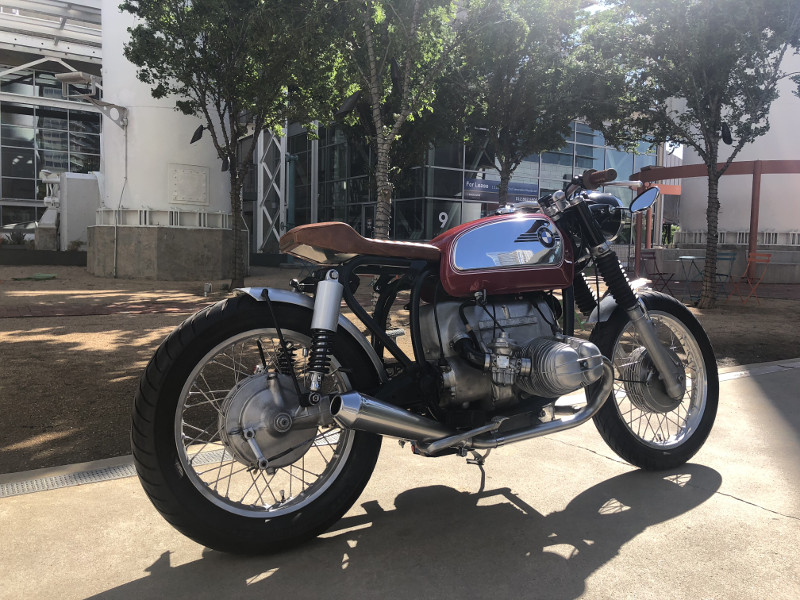 Since the BMW /5 toaster is a classic, I felt compelled not to cut up any part of the frame or detab it. Don’t get me wrong, the bike was not 100% complete and pristine. I wanted to have the option to put it back in the original form if desired. I’m a garage tinkerer with no mechanical or fabrication training. My builds are done organically with no computer aided drawings. I am my only customer and biggest critic. My goal for this build was to keep it simple and clean, with a touch of vintage elegance. I also wanted to retain as much of the bike’s DNA as possible. I challenged myself to make as many parts as I’m capable of. This leads me to borrowing a lot of tools from my neighbors. Believe me, I spent a lot of money on beer as repayment. My work area is ¼ of a two cars garage that was allotted to me. Every time I work on the bike, I’d have to move the other bikes into the driveway. It’s annoying at time, but I had to make it work.

The most expensive parts I purchased was a rear subframe and fender from Vonzeti in the UK. I forgo their seat kit because I wanted to design the seat myself. That was very time consuming because it’s not easy to get the seat right. I made seven different seats out of cardboard. Even my anti-bike family members helped me picked out the final design. I made the seat pan out of aluminum and opted for a rich brown leather that will last for years to come. The most laborious part of the build was refreshing the 46 yrs old engine. I replaced the gaskets and leaking push rod seals. Adjusted the valves and rocker arms. I painstakingly scrub/polish the engine, all the covers, front fork, upper clamps, wheel hubs, and exhaust pipes by hand. None of my other bikes have rear fender, so I wanted to incorporate one for this build. It’s attached to the rear swing arm with a bracket and fender struts. I hand sanded the fenders to give it a brushed aluminum finish and protect it with clear coat. To keep the rear half as clean as possible, I made a battery box and relocated it to the very bottom right behind the 4-speed transmission. A Radiantz LED light strip was incorporated into the seat for brake light. Two small brackets were made that attach the rear Supernova blinkers to the upper shock mounts and ran the wires inside the rear subframe. To keep the build budget low, I went with universal Emgo mufflers compatible with the exhaust brackets on the frame. In the front, I made a small fender that fit in nicely with the existing fork brace. Motogadget M-Blaze were used for front blinkers. The only modern electronic upgrade were the LED blinkers and brake light. To give it the classic look, I opted for Bumm mirrors that are attached to the headlight bucket. The Euro handlebar was swapped for one from an early Ducati Monster. I used leftover leather and made grip covers and a battery strap to add a little handcrafted touch to the bike. It took me 6 months, juggling a full-time job and family activities with three growing kids. I’m thoroughly satisfied and elated with how it turned out. HaLong brings me peace and tranquility when I ride it through the central Texas hill country.