The Kawasaki KZ750/Z750, introduced in 1976, was a 55-hp vertical twin designed for riders who preferred the dependability, character, and easy maintenance of a big twin — a machine that recalled the 750 twins of British marques like Norton, BSA, and Triumph. The big Kawasaki 750 twin packed some modern tech for the era, including a pair of chain-driven counterbalances to curb vibration and double overhead cams. Says Motorcycle Classics:

“Thanks to its simple but robust construction, the KZ750 earned a reputation for rock solid dependability, owners piling on the miles with little more than routine maintenance.” Enter Denmark’s Andreas Hyldgaard Olesen, who shares a shed with five other guys in Aarhus — a workshop they call Östrig Motorcycles. For Andreas, it’s a space he loves, especially since he lives in a two-room apartment in the middle of the city. After cutting his teeth with a trip of Honda CB builds, including a CB550 that serves as his daily driver, Andreas picked up this lesser-known 1988 Kawasaki Z750 twin and decided to build a scrambler influenced by the look of vintage dirt bikes, especially the Penton.

Since Denmark is strict with frame modifications, Andreas decided to eschew a new rear loop in favor of the original tail, fitting a short seat and chrome rear fender to the long square unit — which worked out beautifully. Overall, this 750 twin makes a rugged urban scrambler and gravel machine. Below, we get more details on the build, along with some lovely photos from Gisli Dua (@gislidua). I am 32 years old and live in Aarhus, Denmark. My history with motorized vehicles started when my dad bought me my first Honda Express moped when I was around 12 years old. I bought my first motorcycle six years ago, which was a Honda CB350 Four. It was my first café racer project. Later on, I purchased a CB550 Four and modified that too. The CB550 I still own today and is my daily driver. I really love that bike.

I share a workshop — or a shed, you might call it — in the middle of Aarhus with five other guys. We call it Östrig Motorcycles. I’m not really sure why, but we had to call it something. I really love that place and spend a lot of time there. Especially when you live in the city in a two room apartment. Just for pure pleasure and fun and because I love wrenching on old bikes. The bike will come up for sale in a couple of weeks since I need the room for a new project. I really wanted the look of a vintage dirt bike. Of course, the big Z750 is not the ideal candidate, but I think I managed okay. The design is influenced by old Penton dirt bikes (google them). In Denmark, we have quite strict rules if you want to modify your frame. So, like the Penton, I decided to keep the original rear frame exposed without installing a new rear loop. I bought a new rear fender and fitted it to the original rear fender brackets and made a new seat setup to catch that vintage dirt bike feeling and still having a street legal bike for the Danish roads. The bike was stripped down, frame was de-tabbed and powder-coated. Wheels were powder-coated and fitted with Continental TKC80 tires. New rear fender fitted to the original brackets with a simple LED rear light. 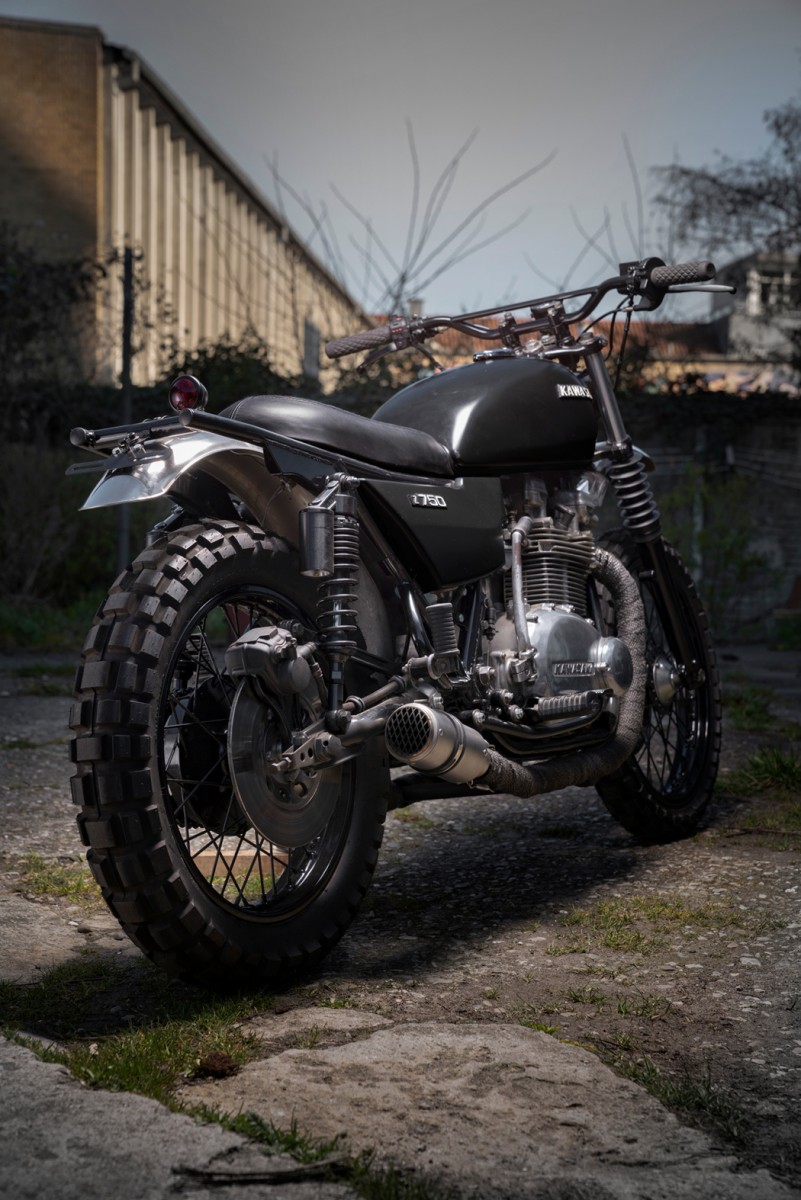 Original Kawasaki front fender raised to the bottom of the triple tree together with a new 4.75-inch yellow headlight in a stainless steel bracket. I would say the rear end of the bike. I was really worried that the long square frame on the Z750 would be a show stopper for what I had in mind, but I really like the result with the chrome rear fender, short seat, and big knobby rear tire. Who is the photographer?