The MBE Motor Bike Expo held each year in Verona, Italy, is the world’s largest custom motorcycle show, a four-day event with over 700 exhibitors and more than twice the attendance of the Super Bowl:

“Motor Bike Expo brings together over 170,000 visitors to Verona, surpassing its own record every year and confirming that it is the beating heart of the international motorcycle scene.” Each year, the Ferro dell’Anno (“Iron of the Year”) contest is held, bringing together some fifteen contestants and a prestigious jury of judges. Rocket Garage describes it like this:

“A contest to give visibility to non-professionals, people who have not yet sold a motorcycle, who don’t do it for trade and maybe in the hope that this visibility can make this passion for some a source of income.“

This year, the award was bestowed on this 1984 Honda CBX750F, built by Simone Lovatti of Garage14 Custom for his friend and client, Joel Matthias Henry. The duo planned to bring the 36 year old sport bike into the 21st century without losing the original charm of the angular 80s machine:

“The idea for this project was to maintain some of the original characteristics of the bike, such as the tank, the graphics and the headlight, obviously slightly revised. It was supposed to be the 2020 CBX.” Simone, who lives in Treviso, Italy, began racing his scooter in the countryside at the age of 12, and hasn’t stopped modifying bikes since then. He says of his workshop:

“My garage is nothing but a tool shed, a bit ugly, but the important thing is the passion and attention I put into my projects.”

Amen to that, sir! Below, we get the full story on this stunning creation, along with some gorgeous photos from owner and photographer Joel Henry. 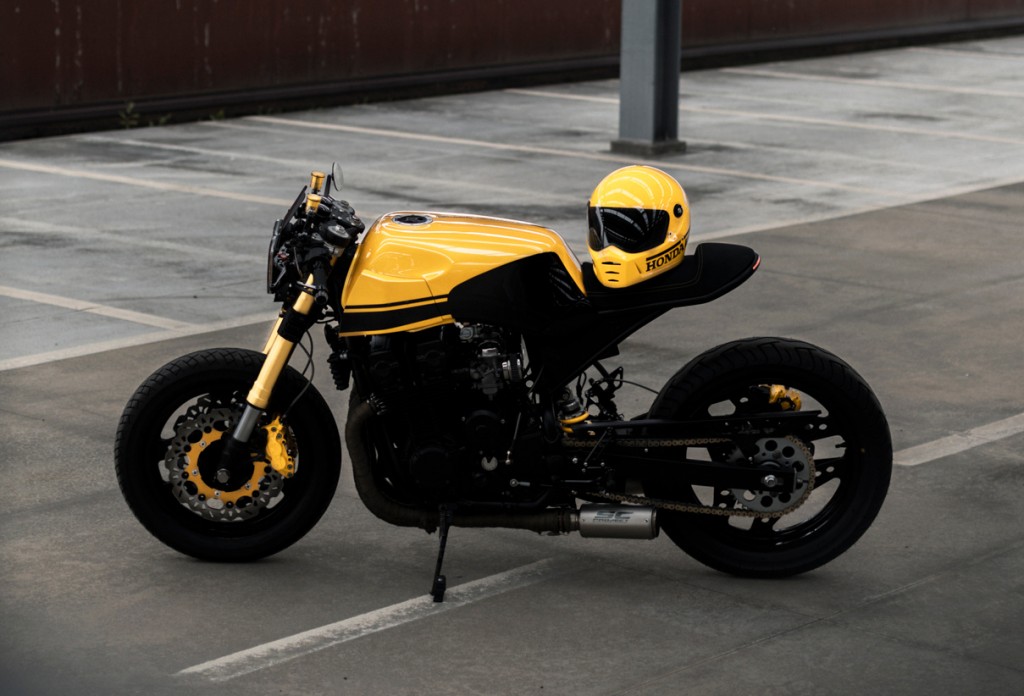 Hi, my name is Simone Lovatti and I live in Treviso, Italy. I am 26 years old and have always had a passion for engines. At 12, I took my first scooter to race in the countryside with friends. Growing up I changed many bikes, obviously none of these has ever remained original. In 2017 I decided to start a new adventure and to customize my first bike, a 1983 Suzuki GSX550ES. I had great satisfactions and so came the first requests, including this latest creation, the Honda CBX750F. With this I won the “Iron of the Year 2020” (Ferro dell’ Anno) in Italy at the Motor Bike Expo 2020. My garage is nothing but a tool shed, a bit ugly, but the important thing is the passion and attention I put into my projects. The bike was created for a client, although I prefer to call him a friend, Joel Matthias Henry. The idea for this project was to maintain some of the original characteristics of the bike, such as the tank, the graphics and the headlight, obviously slightly revised. It was supposed to be the 2020 CBX.

Numerous modifications have been made to the bike. From front to rear: The front forks come from a Morini Corsaro 1200, Brembo four-piston calipers and 320mm discs tailored to fit the original rim. The headlight is original, slightly darkened and fixed on custom metal supports, with a small dome. Motogadget mirrors. Braking master cylinder and clutch. Daytona instruments, suitably inserted in a customized plate. In the fork tube we have a button for starting the motorcycle. The key is no longer present as it is hidden under the seat. The tank is original but with a cap of a CBR1000. The side panels were made entirely of metal, shaped by hand to pick up where the original front fairing used to go. The rear side panels, also in shaped metal, like the tank line and also show the rear frame made from scratch. The bike drives very well, quick changes of direction and great road holding, in addition to the other performance of the braking system. Riding a motorbike leads to feelings of freedom and lightheartedness. When you have a bad day, a motorcycle ride can cure you. However, you must always be very careful. Actually I am proud of the result I didn’t expect to get out of such a bike. However, I am very satisfied with the work done on all the handmade metal parts.