We’re living through one of the most exciting eras of motorcycle development, particularly in the realm of electric technology. MotoGP now hosts the FIM MotoE™ World Cup, Isle of Man racers have been averaging over 121 mph around the Mountain Course in the annual TT Zero race, and custom bike builders are at the leading edge of the action, applying their creative vision, design, and fabrication skills to push forward the evolution of electric motorcycles. As in the early days of motorcycling history, it’s often a lone individual or small group of like-minded fabricators who can accomplish the most, free from corporate group-think and bureaucratic obstacles. One such individual is Toby Roberts of Australia’s Ed Motorcycles — an NSW native who grew up playing with the bikes and buggies around his parents’ service station, outfitting them with whatever motorcycle engine he could shoehorn into their frames. After high school, Toby joined the RAAF and became an aircraft technician working on FA/18 Hornet jet fighters — an auspicious apprenticeship for a young man who would go on to build high-performance electric vehicles like the “Concept Z” street tracker you see here.

After cutting his teeth developing an electric sand buggy and several ultra-quick e-bicycles, Toby took his learnings to the motorcycling realm, where he was heavily influenced by flat track framers like the Zaeta 530:

“The vision for the build was easy. The looks and style of a flat tracker combined with the acceleration of a one litre sports bike.” The frame is a ground-up custom design, the body box is an structural element laser-cut from 6061 alloy before being TIG welded together, and the engine is a Zero 75-7R motor with 52kw peak output and 157nm of torque — translated into petrolhead language, that’s about 70 hp and 116 ft-lb of torque! While Toby has yet to release the official 0-60 time, he describes “crazy acceleration times” and a top speed of ~93 mph with current gearing:

“Scares the shit out of me every time I ride it. Although the power delivery is very smooth and linear it feels endless. I haven’t had the bike at full throttle yet. I need to get a professional rider onboard to test the limits…” The bike was recently featured by our friends at Pipeburn, and Toby is now looking to further develop the Concept Z and get it into production.  He’s looking at both expanding the team and securing investment to push forward with this unique machine. If you’re interested to know more, you can contact Toby at Ed Motorcycles here:  www.edmotorcycles.com.

Below, Toby gives us all the nitty-gritty details on this stunning street tracker!

Concept Z: In the Builder’s Words 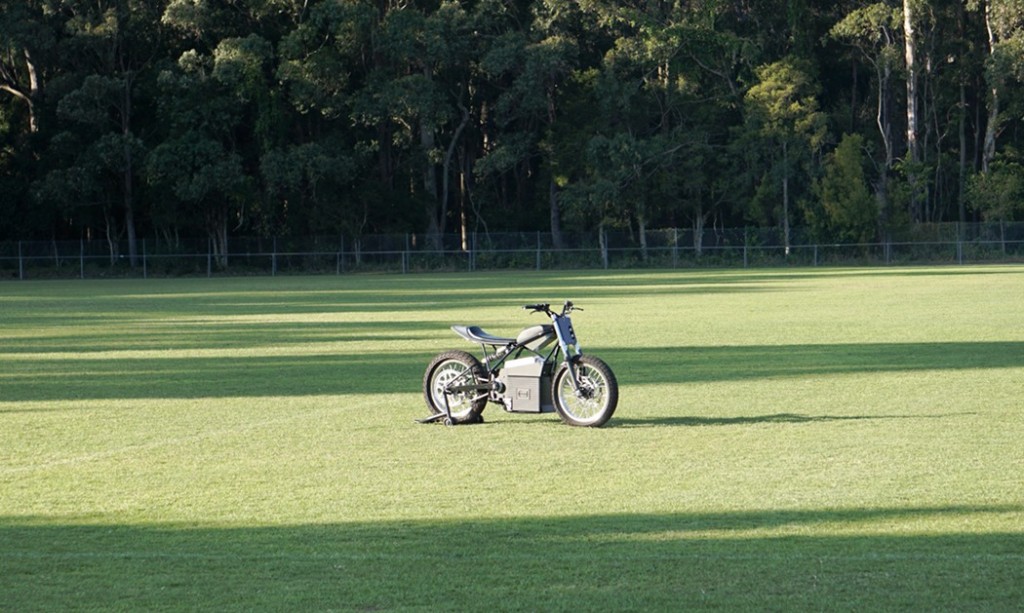 Electric Vehicle History – As a kid my parents owned and operated a service station and mechanical shop in Kandos, NSW, and I spent much of my spare time playing around with motorbikes, old cars and buggies powered by whatever motorcycle engine I could source cheap.

After high school I joined the RAAF as an aircraft technician and completed my trade working on the FA/18 Hornet Jet fighters based out of Williamtown, NSW. With some play money now in my bank I quickly acquired two single seat performance off road buggies powered by high capacity road bike motors for use on and around Stockton Sand dunes.

One afternoon in early 2007 my brother showed me a video of an electrified Datsun 1200 named “The White Zombie”. This car had been converted into electric and was beating down gas cars on the drag strip. After a little research I decided that electrifying one of the buggies could make a great hillclimb race vehicle with torque on tap. A buggy was stripped back and the suspension and drive train redesigned and built. A large series wound DC motor was mid-mounted and electrical components similar to that in the White Zombie utilised. Running AGM lead acid cells it gave me a punch for about 10 seconds before the Peukerts effect pulled up the current flow, greatly reducing the performance. Not having the finances to purchase high power lithium, the project was abandoned and the electric drive train used in converting a Honda Civic. This car was then engineered, registered and used around the streets of Newcastle and for my work commute.

Scaling my projects back for a few years I moved onto building several electric bicycles all of which were well over the legal power limits and would easily push me along at 65km/h. I then started converting a mighty Honda CT110 postie but quickly realised I’d be disappointed with the performance and with that the first brain spark of the concept Z was ignited. Loving the look and style of the flat track framer motorcycles, I was heavily inspired by the original tubular framed Zaeta 530 flat track race bike. The vision for the build was easy. The looks and style of a flat tracker combined with the acceleration of a one litre sports bike. The actual build was a little more involved…and whilst recovering from shoulder surgery I utilised this time to start designing and drawing what I now had clearly envisioned in my head.

The bike was designed and built in three major components: The frame, the body box, and the battery.

Motor frame mounts, motor adapter, frame pickup points, swingarm pivots and headtube bearing cups where all CNC machined by Melbourne based company Flexicut over the course of the build. The frame is made up from tubular 4130 Chromoly and is a ground-up custom design. Pickup points were set out in CAD modelling before several jigs were utilised to get everything to sit in place for me to tack weld. From here the frame was taken to an ex-aircraft welder mate for full TIG welding. The swingarm followed the same build process as the frame and was then fitted with internal CNC’d axle blocks. Both frame and swingarm have been powder coated black.

The body box is a stressed component forming an active structural element of the bike (the same relationship between the frame and motor of a Ducati motorcycle) and provides mounting for the battery box. The body box was drawn up in CAD and all parts were laser-cut from 6061 alloy before being TIG welded together.

The motor is mounted to the frame by an elaborately designed CNC’d adapter which performs three functions. It holds the motor securely in place and concentric with the swingarm pivot, allows the swingarm to pivot through its full degree of motion, and provides an additional thermal mass for improved motor cooling. A small air duct has also been fabricated and fitted on the underside of the frame and rams cooling air up and around the front side of the motor. The bike is fitted with the Zero 75-7R motor. This is an air-cooled, radial flux, interior permanent magnet brushless motor which is setup to deliver 52kw peak output and 157nm of torque at the shaft. Testing carried out to date has seen crazy acceleration times with figures yet to be released (stay tuned). What’s even better news is that the design will also accommodate other high performance electric motors. One motor in particular is the outrunner from Slovenian manufacturer Emrax. Their 228 model motor will fit straight in and could increase power and torque figures significantly whilst also saving a little weight…

A Co-axial design is incorporated into the bike’s drive train with the motor driveshaft and swing arm pivot sharing a common axis. This setup eliminates chain deviation through suspension travel (no chain slap here!) and will allow for the use of a super quiet belt drive if desired.

Gearing has been calculated to optimise the torque curve of the 75-7R motor. Motor RPM and wheel RPM have been aligning so that the maximum possible torque is provided throughout the 0-100km/h sprint. A custom 65t rear sprocket was supplied by Extreme Creations in Sydney to obtain the desired gear ration. Torque at the rear axle is calculated at 850nm minus the chain loss and full stick with current gearing will see a top speed just shy of 150km/h. The motor controller is a 775 Amp Sevcon Gen 4 Size 6 and is mounted within a custom designed and CNC machined aluminium heatsink for cooling. The heatsink is also directly mated to the top of the aluminium body box allowing for additional transfer of heat into the body box’s large exposed surface area to further increase cooling. Motor and controller heat is any performance electric vehicle’s worst enemy and a lot of time and effort has gone into designing the systems and configuration of the bike to effectively manage this heat without the complication of water cooling.

The battery is a complete custom unit built in-house and configured using A123 AMP20 pouch cells. The pack incorporates high current PCB and copper terminals (supplied by Chris Jones at Voltron Motorcycles in Perth, Western Australia), a fully sealed polycarbonate enclosure, aluminium housing and CNC machined side cooling plates. This component was built up in-house over several months. Rated at 99v nominal and capable of busts of 1200A for a 10 second period, the battery is more than capable of supplying the 775A Sevcon Gen4 Size 6 controller with all the electrons it needs plus some.

Battery is position low and forward on the bike for optimal weight distribution and the mounting style will accommodate changes in battery size and configuration with no modification required to the body box or frame. With future advancements in battery technology an upgraded pack can be implemented with minimal changes. The tank is a two-piece component. The lower side was fabricated from sheet alloy and TIG welded. It contains the 12v auxiliary system, wiring and a small storage area for keys, wallet, phone etc. The top half is composite and was hand-shaped. This will eventually house a data display but I’m still not completely satisfied with the shape. Feedback from readers regarding the tank shape would be great?

Yamaha YZF-R6 front forks are fitted up front with the rear using a Honda CR85 rear coil over shock with shortened clevis and 38n/mm spring rate.

Seat was hand-shaped from high density foam and covered in marine vinyl before being attached to the Knight-style fibreglass seat pan.

Scares the shit out of me every time I ride it. Although the power delivery is very smooth and linear it feels endless. I haven’t had the bike at full throttle yet. I need to get a professional rider onboard to test the limits…

ED Motorcycles – Where to Next for the Concept Z?

Ed Motorcycles was formed in late 2019 with the aim of turning the Concept Z into a production motorcycle. Ed Motorcycles is currently exploring funding options to further develop this unique electric motorcycle and get them on the streets. Interested to know more, please contact Toby at Ed Motorcycles: www.edmotorcycles.com