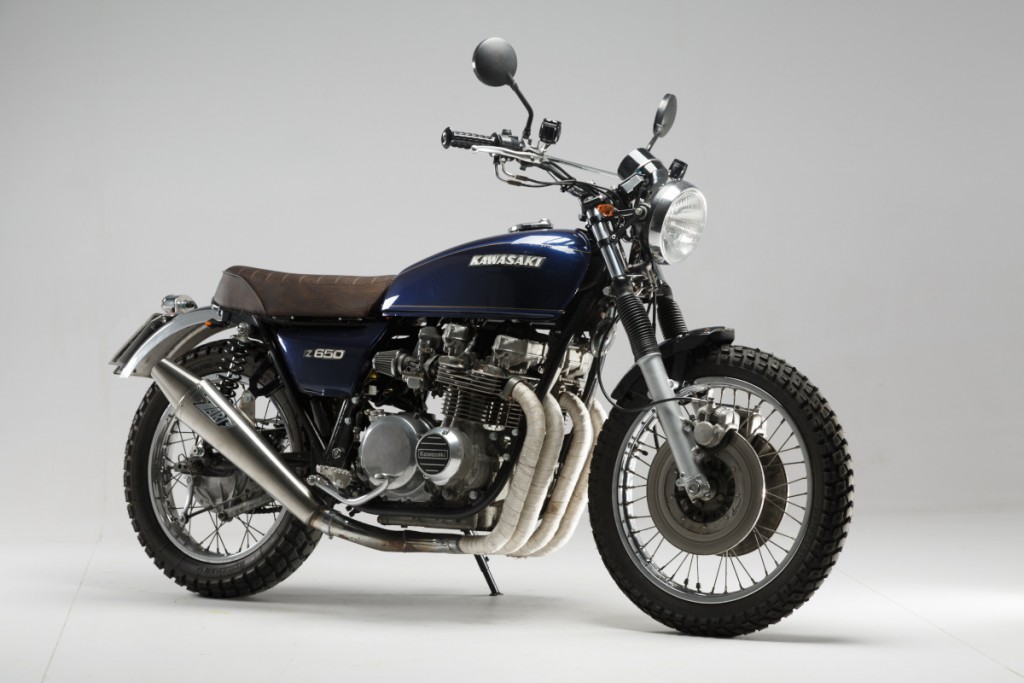 The Kawasaki Z650 was designed by none other than the grandmaster himself, Gyoichi “Ben” Inamura, designer of the legendary Z1. Introduced in 1976, it quickly earned as reputation as the “Son of the Z1,” and for good reason. The Zed 650 mixed the quick handling of a 500 with the power of a 750, impressing riders right from the start.

“The Z650 is every bit a scaled down version of the successful Z1 design and, as such, it shares much of the looks and a good deal of the performance too. Often played down in the family tree, nestling in the shade of the larger machines, the Z650 is arguably a pivotal moment in Kawasaki’s success.” —Classic Motorbikes Believe it or not, the Z650 was the first Japanese bike to have a formal press launch. In late 1976, Kawasaki air-shipped six of the new machines for moto-journalists to test at Ingliston Race circuit on the outskirts of Edinburgh, Scotland. The tight and twisty track was the perfect place to showcase the Z650’s prowess. “The light weight of the design coupled with an impressive 41 ft-lbs of torque enabled it to blast up the quarter mile in around 14 seconds, less than a second adrift of its larger capacity sibling. With over 120mph on tap, the top speed was little down on the bigger bikes of the period making the Z650 a genuine alternative to a bike 750cc or above.” —Classic Motorbikes Marketed in the States as the KZ650, the bike would become an epitome of the UJM (“Universal Japanese Motorcycle”) and help to spawn a whole squadron of air-cooled four-stroke middleweights from various manufacturers. Recently, we heard from Jürgen Swora of Germany, who is a co-founder/owner of one of the best-known names in motorcycling, SW-MOTECH.

“In 1994 mechanical engineer Jürgen Swora built a tail tank for his Africa Twin to be ready for a motorcycle tour together with his friend Jörg Diehl to Libya. Many motorcyclists were interested in the tank. And so a dream trip was made a reality and a business idea was born in North Africa. Together with Kai Jockel the two founded their company in 1999.” —SW-MOTECH Today, SW-MOTECH has more than 300 employees, exports motorcycle parts and accessories to 70+ countries, and continues to be a leader in innovation. Jürgen says he’s been riding motorcycles since he was 14, progressing from wrenching in his dad’s garage, to an old garage he rented during his university days, to the home moto “playground” he now enjoys. And he certainly hasn’t lost his passion for restoring and customizing motorcycles, as evidenced by this 1977 Kawasaki Z650. He picked up the bike back in 2011 and decided somewhere along the way to rebuild it as an 80/20 street scrambler, modifying the subframe, saddle, fenders, lighting, gauges, intake, exhaust, and more. One thing we love about this build is how factory-built it appears, as if Kawasaki had offered a scrambler version of the Z650 in the 1970s, not unlike Honda’s CB/CL versions. Below, we talk to Jürgen for a few more details about himself, his workshop, and the Z650 you see here.

Maybe you know the company SW-MOTECH. I am one of the owners and founder of the company. The company has been in existence for 22 years. Since I was 14, I’ve been riding motorcycles. In the beginning I was just working in my dad’s garage. Later when I was in the university, I had an old garage. Now I have my own playground at home — see pics below! Bought in 2011, and rebuilt as a scrambler. I like to customize bikes. Not really but sometimes I call it “THE Z.” No – just made the bike and several others.