Honda introduced the CB500 Four at the 1972 London Racing and Sporting Motorcycle Show, where it was touted as a smaller, lighter version of the company’s revolutionary CB750. The 498cc SOHC inline-four engine made a round 50 horsepower, good for a top speed of 100+ mph, and reviewers soon raved at the bike’s handling prowess:

“Handling of the new ‘little’ four was excellent, aided in no small part by an almost 80-pound advantage over the CB750 Four…. Additionally, the 500’s engine was significantly shorter than its big brother, thanks to its smaller displacement and over-square design (larger bore than stroke), which kept cylinder height down, giving a lower center of gravity. Where the 750 was often faulted for vague handling, the CB500 Four was lauded for being stable and predictable if perhaps still a bit slow-steering.” —Motorcycle Classics Unlike the 750, the 500 Four featured a wet-sump oil system and beefier “hyvo” chain primary drive. Many Japanese motorcycle enthusiasts, then and now, came to prefer the CB500 and its successor, the CB550, to its big sibling. However, it was a bike more suited to twisty canyons and rolling country roads than flat-out, straight-line speed…until Guynes got his hands on one. 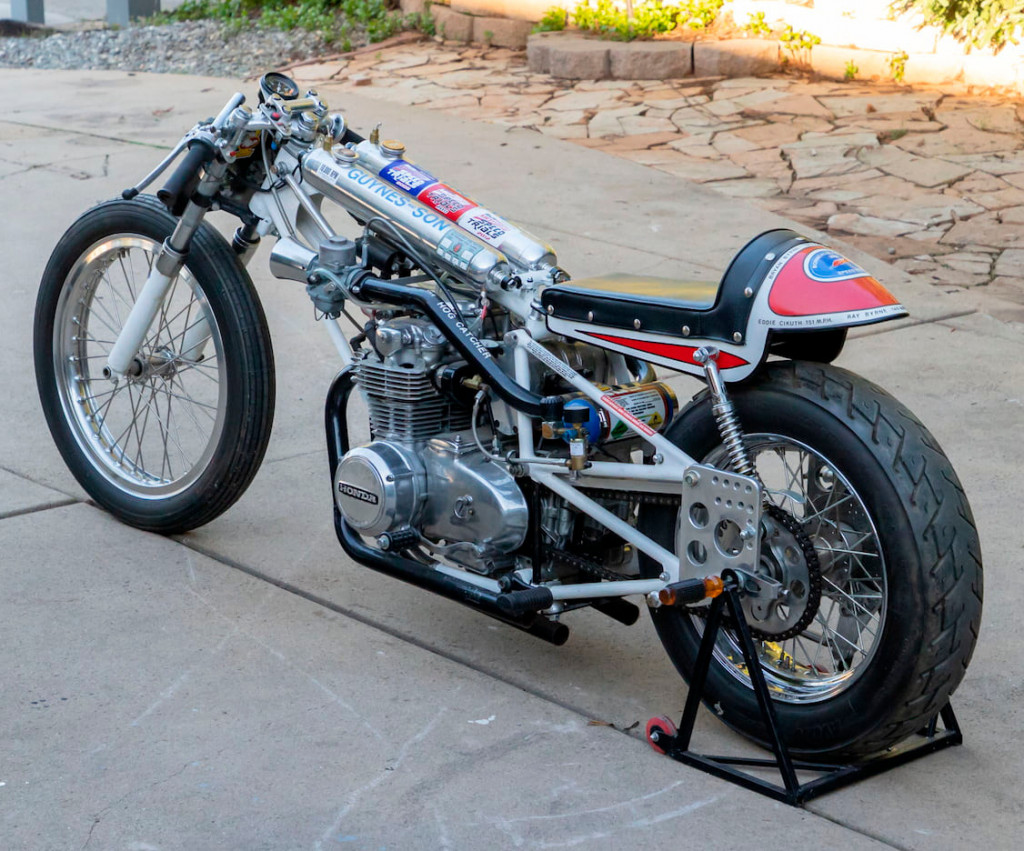 The Hog Catcher runs an engine-driven compact roots supercharger that’s fed by a pair of remote-mounted constant-velocity (CV) carbs from a Honda S600 sports car, with a NOS injection system pumped into the boost side. A pair of gas cylinder fuel tanks, reminiscent of those on a vintage drag bike, hold the fuel to feed the blown Four. So how did the Hog Catcher perform on the salt?  Here’s what we could find out:

“Legend has it that the Hog Catcher made it out to the Bonneville speed trials, but mechanical gremlins prevented any runs at the record. All systems were a go at the shop, but the fuel system and carburetors proved recalcitrant in the salty pits. The long tow out damaged a brass float, but the culprit was discovered too late for the run.” However, the stickers indicate that it was also run at El Mirage Dry Lake and the Bub Speed Trials, achieving speeds of at least 151 mph — 50 mph more than the stocker’s top speed. We’re still working to uncover more details and will update you as we find out more. Let us know if you know more about this sweet piece of land-speed history, which recently sold for $7700 at Mecum’s Las Vegas 2022 Motorcycle Auction.