A Honda supermono inspired by the Honda racers of old…

The Honda NX650 Dominator has proved itself as one of the most versatile two-wheeled platforms of the modern era. The single-cylinder radial-valve engine put out a solid 44 horsepower, while the dirt-bred chassis and street-oriented running gear can be focused toward either riding style. Giving the machine’s dual-sport heritage, we normally see Honda Dominators customized into scramblers or street trackers, but Maria Arellano and Jona Gimenez of Petrology had a different idea: to transform one of these big-single trailies into a street racer inspired by the Honda racing machines of the 1960s. Such a transformation isn’t such a stretch, given the NX650’s surprisingly sharp handling on the tarmac. We’ve shared this 1992 Bike magazine review before, but it begs another highlight:

“At the beginning of every stretch of tatty, twisty B-road should be a sign saying ‘Beware of the Dominator’. Then at least the poor little racer-replicas straying from the smooth and curvy might have some inkling of what is going to  happen to them. As it is, they are Dommie-fodder. Before racey-boy has time to regret trying to scratch on a horrid bumpy lane, the lurking Dominator swoops past him in a flurry of flying chippings and boinging suspension. Resistance is useless; the Honda will not be caught by anything…. It turns twisty B-roads into Donington Park with  hedgerows. The Dominator really is that good.” —Bike magazine, 1992 As with many projects, the tank ended up being the heart of the build. Says Jona:

“Starting the project from an NX donor, we began sketching the motorcycle in 3D renders, looking for that racing feel that we where looking for. We decided to move forward with an old Honda gas tank like the ones used on the racing motorcycles from the 60’s (1966 Honda RC166 250-6).” From there, they added upgraded brakes, high performance tires, custom tail section and front fairing, and more. Nicknamed “The Racing Dream,” this street-focused supermono not only looks the part, but Jona says the riding sensation is the real treat:

“Freedom, it’s the sensation that describes this motorcycle. The riding position puts you on top of everything that is happening. How it handles and the torque is just incredible…. Besides that, simply everyone looks at your bike.”

Below, we talk to the Petrology boys for a few more details on this super-single street racer. Petrology was created in 2015 by Maria Arellano and Jona Gimenez. Their passion for design, motors, and fashion united them to create a unique project. What was for years a hobby for the founders of Petrology, now it had become a lifestyle.

María and Jona always felt admiration for classic machines, especially those of the European brands — models that during the years of 70’s and 80’s broke molds. Vehicles with lines that were innovative and would shortly become global icons.

Together they have given shape to the brand that unites their passions, wanting to pass on to their millennial generation the meaning of driving a car from those times. Getting behind the wheel of a car that no one cannot look at, feeling the passion and history of the automobile. 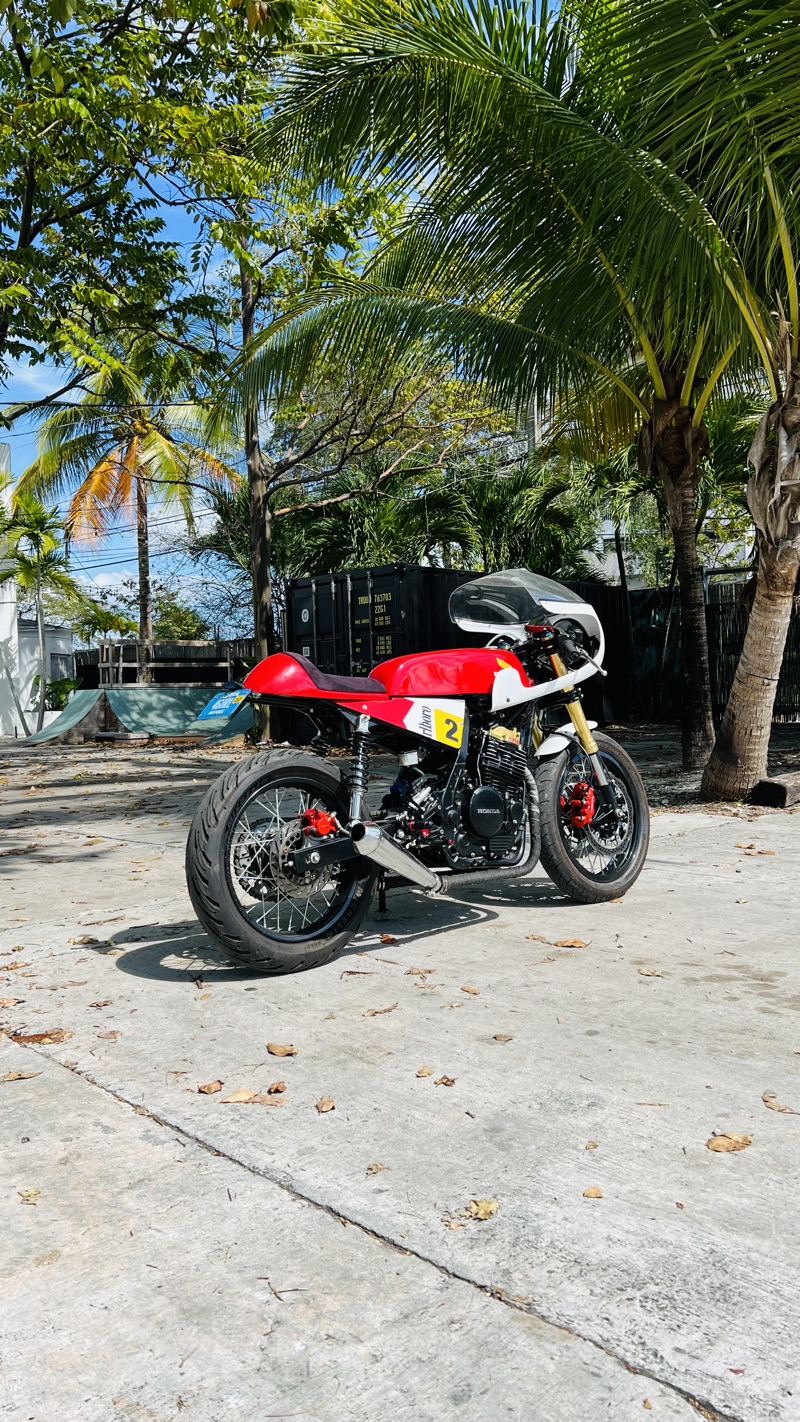 The design was influenced by the old racers.

Completely rebuilt one of a kind racer. Loaded with extras and an artisanal exhaust made by SG Motors, letting the 644cc / 44-hp engine breathe. This unique racer is ready to be driven on the streets of any wonderful city. Starting the project from an NX donor, we began sketching the motorcycle in 3D renders, looking for that racing feel that we where looking for. We decided to move forward with an old Honda gas tank like the ones used on the racing motorcycles from the 60’s (1966 Honda RC166 250-6). Then we added Tokico brake pads and discs, slick tires, a handmade red tail section with seat, and a new fork to complete the look. Finally the most interesting part of it that would give it the final look was the front racing fairing. Freedom, it’s the sensation that describes this motorcycle. The riding positions puts you on top of everything that is happening. How it handles and the torque is just incredible. The shifting makes it a unique experience, which gives you a hint back to how racers felt in the 60’s. Besides that just simply everyone looks at your bike. The stance and riding position of the bike is incredible.