In last few years, we’ve seen the rise of “BMX Cubs,” hybrid builds that combine the engine and wheels of a Honda Cub with BMX-style frames, handlebars, and geometry. The result is the dream of every kid who ever stuck a baseball card in the spokes of their BMX to create that card-based BRRRRAAAAP that sounded so much like a motorcycle. One of the workshops at the head of the trend is Enggal Modified of Banyuwangi City, Indonesia. Enggal himself founded the workshop back in 2004, when he was still in high school, and the shop’s notoriety has spread not only to the top echelons of Indonesian custom culture, but worldwide:

“My workshop does a lot of things, from daily motorbikes to customs to special motorbikes for contests. We’ve managed to bring home many trophies. In 2019 we won the contest held by Suryanation Motorland and went to Mama Tried Show 2020 in Milwaukee.” Though Enggal Modified works on many different bikes and customs, they have a special love for these hybrid BMX builds: 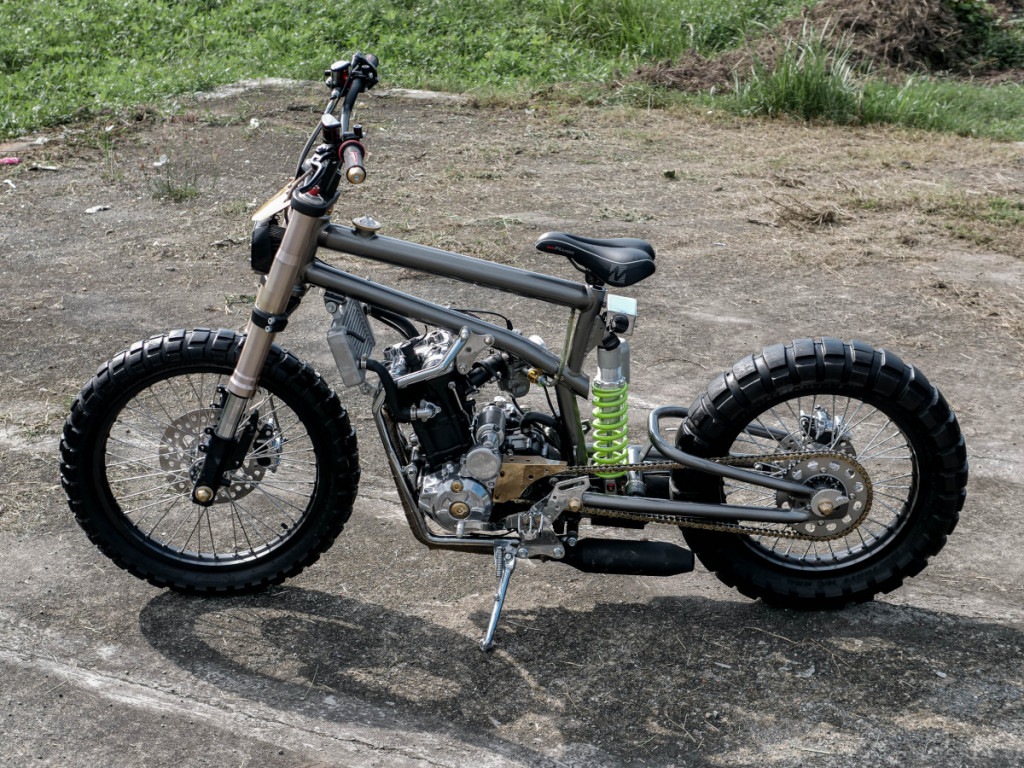 Usually, these builds are powered by single-cylinder horizontal engines in the 110cc to 125cc range, like those produced by Honda and Lifan. But Enggal did something special this time around… In 2016, the Ninja 250L, also known as the Ninja RR Mono, replaced the two-stroke Ninja ZX-150RR that had been in production since 1991. The liquid-cooled 250cc engine, which is also used in the KLX250, makes 28 hp and 17 lb-ft of torque — substantial numbers when mounted in a lightweight BMX-style steel frame! Says Enggal:

“The feel of the ride is just insane — high power with such a lightweight body — it’s so agile.” As you might imagine, the frame had to be custom-built to fit this larger, 250cc vertical engine and radiator. Many basic BMX Cubs have a rigid chassis, but Enggal knew this BMX Ninja would need suspension to handle the higher speeds. It’s running a set of USD Showa forks from a GSX-R750 up front, and motocross suspension out back — along with disc brakes at both ends and Shinko Big Block rubber. Now we just have to book a ticket to Indonesia to test-ride this little monster! Below, we talk to Enggal for the full details on the “Bulldog.” Hello my name is Enggal, and I’m the owner of Enggal Modified from Banyuwangi City, Indonesia. My workshop was founded in 2004 — since I was in high school. My workshop does a lot of things, from daily motorbikes to customs to special motorbikes for contests. We’ve managed to bring home many trophies. In 2019 we won the contest held by Suryanation Motorland and went to Mama Tried Show 2020 in Milwaukee. We have a favorite product, the BMX Cub, which we have produced since 2018 with a total of 1400 frames. The BMX Cub comes with various types of engines such as 110cc / 125cc manual shift and automatic engines. But then we made the first 250cc BMX Cub with a Kawasaki Ninja SL 250cc. We built the bike for ourselves, but the bike was sold to somebody when we posted it on Instagram. The design concepts takes inspiration from BMX bicycles, which we mix with an engine and dual-purpose tires. The frame is custom-made to look like a BMX bike.
We mounted a Kawasaki Ninja 250cc single-cylinder engine.
The front suspension uses upside-down Showas from a GSX-R750.
For rear suspension , we with a motocross mono-shock.
We used Shinko Big Block 120/70-19 for the front and  Shinko Big Block 150/70-17 for the rear.

The feel of the ride is just insane — high power with such a lightweight body — it’s so agile.