The Honda CB550 is perhaps the perfect cafe racer candidate. The bike packs a strong punch from its gutsy middleweight inline four, and the handling is lightning-quick and crisp. Donor bikes have become more expensive in recent years, but there is a large aftermarket to help the garage or shed builder in need of parts or expertise. Czech Yourself: Honda CB550 “Respect” - A Prague-built 550 Four from Gas & Oil Bespoke Motorcycles…  While the CB750 may have grabbed the world’s attention as the “Original Superbike,” many Honda SOHC enthusiasts will tell you they actually prefer the CB550 […] 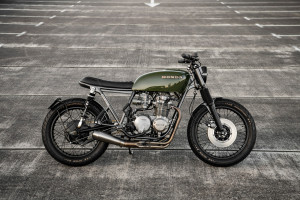 Nius Moto: Honda CB550K Roadster - The Honda CB550 remains one of the sweetest midsize machines ever produced, a 50-bhp inline four that handled well, ran sewing-machine smooth, and had the gorgeous looks of the heavier CB750. “Like it’s larger sibling, […] 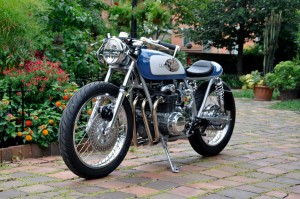 Project Clean Slate: Honda CB550 Cafe Racer - Ohio’s Mark Colasante builds a 550/4 dream machine…  When it comes to Honda’s four-cylinder machines of the 1970s, the CB750 has always received the lion’s share of the limelight. It was a groundbreaking machine — […] 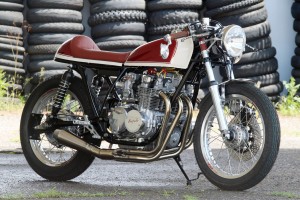 “BBCB” Honda CB550 Café Racer by GMW - Gaston Motorcycle Werks builds a best-in-show CB550… One of our favorite motorcycle events each year has become The Congregation Show in Charlotte, North Carolina, hosted by the good folks at Prism Supply and DicE Magazine. […] “Jersey” Honda CB550 Cafe Racer by Kott Motorcycles - “A sleek, stripped down version of what this bike could have looked like straight from the factory…” Built from 1974 to 1978, the Honda CB550 was the company’s middleweight four, featuring an 8-valve engine that […] 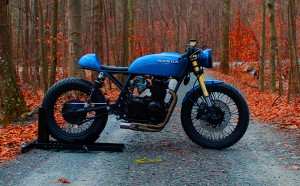 Honda CB550 “MD01” by MOTODesign - Nine Years of Vision: Barn-Built CB550 cafe racer from New York… The Honda CB550 is one of our favorite platforms for a custom build. While the 38-hp middleweight didn’t have the outright power of the […] Honda CB550 Monoshock Cafe Racer -   A father/son Honda CB550 cafe racer build with custom monoshock conversion… Honda’s four-cylinder middleweight, the CB550, is one of our favorite platforms for a cafe racer build. While the air-cooled SOHC engine doesn’t have […] Grey Ghost CB550K Cafe Racer - Today, we are thrilled to present one of the most beautiful vintage Honda builds we have ever seen:  the Grey Ghost, a 1977 Honda CB550K cafe racer built by Alchemy Motorcycles of San Diego. Previously, […] Honda CB550 Brat Cafe by Eli Carver - We were lucky enough to meet some incredible people at the 2017 Handbuilt Show in Austin. The bikes in the show were off-the-charts, as always, but there was also a staggering lineup on the street […] Honda CB550 Cafe Racer by Macchina Salvobros - There are a lot of “bolt-on” cafe racers these days. We have nothing against that — there is an art to sourcing the right components for a build, and few parts bolt on without some […] Honda CB550F Cafe Racer by Other Life Cycles - We found this oh-so-clean 1975 Honda CB550F cafe racer through Denton Moto Collective of Denton, Texas, who recently listed the bike as their #motoinspiration of the day. Nicknamed the “F-Bomb,” the bike was built by […] Honda CB550 Brat by Ironwood Custom Motorcycles - (Written by Mark Turner.) Thankfully we are all individuals. Some of us like big women, some like marmite, some like to wear women’s clothing on a Thursday night and call themselves Mildred. Personally, I like […] Mono-Shock CB550 Cafe Racer by Alchemy Motorcycles -   Today we’re thrilled to present this 1978 Honda CB550K built by Michel Valle of Alchemy Motorcycles, located in San Diego, CA.  We found this bike on Instagram (@alchemymotorcycles), and it jumped out at us […]