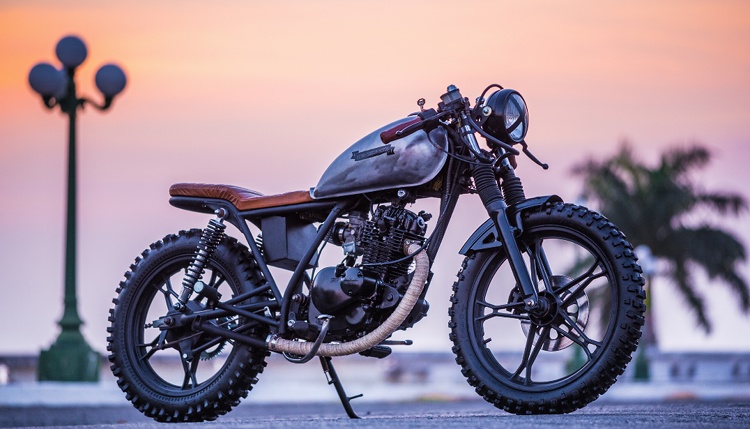 The Suzuki GN125 has been a hard-to-kill, real-world workhorse since the 1980s.  However, it takes a special eye to see the beauty hiding behind the bike’s slightly funky factory looks.  Canadian journalist Jeff Campagna is just the man.  Jeff, whose work has been published everywhere from The Daily Beast to Vice Magazine, has been living in Panama for the past seven years, building an array of badass brats and customs as part of Istmo Customs.  Jeff has recently moved back to Ontario, where he will be continuing to build bigger and better bikes.

He recently gave us the rundown on this sweet little Suzuki GN125 custom. From Jeff Campagna:  I am a Canadian journalist and I run Istmo Customs down on the Pacific beaches of Panama’s rural interior.  I’d be honored if you guys would consider featuring my latest custom Suzuki GN125.

It’s no masterpiece, but it’s pretty badass for a small displacement bike. I bought it used and abused off a courier company in downtown Panama City. GN125’s are insanely popular here in Panama, but I don’t know that any Panamanians would ever imagine a gringo rebuilding them. Which is a shame really, cause they have great bones.

Anyways, the engine was totally rebuilt, the frame was de-tabbed, a rear hoop was added and it was re-coated. Relocated ignition. Seat is made from fine Argentine leather. Clip-ons with coke bottle grips. Raw metal tank. Loud as hell wrapped open header, cause why not. Imported knobby tires for beach ripping. New performance rear suspension. It’s a seriously fun ride. I was living in Panama for seven years running Istmo Customs near the end, but have just moved back to Canada where I’ll be continuing to build bigger and better bikes. I’ve got a minter than mint CB550 that I’m chomping at the bit to personalize.