This Kawasaki KZ750 (twin) cafe racer looks like it was built by a professional shop, complete with years of experience and a wealth of tools and a near limitless budget.

This bike, incredibly, is the first motorcycle restoration attempt by garage-builder Shad Alexander of Hartselle, Alabama. He did every bit of work himself, from shaping the fiberglass underbelly and fender to truing and lacing his own rims–a skill he learned for this project. He and his father even built a paint booth in the garage. The bike went on to win the “People’s Choice” award at Ace Corner during the 12th Annual Barber Vintage Fest, Talk about auspicious beginnings! Below, Shad gives us the full story on this staggering, sexy-as-hell KZ. (Words by Shad Alexander. Highlights by us.)

My name is Shad Alexander, 44 years old years old and live in from Hartselle, Alabama. This build was my first attempt at restoring a motorcycle–also the first time I have every owned a vintage bike.

I had no idea what kind of bike I wanted, so i bought the first bike I found that a local bike shop had. The customer had a shop bill for $280 and never came back to pick it up, so the shop owner let me have it for $280. This bike was missing several key parts and was not running or even close to being street worthy. If I had known how hard it would be to find 750 twin parts, I would not have bought this bike. I’m a huge MotoGP and Superbike racing fan, so I new I wanted to build a bike that had an aggressive stance with a mono shock, disc brakes all the way around and some kind of underbelly like the vintage race bikes. I bought this bike in December and i figured i could get it finished in 6 months and be ready for summer riding. Boy was i wrong, it ended up taking me 14 months to complete. The most challenging part of the build was making the underbelly. The underbelly I made from scratch out of fiberglass and it took me 6 weeks to complete. I couldn’t find a rear fender that fit as snug as i wanted so i built that out of fiberglass also; the fender is slotted so i can slide it with the tire when I adjust the chain.

To get the stance I wanted, I had to lower the front of the gas tank 3/4″ and I raised the rear of the tank 3″ and then built the rear tail section off of that line. I did a complete rebuild on the motor, honed the cylinders and put new rings in, valve job, new bearings and new gasket kit. The bike came with a single front disc and a drum on the rear and spoke wheels. I converted it over to disc all the way around, drilled out the 3 rotors that where solid. I changed to 36 wire spoke wheels using hubs from a KZ650 and had all new bearings installed. I bought a wheel truing stand and learned to lace, true and balance my own rims. All 3 calipers I rebuilt with new pistons and new seal kits and I had custom stainless steel brake lines made.

Carburetors were rebuilt with new carb kits and re-jetted for the new Cone Engineering exhaust mufflers and K&N pod filters. The electrical system is a complete rebuild with all new components, including all new wiring, coil, Motogadget M-Unit and an Anti-Gravity lithium battery. The rear shock is off a 2013 Kawasaki ZX10R with a new RaceTec spring; rear sets and rear master cylinder is off a 2006 Yamaha R6 with custom built linkage and the front master cylinder is off a 2013 Suzuki GSXR 600. Handlebar controls/switches are Motogadget mini’s. The motor was vapor honed and I painted it with VHT Satin black and oven-baked; fins were hand-sanded. I bought a 1 HP buffer from Eastwood and learned to polish aluminum. I buffed all the side covers, kickstand, kick starter and every bolt and nut. I did all the body work and paint, l filled in all the welds on the frame and sanded them smooth.

My Dad and I built a paint booth in a stall of his garage and i painted every part, frame, tank and fenders. All the black paint is high gloss enamel and all the Red is base coat, clear coat. Red is from a 2016 Porsche 911. My first time wet sanding clear coat, I had to redo a few parts a couple of times, but eventually it turned out perfect. 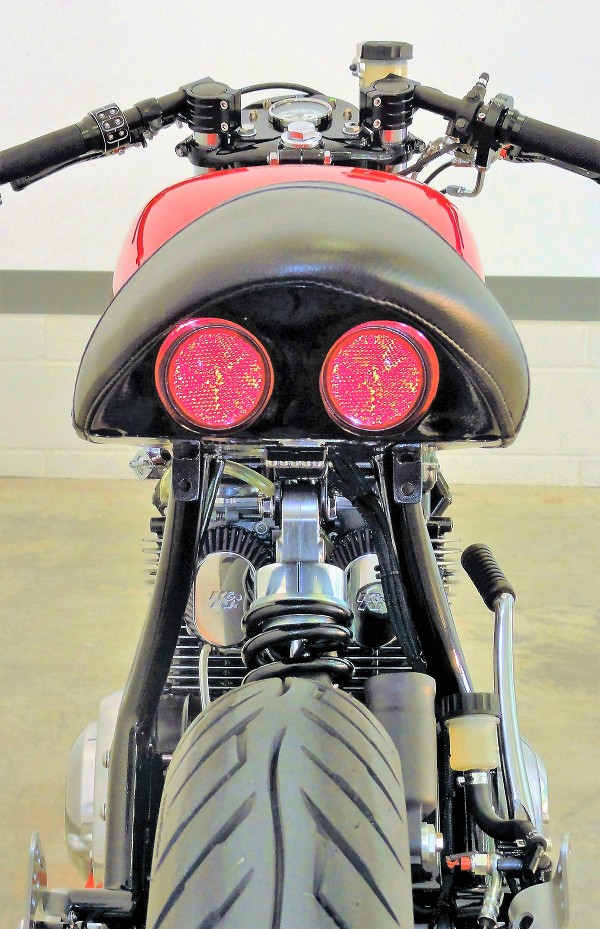 All in all, i did every bit of the work myself. The bike handles surprising great, very light and nimble. The motor has enough torque to make it fun to rip up and down the road and do a TON. I recently took the bike to the 12th Annual Barber’s Vintage Bike Festival in Birmingham, Alabama and enter my bike in the Ace Cafe bike show and won “The Peoples Choice” Award. I learned a lot and now I’m looking forward to building a few more bikes.