Here at BikeBound, we have a special place in our hearts for the Honda XR200. My father and I owned a pair of them in the nineties, which we took to every borrow pit and trail system we could find. In general, the Honda XR has proven itself one of the toughest, most adaptable platforms ever created. Now it’s great to see so many of these bikes being resurrected as custom scramblers and trackers. 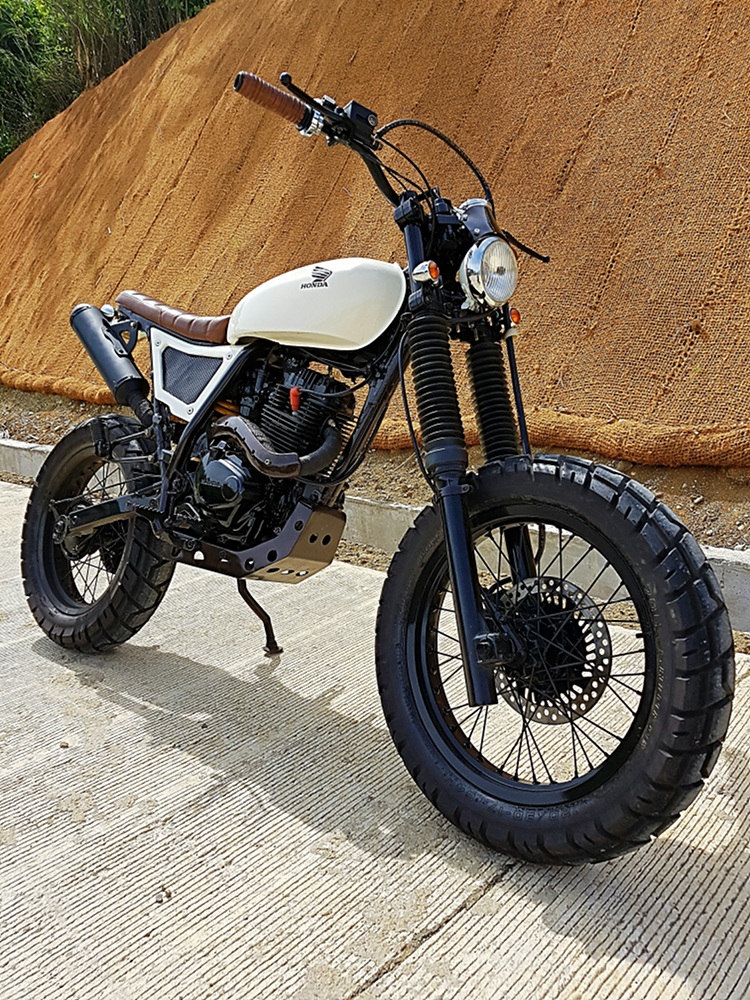 This XR200 scrambler, built by 3B Customs of Surigao City, Philippines, was built for professional surfer Luke Landrigan, a huge moto enthusiast. The “3B” in 3B Customs stands for Bikes Builds Bonds — now that’s a name that says it all. Though 3B Customs is located far from the capital city of Manila, where many of the known bike builders call home, they are quickly building a name for themselves with incredible customs like this one. Below, Benjo Sun of 3B Customs gives us the full story on the builder, the client, and the bike born of their collaboration.

About the Builder:  3B Customs (Words by Benjo Sun. Highlights by us.)

We are from Surigao City, Philippines. It’s a quite sleepy city way down south from the country’s capital of Manila. It’s a little-known backyard garage called 3B Customs, so small in fact that even some locals in Surigao don’t know the shop actually exists in their area. Although we have been gaining quite a following in the last year since we started 3 years ago, and we already have a loyal fan base. We still are not that mainstream compared to the underbone and scooter scene in the area. We first garnered the limelight 1 and half years ago after being featured on one of the Philippines custom motorcycle websites specifically focusing on cafe racers, scrambler, brat, trackers and the likes. After that, most of the clientele is not from Surigao but from the neighboring provinces, like Siargao island, Butuan, Leyte and even from way across the capital Manila where most of the known bike builders are based. 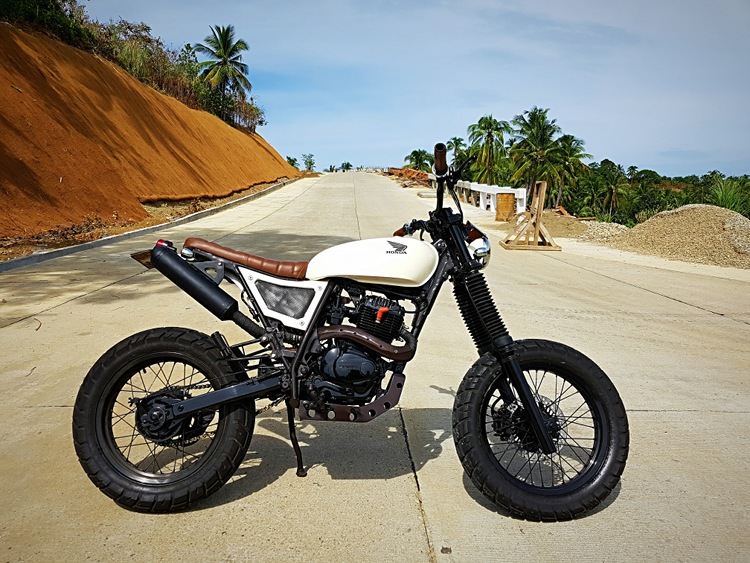 The man behind the shop is me, Benjo Sun.  I mostly do the conceptualizing, designing, sketching, small fabrications, and paint. Since the company is steadily growing I am now getting hired help, professionals in their own field. To give the company an added edge to be able to compete with the rest of the country. Since we are located in the province we do with what we can with what we have. As they say, necessity is the mother of invention. What we can’t buy we have it fabricated.

About the Client:  Luke Landrigan 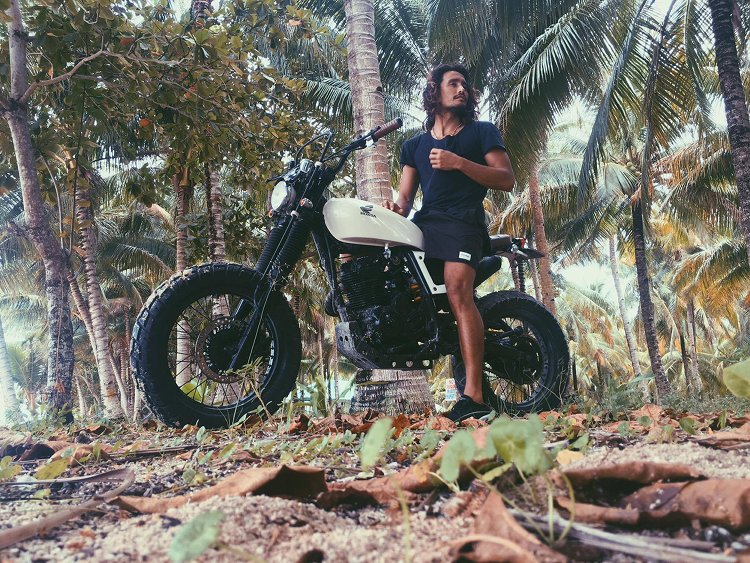 The client is Mr. Luke Landrigan — a professional surfer, surf instructor, entrepreneur, and moto enthusiast from the Northern part of the country, La Union, Philippines. He started surfing at a young age and has been winning competitions ever since. He then turned his sights on building a surf resort, then now a mex-tex resto as well. When he’s not working you can bet he is off to carve up some waves. Sometimes he travels to the other parts of the country looking for that perfect wave. 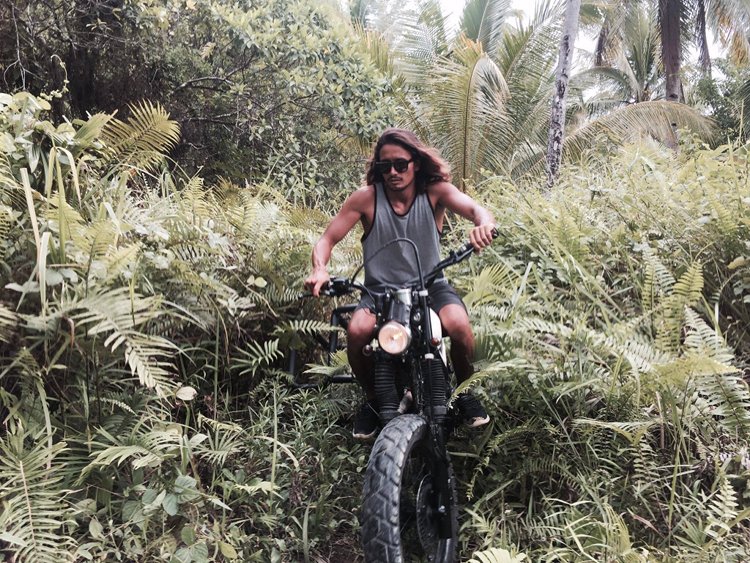 His relationship with motorbikes started when he was young, as his father had a motorbike which was their primary means of transportation. And at the age of 18 his dad bought him his first scooter. That was the time where it all started, he was bitten by the bike bug. Just a few months before his recent trip to Siargao island (considered as the surfing capital of the Philippines), he wanted to have a bike there to travel around the island, going from surf spot to surf spot, and even on to the more secluded ones. He already have a bike in mind and was able to get his hands on one from his friend in Siargao Island. The bike was a Honda XR200 which was locally available. It’s a considered as a go-anywhere bike, a bike you can ride on cemented/paved roads, dirt roads, and even sand. Although he already had the bike, it needed to be fixed and to have a much needed make over to be able to handle the specific challenges it was about to face and also to suit the owner’s personality. One day while I was working on a bike my phone rang, my hand were all greasy at the time so I wasn’t able to answer the call, it was then followed by a text message saying: Bro good day this is Luke Landrigan. You busy? Can I call? Or something like that. I can’t actually remember word for word. So I called him back. We talked and he said he’s interested in having a bike built, he had a Honda XR200 in Siargao Island for me to work on to be turned into a scrambler. Said he wanted it in white, with brown leather seats and with burly tyres. Said he wanted to it able to use it on paved roads, dirt and even sand. So I went on to send him some designs and eventually settled on a design, though along the way I did some last minute alterations to better suit the flow of the bike design. The base bike is a 2000s Honda XR 200. When I got the bike, first thing I noticed was the lights front and rear, as well turn signals and horn were not working, speedo is busted, front suspension was shut, the rear mono suspension was not the right one for the bike — it was installed with a modified mono shock from a Suzuki underbone bike, which was also shut as well, needless to say the bike I got was bouncy as hell. During the teardown process I noticed the headlight bracket was really rusted and rotted, some part of the frame was also rusted, luckily it was just in the rearmost part of the frame which was to be chopped. The engine was the opposite though; it had potential. It was still in good running condition just needed some tuning. And the bike came with an aftermarket free flow exhaust. First thing I did was change the rims and spokes, and changed to beefier dual sport tires. Changed the rear mono shock and fixed the front forks. Once I got the stance I wanted, I proceeded with chopping the rear frame. Made custom rear fender, custom side panels and custom gas tank. Changed the handle bars, front and rear lights, as well as the turn signals, change the handlebar left switches and throttle assembly, made a custom headlight visor to house the speedometer. Changed to a heavy duty gold chain, made a custom heavy duty engine guard / skid plate, made a custom seat pan and re upholstered it and like most of my other builds it comes with a custom hand sewn leather grips to match the seat. Also made a custom detachable surfboard rack which was also custom leather wrapped and hand sewn. Overall the bike build turned out the way I wanted it to be. And I can tell that the client was pleased with the build because when he first saw the bike in person he changed his mind from just a bike for Siargao Island to “I’ll bring it back home with me to La Union!”