There is nothing we love more than a killer garage-build. This KZ400 scrambler is exactly that, built by Nick Petterson of Milwaukee’s Moto-fied Cycles. This is Nick’s first build, and it’s an auspicious start. Instead of treading over old ground with a CB750 or XS650, Nick decided to take on a challenge:

Early advertisements of the KZ400 promoted the bike’s fuel efficiency, pitting the bike against a VW Beetle with the tagline:  Think even smaller.  Not exactly what you would think of as aggressive, compared to older siblings like the KZ650 and mighty KZ1000. Of course, Moto-fied changed all that, building The Brown Bomber:  a mean, mud-colored little ripper we would kill to ride. Best of all? Total budget, including bike, was only $1300! 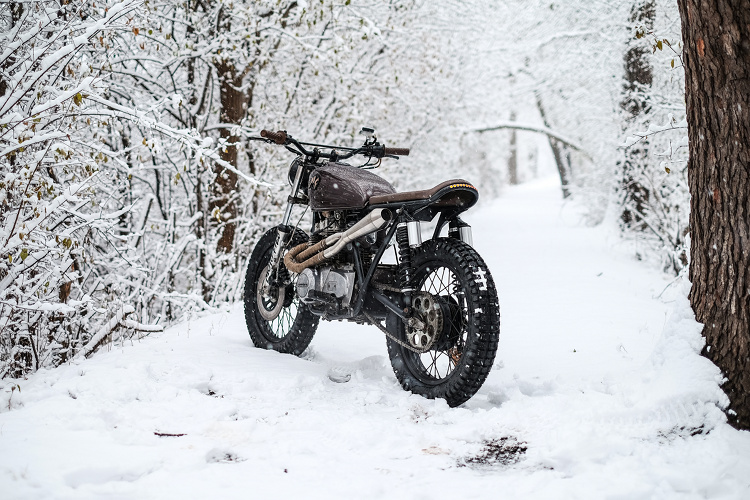 Below, we have the full interview with Nick about the build. 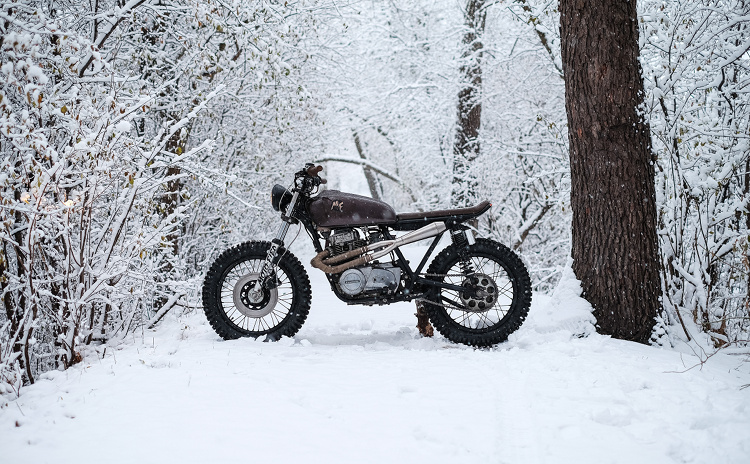 • Please tell us about your history with motorcycles and your workshop.

My name is Nick Petterson, from Milwaukee WI. I am new to the vintage moto scene as this is my first build. I operate out of a quaint, one car garage with plans to build up my business and get into a full functioning shop. I’ve been into motorcycles for roughly three years. The first motorcycle I bought was a 1982 Kz650 CSR. I began to change things on the bike and became friends with many people around the Milwaukee area because of it. Since then I’ve owned more than 20 motorcycles and my lifestyle has drastically changed; now riding, building, mechanics, welding and fabrication are my true passion. Started as my first custom motorcycle build, soon after I started a good friend offered to buy it.

Starting out as a stock bike, I have since built a loop for the tail with a custom integrated taillight, custom seat pan that was upholstered at Milwaukee Cycle Salvage, frame modifications, side pipe exhaust, tank paint, machined headlight bracket, chain slide for the swingarm, battery tray, and a machined bracket for seat pan mounting. -The taillight took a lot of work for it to turn out correctly but I am very pleased with the outcome of my work. The exhaust was another big challenge for me because I have only a handful of welding and fab tools available to me. Altogether, I am proud of this bike because of the things that I’ve learned and the new challenges I’ve encountered while building it. Also, this bike was built for only $1300 including the cost of the bike and parts. Labor not included.