Before opening Tuscany’s Toro Moto, founder Riccardo Micheli worked as an official BMW Motorrad technician for 15 years and crewed in various racing championships, most notably the old 2-stroke 250cc MotoGP class. Finally he struck out on his own, opening Toro Moto, a workshop located in the Tuscan town of Pistoia, Italy. Riccardo specializes in BMW customs, and this 1985 BMW R65 cafe racer is one of his latest. Given his background in racing, it’s no surprise that Riccardo’s attention to detail is nothing short of maniacal, resulting in an 860cc boxer with 16 ignition mappings, Bluetooth and smart phone integration, tuned Wilbers suspension, hand-beaten aluminum bodywork, and a paint scheme that recalls the BMW R90S.

Many thanks to Sergio Giordano of Italian Dream Motorcycle for introducing us to Riccardo’s work! Riccardo Micheli, the owner and founder of Toro Moto, worked for BMW Motorrad for 15 years as a mechanic and chief, and is also experienced in the racing world. He worked in Moto2 when it was still 250cc! Then he opened his workshop, Toro Moto, specializing in BMW. The request of the client is a vintage motorcycle but eclectic and with significant mechanical modifications to increase the performance of the bike.

The customer came in without a project, but lots of pictures from the web. The feeling with the client — it’s important for my job. My target is to make the bike for my customer like the tailor sews the suit on his client.

My style is try to make a motorcycle if time has stopped, blending vintage, high technology, and radical fabrication. All this with a maniacal attention to the details.

The idea is to use a vintage motorcycle but to increase the performance of the bike. For this, I started with the engine, increasing the 650cc to 860cc, and at the same time, I started to imagine the eclectic colors for the bike.

The mechanics, the electronics and the custom work on this motorcycle — they are numerous and lot of this are amazing. We continue from the engine:

The imposing black-painted Boxer in contrast-cut style has been completely redone with a larger 860cc capacity. The heads have been modified by making a double ignition with flushed ducts, and an advance control unit with 16 mappings. 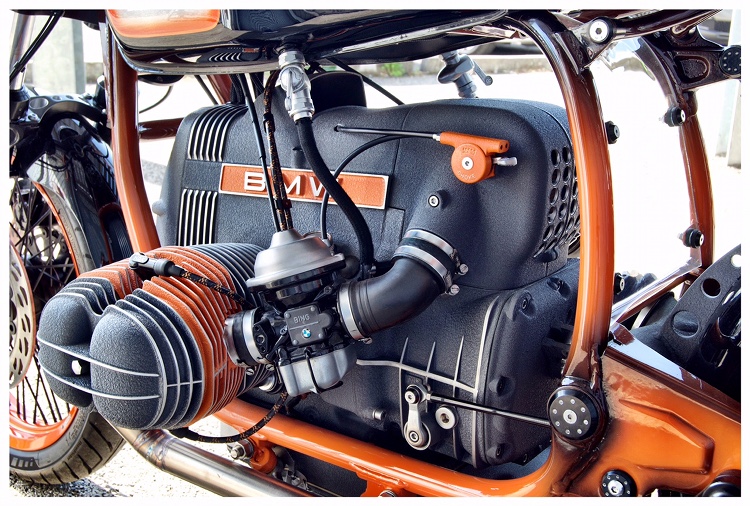 The front crankcases and the entire intake part have been re-adapted by some pieces taken from an earlier model /5 bike. The original carburetors are completely painted and overhauled: pins, jets and air brakes all set ad hoc.

A sheet of fiber that lights up by refraction highlighting the workshop logo, separates the final part of the engine block with the rear part of the bike, whose frame has been entirely rebuilt. This is the first model the /3 on which BMW decides to experiment with the single arm. Here a dedicated Wilbers suspension has been mounted and a hub made from solid that holds a dedicated spoked rim of excellent workmanship. Also on the mono is mounted the holder plate equipped with approved direction indicators and LED stops. All bodywork superstructures, tail, fenders and domes, together with the battery box, are hand-beaten aluminum. The fiber saddle opens electronically, unveiling a large glove box that occupies the entire tail of the bike. From the stock tank closed by a cap made on the CNC, the gasoline passes through aeronautical tubes, regulated by the chromed and satinized taps taken from the historical model 51/5. All the electrical system is made ad hoc with a control unit with Bluetooth connection and dedicated app to be managed with your smart phone. The front forks have been completely redone and reduced by 6 centimeters, to have a 13 centimeter excursion like the road racing bikes. The fork caps with spring preload are made from solid. The Brembo braking system closes the double artisan discs also made in contrast. The plates are made from solid, while the handlebars are made by hand. On these are the Beringer handlebar controls, and the MotoGadget electronic controls such as the instrumentation and the M-lock ignition sensor. The Fanale is completely LED and the position lights made by hand. All this ends up in the single dedicated double discharges by HP Corse, who also made the CNC platforms. We left the first striking thing about this bike to last, and it is remarkable for its effect and balance at the same time, as the customer wanted. Its coloring. It comes from a breakdown of the historical colors of the 90 RS model — the rims are anodized orange like the fork caps, the details of the single shock absorber and the brake and clutch levers. The tank like the tail are black with orange-shaded frames that reveal the aluminum core of the components. Also the aeronautical tubes are in degrade ‘like the frame in shades of orange and black. I’m really proud for the bike, because it’s original and also for the absolutely usable gadgetry. To finish my mission, the customer was really happy with the results of the bike.  It was presented in Verona three months ago and then last weekend won Best in Show in the motor expo in Pisa, Tuscany. Next competition is at “Biker Fest” ( biggerstoutdoor show in Italy) on the road of Colonia.