“The Brawler” from Holland…

We see a lot of Honda NX650 customs these days, but we’ve never one that looked like “The Brawler.” Not surprisingly, the bike is the work of Michel Szozda of Cool Kid Customs — located in Haarlem, near Amsterdam. The Dutch builder has quickly made a name from himself with bright, burly builds that defy classification. In this case, the customer gave Michel the freedom to do whatever he liked with the build — the only input was the base color of the paint. The result is the zebra-camo urban enduro you see here, sure to turn heads as it jumps curbs in Amsterdam and beyond. Below, we get the full story on this NX650 tracker/scrambler. My name is Michel Szozda from The Netherlands. I started Cool Kid Customs motorcycle shop in 2014 and we’re stationed in Haarlem near Amsterdam.

It was build for a customer who gave me the freedom to do whatever I like to do.

I wanted to keep it as clean and compact as possible. Just a frame, wheels, and an engine. The customer gave me a color he liked and I used it as the base color. All the other things I freestyle as the bike gets built up again. I started off with the back of the frame, cut in half a welded a whole new tailsection.
Took an old motor morini fuel tank I had and made it fit the frame.
Welded a stainless steel 2-in-1 exhaust that goes underneath the frame.
Handmade the LED headlight/numberplate and added a airvent for extra style points.
Small little LED tailight inserted in the tail of the frame.
Did not like the wheels on the bike so i swapped the front 21″ for a 19″.
Seat was done by mister Silvermachine in Amsterdam.
Powdercoated all the parts and handpainted the fuel tank with a Urban zebra camo print. I love how the front end and the exhaust turned out, I also like the seat and the gas tank, heck I like the whole bike. 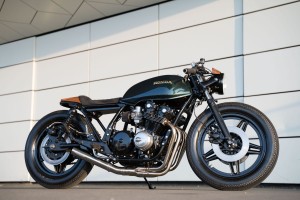 Black Forest: 1980 Honda CB750F Bol d’Or - In 1969, Honda released the CB750, which was destined to become a landmark in motorcycling history. However, Honda has never been a company to rest on their laurels, and by the mid 1970s, they were […] Cafe Killer: Suzuki GSX-R750 by Cool Kid Customs - “Neo Tokyo” — an Akira-inspired slabside GSX-R… In 1985, Suzuki introduced the original GSX-R750, an aluminum-framed racebike for the street — a bike that would serve as the grandfather of all Japanese super sports to […]