The BMW R1100R was a naked version of the modern Bavarian boxer. While fairing-less design showcased the considerable engineering of the machine — oil coolers, telelever front end, fuel injection — the bike was never much of a looker. Enter Jason Lisica of Offset Motorcycles, who had never worked on a fuel-injected bike — much less a BMW — until this build. The geometry of the R1100R doesn’t lend itself to a cafe-style build, so Jason opted for a “muscle brat” style. The process was challenging and time-consuming — he spent more than 25 hours on just the tank — but ultimately rewarding, as Jason learned a lot about working with sheet metal and accrued a few new tools.

Below, we get the full story on this BMW muscle bike! Offset Motorcycles is a solo operation, with a network of specialized shops behind me. In any industry it’s important to have friends that know what they’re doing. It takes a long time to develop those relationships. For me, it’s been almost 35 years that I’ve been wrenching on bikes from the 1970’s, so this year’s pursuits have taken me more into areas that I’ve never been exposed to. Having customers with specific needs, and taking the opportunity to buy new tools really helps move things along. This particular build was very challenging and time consuming. I ended up learning quite a bit about working sheet metal. I have the confidence to build really cool things now just tacking wire frames, and pounding 18 gauge sheet on a bag of sand. I wouldn’t have even thought of doing that before this build came along. This one started life as a clapped out commuter 2001 BMW R1100R, probably one of the ugliest bikes out there. In stock form it just screams grumpy old man. The worst part is the big tumor of a gas tank. So I told my client that if I took the bike in, I’d be doing a new tank. He didn’t have much of a choice about that. I got a referral from a client named Kingston, for whom I built a GL500 brat. He told me about another one of his friends that had a project gone stale. I had never worked on a BMW, nor a fuel injected bike, before this came along, but an empty lift is an empty soul. So, I took it, even though every bone in my body kept telling me to drive away with an empty truck. My client Keith always had the idea that it was going to be a cafe racer, but the geometry of this bike makes that really difficult. There are some out there, but if you have a look, the bars always make their way above the top triple clamp. So I had decided early on to do a muscle-brat. Kind of the same thing I did to his friend’s GL build. I think high-mounted drag bars are really cool to hold onto, and the brat style lends itself to that riding position. 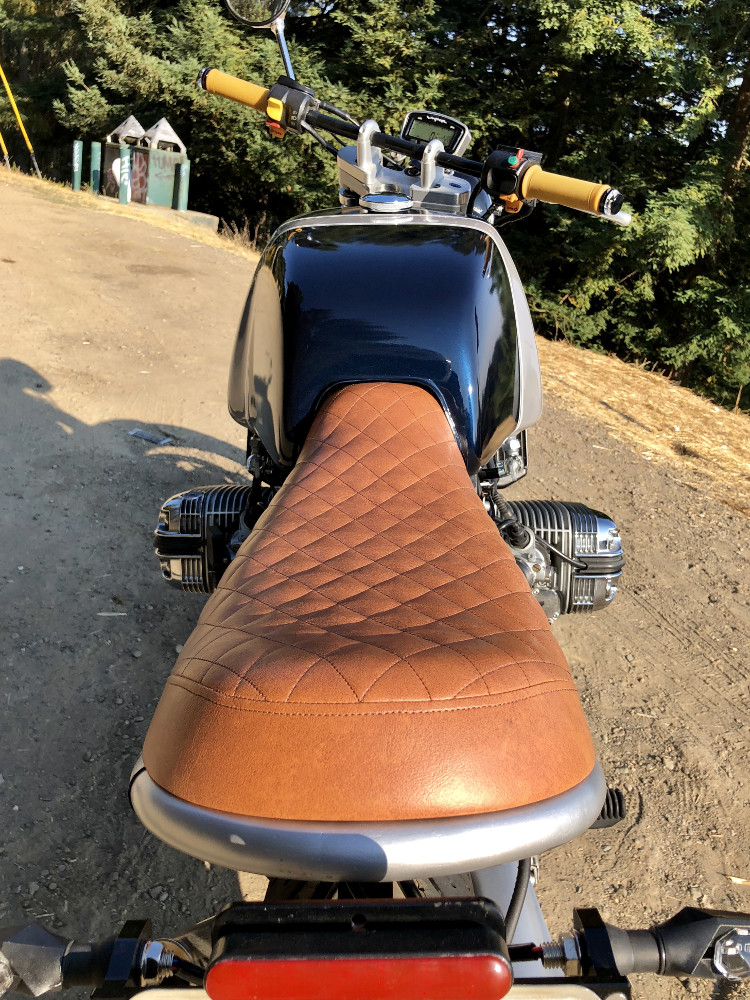 OMG the tank was so much work. 25+ hours into that thing, to make it right. The donor is from a late 70’s – early 80’s R100RT. I chose that donor because of the classic lines and its one of the bigger air-head tanks. The biggest challenge was trying to figure out how to stuff the computer under it, and the fuel pump inside of it. It was about 10 seconds of comparing the tanks when I knew I was in trouble. I called Keith and told him that I was going to have to destroy both tanks, about $1000 in of parts, just to get an idea if I could franken-weld them together. So I cut the tunnel out of the R1100R tank and the top off the RT and found out that they could be welded together, but with lots of sheet metal fab. The good thing is that the tunnel would include all the original spacing underneath, and the fuel pump. I dove right into it, and cut all the little pieces to make them fit together, and began TIG-brazing. That was a new process for me. You can YouTube it to find out about it, but it’s much lower temperature, and more flexible than welding. Perfect for gas tanks. After that I added a Harley style screw in fuel bung, and sealed the whole thing up with RedKote. The exhaust was something new for me as well. I tacked it together from 90 and 45 degree bends from the auto parts store, then took that form to an exhaust shop with instructions to duplicate it with thick wall. Lossa Engineering stubby can for the win. The Trail Tech Vapor was a no brainer, they always look so nice with the optional aluminum mount. The hoop was a challenge. Being that nobody makes one I had to bend that myself with a torch. After that it was just get a big ol’ sheet of 16ga, bend it over my knee, and voila… a seat pan. OCC Cafe Racer in LA did the upholstery and totally nailed the look my client was going after. Muscle Brat. It’s a bully. 1100cc is no joke. The drag bars help that effect too. 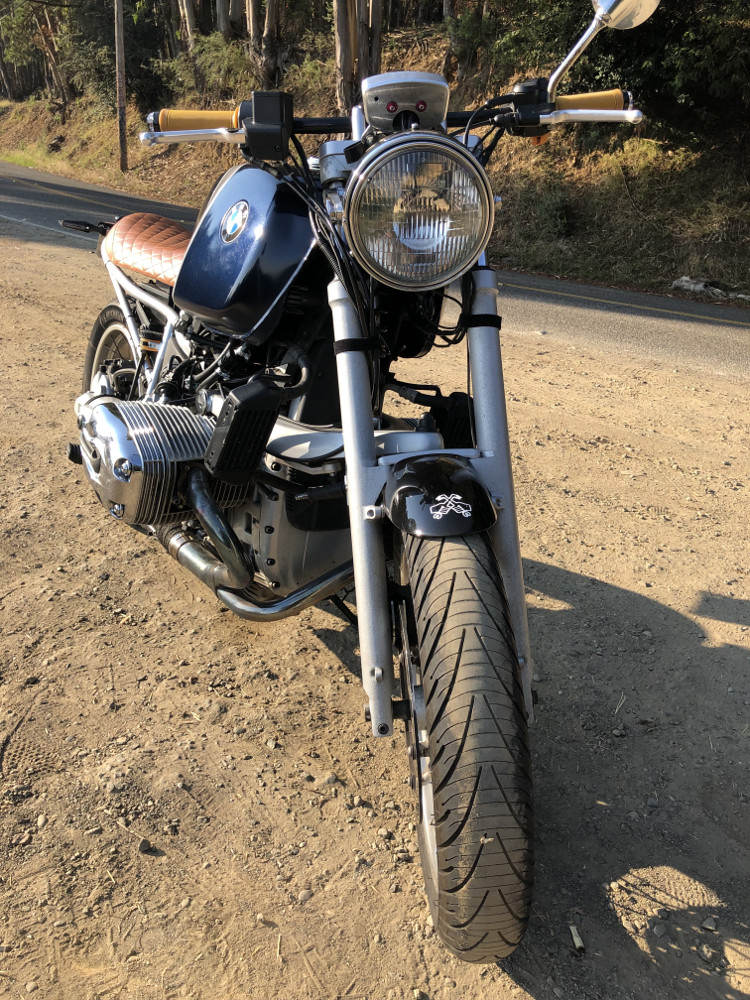 Obviously the tank. It really was a stretch to make that work, and it took a village of knowledge to get it done. I could not have done it alone.