Said James, “In my opinion, there’s nothing in this world
Beats a ’52 Vincent and a Redheaded girl.
Now Nortons and Indians and Beezers won’t do.
Oh, they don’t have a Soul like a Vincent ’52.”
–Richard Thompson 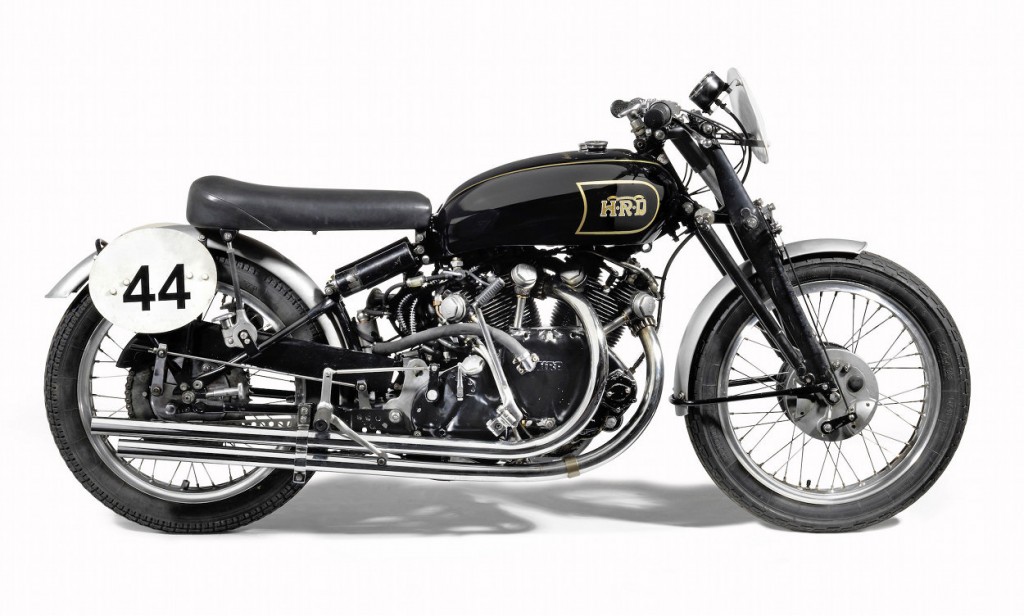 At the time of its introduction in 1948, the Vincent Black Lightning was the fastest production motorcycle in the world, capable of achieving 150 mph through its 70-hp, 998cc V-twin engine.  Only 31 Black Lightnings were ever built, and only 19 matching-numbers examples still exist. This weekend, during the Vintage Festival at the Barber Motorsports Museum in Birmingham, Alabama, one of these ultra-rare legends will go on the Bonhams auction block. It’s the second Black Lightning ever built, expected to bring $400-500,000.

Bid Here on this 1949 Black Lightning

Earlier in the year, a Black Lightning that Jack Ehrets rode to an Australian land speed record sold for £657,652…nearly $1,000,000! Below, we take a look at the story of his iconic machine.

Vincent-HRD developed the Black Lightning directly from the Vincent Black Shadow, which was an evolution of the V-twin Vincent Rapide. Founder Philip Conrad Vincent felt that steady performance improvement was crucial to the company. When the managing director refused to authorize development of the Black Shadow, a pair of engineers built the bikes in secret. One of those engineers was Phil Irving, who developed the air-cooled, OHV, 50° V-twin used in the Rapide, Black Shadow, and Black Lightning. Says Silodrome:

“Long before his Formula 1 glory days, Irving was working at Vincent-HRD on a replacement for the single cylinder, 500cc Vincent Comet engine. As the story goes, two Comet blueprints were overlapping on his desk in a rough approximation of a V-twin, and Irving had a eureka moment. There’s no hard evidence for this tale, but one should never let the truth get in the way of a good story.” The Black Shadow boasted a 50-hp version of the company’s 998cc V-twin, with a top speed of 125 mph. The bike had a signature black-enameled engine, achieved through the application of Pinchin & Johnson enamel over a “pyluminising” coat of chromate anti-corrosion primer. Said the legendary Hunter S. Thompson of the machine:

“If you rode the Black Shadow at top speed for any length of time, you would almost certainly die. That is why there are not many life members of the Vincent Black Shadow Society.”

In 1948, at the Bonneville Salt Flats, Rollie Free hit a record average speed of 150.313 mph on a factory-tuned Series-B Black Shadow, capturing the title as the “Fastest Production Motorcycles in the World.” For the record-breaking run, Free stripped down to his bathing suit and lay prone on the bike, resulting in one of the most iconic photographs in motorcycling history. It was the first time that a non-supercharged motorcycle had broken the 150 mph barrier. Free’s bike was owned by journalist John Edgar and factory-prepped to reach such speeds. Almost immediately, Vincent decided to produce and market a race-trim motorcycle of similar specification to Free’s record-setting machine: the Vincent Black Lightning. The 998cc V-twin in the Black Lightning engine boasted 70 horsepower, thanks to heavier-duty connecting rods, bigger inlet ports, polished rocker gear, racing carbs, manual advance magneto, and a higher compression ratio. In addition, the bike weighed nearly 90 pounds less than the Black Shadow, thanks to magnesium components, alloy rims, rear-set foot controls, a solo seat, and aluminum fenders. The 150-mph Black Lightning was supplied in race trim, though the bikes could be registered as street-legal with some modification. In 1950, Rollie Free returned to Bonneville and broke his own record, achieving 156.58 mph on a Vincent-HRD Black Lightning. The Vincent Black Lightning for sale / auction through Bonhams is a 1949 Vincent 998cc Black Lightning Series-B. It was the second-ever Black Lightning ever built, ordered for and raced by Swiss racer Hans Stärkle.  It’s had five owners and been with the present owner for 50 years. It has matching numbers, never been in an accident, and was restored between 2000 and 2005. Speed is Expensive is a documentary currently in pre-production about the history of Vincent Motorcycles. The film, which is directed by David Lancaster, features the likes of Jay Leno, John Surtees, and Paul Simonon. We’re thrilled to see this story of the rise and fall of the legendary motorbike company, and we encourage you to keep your eye out for the film!