“The Scrambled Duke”: An alternative to the “new” Ducati Scrambler…

Long before they revived the name for the modern L-twin Scrambler in 2015, Ducati produced their original “Scrambler” series of air-cooled singles in 125, 250, 350, and 450 cc displacements. Introduced in 1962, these bikes were built at the behest of the American importer, who wanted a lightweight all-purpose bike to appeal to young people. Says one rider who’s owned his 450 Scrambler since 1971:

“I could go on dirt roads and trails, twisties and longer adventures. With typical Ducati handling, light weight, plenty of midrange torque and a smoothshifting, five-speed gearbox, it was really fun to ride.” Enter Wreckless Motorcycles of the United Kingdom, a Pro/Am “tag team” consisting of two friends who’ve known each other for 15 years. Rick Geall is “the Amateur” — he designs, welds, fabricates, and source parts out of his small brick barn, located near Silverstone Race Circuit:

“I went to college to learn to weld and everything else is self-taught and just sheer enthusiasm and man hours.”

Iain Rhodes is “the Pro” — a professional mechanic with his own shop, who does the engine work and final assembly on the builds, and makes sure they run.

The project you see here was triggered by the 2015 revival of the Ducati Scambler name, attached to a bike that many have lamented as being too street-oriented to warrant the name. Says Rick of the build:

“The design brief was to try and retain and enhance the early Scrambler style and feel, but give it a modern 2018 twist. I wanted more ‘scrambler’ rather than the ‘street’ direction Ducati took.” Together, Rick and Iain have managed to tranform a “wide case” 1970 Ducati 350 Scrambler into a modernized stunner — a resto-modded Scrambler that hasn’t lost touch with its roots. We especially love the attitude behind the work:

“There’s no showroom, no celebrity sponsor, no TV show, no glamour. We do it because we love it and because we can (but also, like an addiction, it’s hard to give it up!). Money and prestige in very short supply but the Scrambled Duke sits in my living room at home at the moment and it seems like reward enough.”

Indeed, indeed. Below, we get the full story on the build, along with some stunning shots from photographer Daniel du Cros at the studios of Junction Eleven.

“The Scrambled Duke”: In the Builder’s Words The idea for the Scrambler build was triggered by two things – Ducati’s re-launch of the “new” Scrambler in 2015, and also the timing of acquiring an original 1970’s bike in late 2016.

The bike started life as a black and yellow 350 imported into the UK many years ago from South Africa. It was a running bike but a little tired and unloved, but a period correct Ducati, virtually original from the factory.

Like many bike (and car) producers, some of their most evocative machines came out of the late 60’s and early 70’s, a great period in design generally but especially automotive design.

The design brief was to try and retain and enhance the early Scrambler style and feel (with more than a nod to the Ducati 400/450 RT, which I believe was mainly a US export version), but give it a modern 2018 twist. I wanted more “scrambler” rather than the “street” direction Ducati took. I still hope Ducati will do an MX style bike at some point, but I guess it is a big and already crowded market of very fine bikes. To recreate that 70’s Scrambler look, stance would be challenge no. 1 — get it sitting a lot higher and recreating an MX style, making it a little more extreme, ultimately a caricature of the original which is really our style.

Given the original motor had a slightly wheezy but fun 24 horsepower, clearly some weight saving wouldn’t go amiss, achieved broadly by losing the original forks, wheels and exhaust that were very heavy items. Styling, overall, was to remain vintage, so a retained but modified frame, hand-made aluminium panels all round, the original tank and a completely refreshed, re-bored, rebuilt, original motor were all to be a focal point for the build. Modern components, designed for the KTM SX small bike range (65 and 85) became the backbone of the significant modifications. We added a set of unique billet triple clamps from Fastec Racing in the UK (that caused Danny a few headaches and head scratching when he realised what I was asking for). We went to Fastec as they already produced a very nice aftermarket clamp set for the KTM SX range so figured we were halfway there!? The brief was to machine them to retain the existing 1970 Scrambler head geometry but be able to take the KTM SX WP’s up front — this set the taller stance we wanted. This was balanced at the back via some lengthy Ohlins twin shocks at the rear (370mm eye to eye), modified, assembled and supplied by Ben at BG Motorsport Silverstone. We lengthened the swingarm as well, just to give it a more stretched out look, less compact.

Brand-new SM Pro Platinum wheels designed for KTM application completed the look while up front along with Beringer’s very pretty full MX front braking kit for the KTM SX series, putting the stopping power on the nose (literally). Thanks to Christophe and the team at Bike Design in Belgium as ever for sourcing the Beringer components we needed.

We debated long and hard about whether to run a rear brake, but I wanted to keep the styling nice and clean at the rear, and show off the oversized rear hand machined one-off sprocket from a 49T Renthal blank. The usual array of goodies from Renthal, Rizoma and Daytona all add the finishing touches. A brand new seat pan was fabricated in house and covered in a mix of soft black leather with a perforated and stitched seating area from Matt at Herbert Ellison Upholstery in Stockbridge. Paint was chosen to give a vintage feel, with a nod towards the yellow and orange hues used by Ducati in the 70’s.

That carb’d single sounds nasty via the brand new hand-built exhaust mated to a modern Akrapovic end can designed for the current Yamaha R3. I’m not sure how you’d categorise the bike, so lets just say it’s a Scrambler, a nod to the original icon and its very cool MX cousin, the 400 RT, whilst celebrating what’s best in modern on road/off road components.

The overall build meandered over an 18-month period, mainly because the eventual build no.1 (Kawasaki W650 – sixfiveoh) took over the build slot and focus during a lull in proceedings on the Scrambler. The real timetable was more like 30 weeks to do this particular bike. Getting the triple clamps machined took time, as did sourcing the genuine 70’s parts for the motor, piston, carb etc. (a big thanks to Barry at Classic Ducati for his patience and support in finding me the things I needed – I’m not 100% sure he’ll like what I did with it all but that’s custom, you won’t please everyone). The benefit of using the modern parts designed for KTM was helpful from a sourcing point of view, but getting it all to marry with the frame presented lots of fitment challenges that Iain skillfully (as usual) mastered.

The lack of rear brake might make this an MOT challenge ultimately if a buyer comes along for it, so perhaps we will revisit this in good time, but for now, the combination of the vintage range Heidenau K67 Trials tyres and those Beringer stoppers make it a hoot to ride.

The tank, fenders and panels were painted a combination of Traffic Black in gloss and Traffic Yellow in gloss. Inset Wreckless logos on the tank and Wreckless logo and bespoke design decals for the side panels. Frame and swingarm were powder coated Traffic Black. 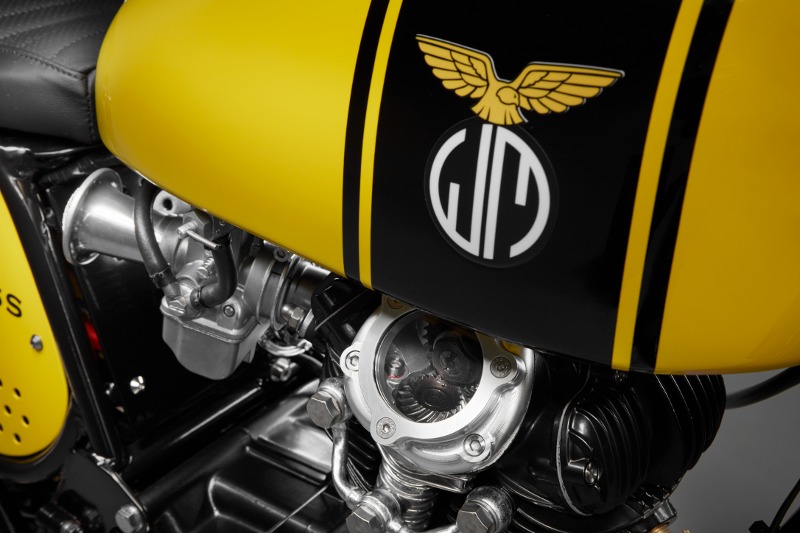 The photo-shoot took place locally in Banbury at the studios of junctioneleven, the stills taken by the highly talented Daniel Du Cros.