The Honda Transalp was launched back in 1987 with the original Honda XL600V — a two-wheeled multitool of a machine boasting a 52-degree V-twin that made 50-55 hp. Styled after the Paris-Dakar racers of the ’80s, these desert bombers have become an exotic rarity here in the States, where they were only available 1989-91. Says Motorcycle Classics:

“The Transalp was good at just about anything you threw at it and is still a great, practical, do-it-all motorcycle.” Enter Leonidas Panagiotopoulos of Greece’s Rusty Pipes Garage, who began his customizing career at the tender age of 14, overhauling his father’s ’78 Suzuki A50. After completing his military service, he studied mechatronics — a multidisciplinary branch of engineering that focuses on both electrical and mechanical systems. For the last four years, he’s been building bikes professionally. His favorite styles to build are bobbers and Cholos, but when a customer brought him this ’94 Transalp, bored of the bike’s factory design, they decided to transform the V-twin dual-sport into a scrambler. We especially love the custom engine guards and new metal gas tank with old-school gas indicator — the first tank that Leonidas has built from scratch.

Below, we get the full details on the build, as well as some lovely shots from photographer Constantin Panagopoulos (@dinospanag). Hello! My name is Leonidas Panagiotopoulos and I come from Greece. I am 27 years old and during the four last years I customize and build motorcycles professionally. My favorite category is bobbers and Cholos. My first attempt was when I was 14 with my father’s old Suzuki A50 1978. After completing military duties in 2017, I studied mechatronic engineering and started the Rusty Pipes Garage chasing my dream. This is a customer project.

The owner was bored of his bike’s factory design so he decided to bring it to the Garage in order to convert it to Scrambler. 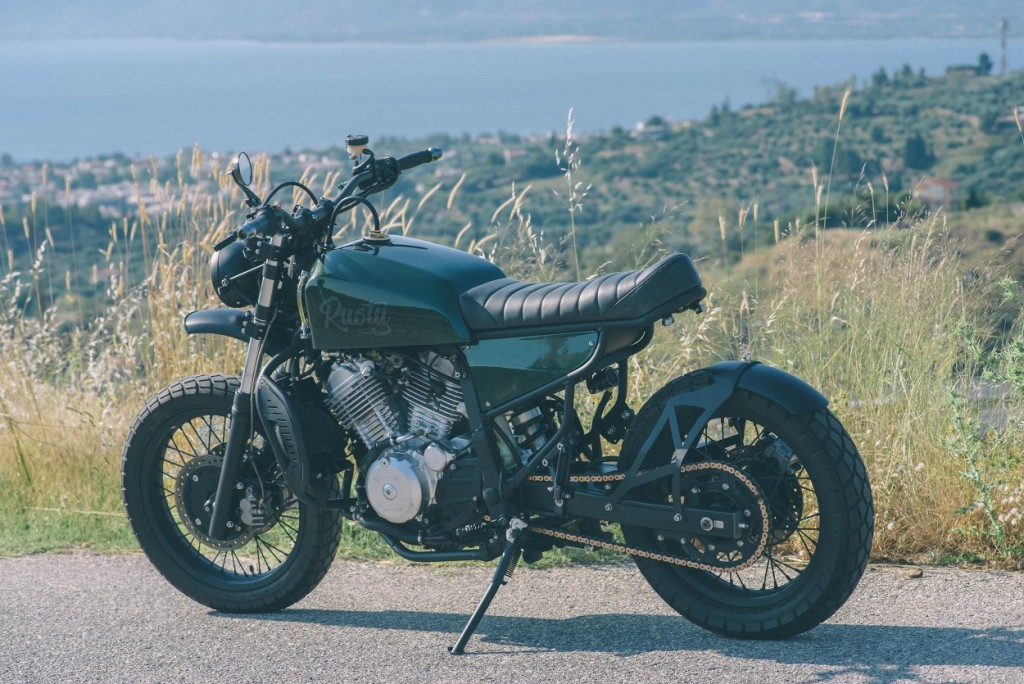 I started by changing the front old 21” rim with a custom-made new 18” one with adapters for the factory disc brakes, put new on/off-road Dunlop tyres and shortened the front fork by 6 cm.

I built old-school side mount brackets for the new headlight, tiny turn signals, and front fender, and adjusted the new GPS speedometer. I also put a new fat-bar handlebar and new risers. I built a new metal gas tank with old-school gas indicator, relocated the radiators, and built custom guard bars to protect them and give the bike a badass look. I removed the factory air case and built new custom metal air intakes with new air filters. The carburetor adjustments have been made by Bike Therapy.

I cut the subframe and built a new one with side covers that contains all the bike’s electrical stuff. The seat is also custom-made by me and ST Covers. There is also a handmade bracket for the rear fender that I put on the swingarm and it is adjustable for the chain settings. The old exhaust is replaced by a new one custom built by Pantelis Exhaust. Most of bike’s parts were powder coated by Troxonet and the frame, engine, gas tank, and side covers are painted by me. It is a Scrambler.

I am pretty proud about the gas tank I built, as it was my first attempt. I also have to say that the result is way better than I expected.