What if Honda made a Scrambler version of the 350 Four?

At its introduction in 1972, the Honda CB350F — aka the 350 Four — was the smallest displacement four-cylinder motorcycle ever produced, offering 34 rwhp at 10,000 rpm and a top speed of just under 100 mph. It many ways, it was like a scaled=down version of the CB750, featuring pistons the size of pill bottles and four 20mm Keihin carburetors. Honda had already introduced the CB500 Four to great acclaim, and the CB350 Four was another step. Says one owner:

“The 1972 release of the 350 Four was almost a natural progression — a statement as to what Honda engineers could do.” Enter Bret Johnson of Northbilt Customs, located on Gasoline Alley in Indianapolis — a hotbed of Indy’s cottage industry in racing:

“Just on this road alone there are shops that supply services, parts, chassis, etc. to IndyCar, NHRA, NASCAR, IMSA, USAC, World of Outlaws and on and on.”

Bret’s grandfather, Dick Northam (the “north” in Northbilt), was a well-known driver, team manager, and speed shop owner for more than four decades, opening his shop to service the burgeoning sport of dirt track racing. Bret, much like his grandfather, is a veteran of the IndyCar series, USAC midget series, UMRA, and more as both a driver and mechanic, and his fabrication and mechanical skills were directly handed down from his father and grandfather.

“These skills and craftsmanship are direct descendants from a bygone era that you struggle to find anymore.”

Today, some sixty years after its founding, Northbilt has evolved into a full-service motorcycle destination, housed in the same space that used to host Dan Gurney’s Indianapolis operation! This project started with the idea to build a scrambler version of a 1973 Honda CB350 Four, which quickly evolved into concept custom built to answer the question, “What if Honda built a CL350F, a Scrambler version of the CB350 Four?” That question carried through to every aspect of the build, as the team sought to build a modern custom from that fictitious model.

“It was a fun exercise in the fact that we got to imagine if Honda built this, would they have done this? And that carried through all the way to the paint even.” Everything on the bike has been rebuilt, replaced, or customized — all the way down to the hardware, which is 99% stainless steel. Says Bret:

“We built it like a race car so everything had to fit and work perfectly first and foremost and we definitely pulled that off.”

Below, we get the full story on the build, as well as some stunning photos from Joshua DeMore (@_thefastestsicilian). 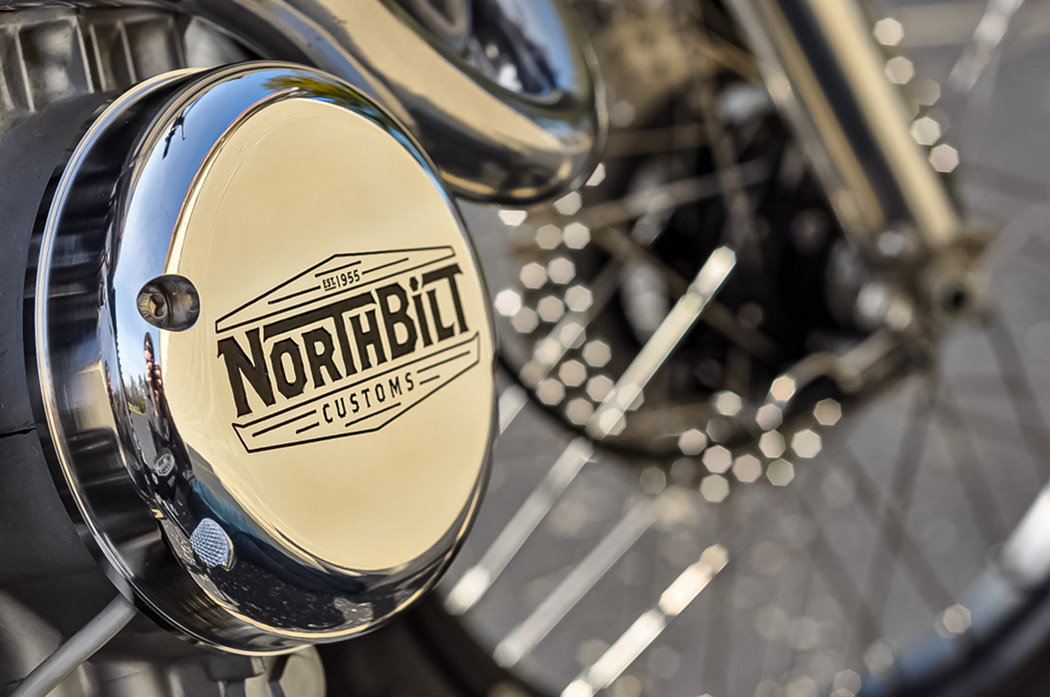 I’m a native of Indianapolis, born into and raised in the racing industry here. My grandfather was a well-known driver, team manager, and shop owner here for 40 years. That’s where I learned all of my fabrication and mechanical skills. I followed in his footsteps and worked in the IndyCar series for almost 10 years with Team Penske and Panther Racing. I also campaigned a TQ midget and a full-size midget for four seasons as a driver.

My history with motorcycles started at 11 years old with a 1980 XR80 that had a stretched timing chain. We didn’t go through the exercise of replacing the chain due to the ease and cost effectiveness of replacing valves. After being taught once on how to replace a bent valve and time the engine I did it on my own a dozen or so times every time it would jump the timing until moving on to the next bike. I have pretty much been working on motorcycles and race cars since then.

Our shop is located on Gasoline Alley here in Indianapolis. We have this great cottage industry here due to the racing going on and Gasoline Alley is one of several concentrations of those shops here. We’re located a couple of miles from the speedway. Just on this road alone there are shops that supply services, parts, chassis, etc. to IndyCar, NHRA, NASCAR, IMSA, USAC, World of Outlaws and on and on. Our particular shop has a great history of housing several high profile teams and legends over the years.

This was a customer project that was brought in with the idea of building the first 350 Four scrambler.

The concept started as a scrambler build and evolved into what we started calling a “concept custom” so we essentially built 2 bikes at once. We had to conceptualize a fictitious model and then build a modern custom from that. The idea of the “concept custom” came from the fact that we borrowed some stock bits from other Honda models to create this one. Things like the CB360 tank and front forks. It was a fun exercise in the fact that we got to imagine “if Honda built this, would they have done this?” and that carried through all the way to the paint even. 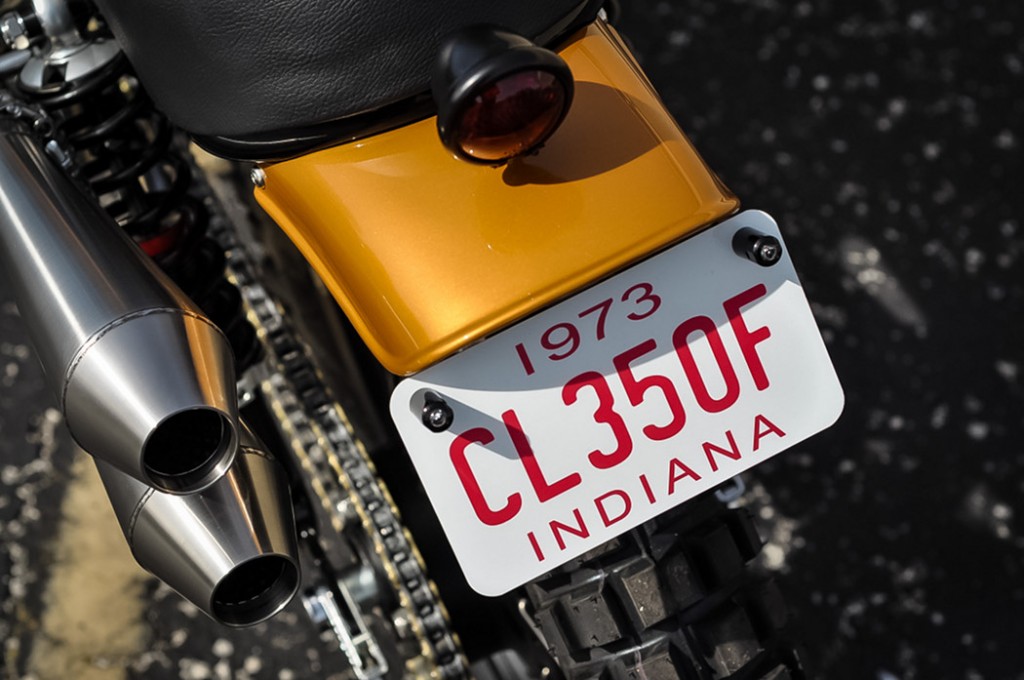 Smooth as glass. It’s essentially a brand new 47 year-old motorcycle. There isn’t a single thing that hasn’t been touched or rebuilt on it. Even down to brand new hardware throughout, which is 99% stainless steel. I’m really happy with the final fit and finish. We built it like a race car so everything had to fit and work perfectly first and foremost and we definitely pulled that off.