The BMW R1150GS was the company’s premier adventure bike from 1999-2004, powered by an 1130cc, 85-hp air/oil-cooled flat twin boxer engine that made a stump-pulling 75 lb-ft of torque at 5250 rpm.  The big GS sported BMW’s Telelever suspension up front, Paralever suspension in the rear, six-speed gearbox, and shaft-drive — in essence, a two-wheeled overland rig that was happy on tarmac or dirt.

“The BMW R1150GS handles brilliantly, will run forever and will cheerfully see over 200 miles from the motorcycle’s tank.” —MCN Ewan McGregor and Charley Boorman famously rode a pair of these bikes during their near 19,000-mile Long Way Round journey from London to NYC, and English long-distance riders Kevin and Julia Sanders circumnavigated the globe in 19.5 days on an R1150GS Adventure — a new Guinness World Record. That said, the big GS was criticized for being overly heavy, expensive, slow, and imperfectly finished.

“The name Hobo Motorcycles came to me after one too many late nights working in my garage and a long look in the mirror, to my horror, a scruffy, hobo looked back at me!” Michael helped his father restore a 1970 Honda CB125 at the tender age of 4 — a bike his father brought home in a bunch of wooden tea chest boxes. Since then, he’s been in love with all things mechanical, specializing in old-school methods of panel-beating and metalwork before starting a company with his late father and finally his own workshop.

The idea for this project came in the middle of the Aprilia project:

“During the ‘il Drago’ build, my brother decided that he was going to sell his pampered 1999 BMW R1150GS, a bike he has owned for the last 5 years and it has been kept in the sort of condition that would put a museum to shame. It was too good an opportunity to pass by and my next build was lined up — Ms.Behave.” Michael was happy to have such a well-treated donor — not because it would make the project easier, but because most donors are in such a bad state they have to be totally redone, losing touch with their past life:

“They have large amounts of corrosion and damage, which results in a total refurbishment and repainting every component. For me, you lose the character of the bike, its story gets totally erased.”

Below, we get the full story on “Ms.Behave” from Michael himself. Following a split from her long term partner, Ms.Behave has used this time during lockdown to go through a period of self improvement. The new look includes a massive weight loss program, chassis and mechanical upgrades and a few treats from Akraprovic, Motogadget and Unit Garage. The ‘new’ Ms.Behave is looking for some care-free fun and to grow old disgracefully. She wants to be taken out on the town, have afternoons in the country or even the odd dirty weekend away. You can take her out, safe in the knowledge that she has the experience and capability to look after you and make sure that you enjoy every moment. Although, she now has a more youthful look, she still retains a classic and refined, dignity that will age very well as the years pass by. Many builds based on older BMW’s use examples that have been neglected, and ‘well used’. They have large amounts of corrosion and damage, which results in a total refurbishment and repainting every component. For me, you lose the character of the bike, its story gets totally erased. This example is not a refurbished old, neglected bike but an amazing, well looked after example with incredible original paint, wheels etc that is both testament to the original build quality and the care and attention the previous owners have shown this amazing bike. This enables a change of character that is more of an evolution, keeping the bikes original paint, powder coating and wheels.

It has many hand-built custom parts. I modified the rear subframe with new mounts for the exhaust and rear aluminium mudguard. The one-off front subframe is a mount for the Shin Yo Halo headlight, Motogadget ‘Ice’ indicators and aluminium mudguard. Old-school panel beating formed the bespoke front fairing and then finished it in matching Mandarin Yellow paint and hand-painted coach lines. The tank lettering and coachlines were also hand painted by a very skilled signwriter. The rear, side mounted number plate with R&G light is a nice addition and finished off with an Italian leather seat by Unit Garage.

The original handlebars, levers and switchgear were cleaned and then painted to keep the cockpit familiar and finished with a Unit Garage instrument housing which is designed to take the original speedo, rev counter and light cluster. The magnesium rocker covers were finished in gloss black, along with the foot controls, skid plate and the Brembo brake callipers to give the bike a lighter and cleaner look. I wanted the rear to look like an old-school scrambler — no lights, no clutter just a mudguard, wheel and big exhaust. I also needed the bike to be road-legal, so a cunning plan was formed to house the Highsider LED stop and tail light under the seat and set the Motogadget Blaze indicators into the rear subframe, running the wiring inside the tubing. The exhaust is the Akraprovic unit fitted to the BMW R Nine T, and with a special link pipe, new mount and a bit of modification, it fits a treat and sounds just right. A low burble at tick-over building to a throaty rasp as the revs build. Very satisfying. 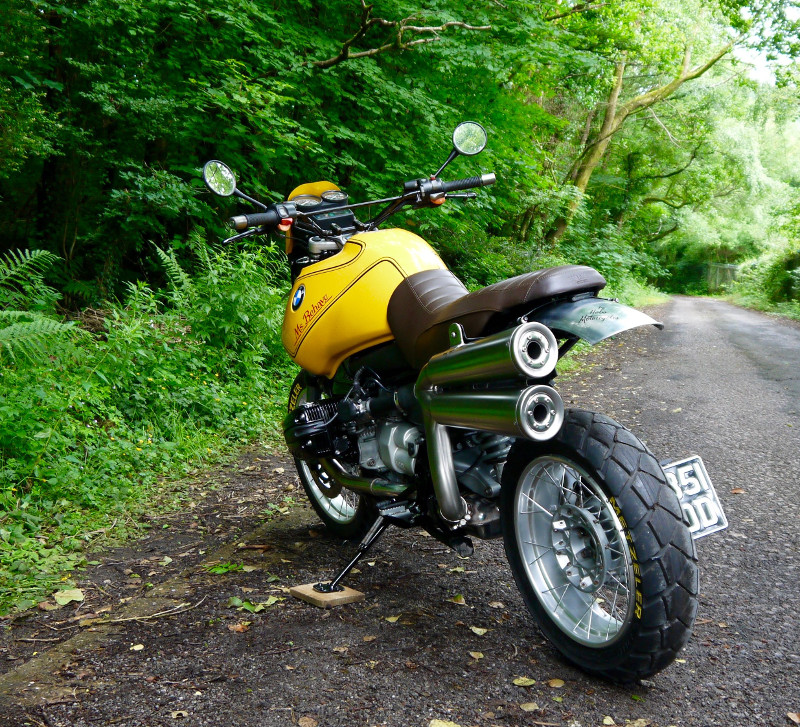 This bike has the retained the legendary BMW GS DNA, enabling smooth, powerful progress over virtually any terrain but it’s now finished in a unique ‘street scrambler’ style that makes you want to swing your leg over and take for a unforgettable ride.