“Words can’t describe the sound this thing makes as it comes onto boost.”

Back in 1974, Kawasaki built a plant in Lincoln, Nebraska, to produce their new KZ400 twin, becoming the first foreign manufacturer to turn out motorcycles on American soil. The bike was targeted less toward two-wheeled enthusiasts than gas-conscious commuters, as evidenced by a 1975 advertisement that placed the KZ400 next to a Volkswagen Beetle with the tagline: That said, the middleweight four-stroke proved itself a great all-rounder, with Motorcycle Sports going so far as to call it “The little sister of the Z1.” In the early 80s, the KZ400 received a 10% displacement increase with the KZ440, and a cruiser-styled “LTD” model appeared. With a dry weight of 344 pounds and 41 horsepower on tap, the 440 was a solid piece of two-wheeled transportation, but certainly no high-performance machine. That’s where Nigel Fox of Slyfox Customs comes in — a 31-year-old boilermaker / welder who’s been riding motorcycle since he was hardly out of the crib. After building a 1980 KZ400 café racer out of his kitted-out 12×9 backyard shed, he decided to up the ante:

“I’ve always wanted a turbo bike for promotion of Slyfox Customs, to ride on the odd Sunday, and add to my bike lineup — I’ve seen it done and never seen a turbo bike like I had in mind.” Pretty much everything on the bike is custom, including the sheet-metal headlight nacelle, the entire fuel tank, the exhaust and oil cooler, and the entire plumbing for the VZ21 turbo setup beneath the seat. Nigel even did the paint in his back shed — a Kawasaki green base with a light gold/green pearl! It was a total of four years of work, but completely worth it:

“Words can’t describe the sound this thing makes as it comes onto boost.”

Below, we get the full details on the build Nigel from himself. I’m 31 years old, trade qualified boiler maker/ welder. Been riding bikes since I was 5 years old — always loved to modify cars when I was younger, and then just moved onto bikes. With my other 1980 KZ440, I turned it into a café racer, and the passion grew from that. My workshop is a 12×9 shed in the backyard, with AC/DC TIG, lathe and mill, MIG welder, and way too many spray painting guns, ha. 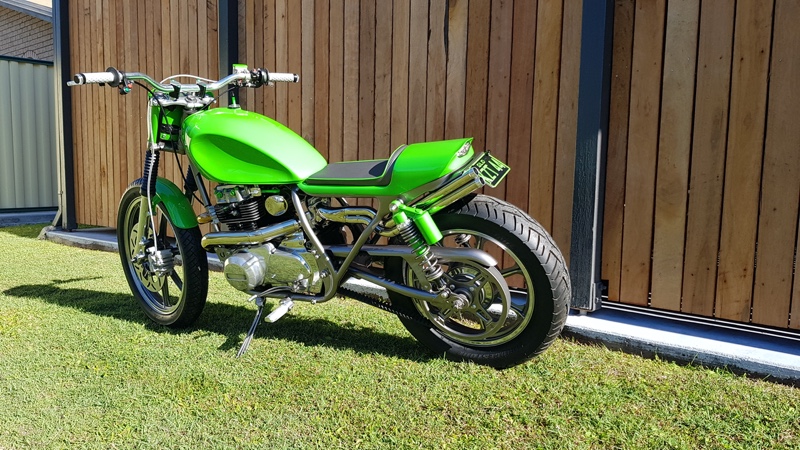 I’ve always wanted a turbo bike for promotion of Slyfox Customs, to ride on the odd Sunday, and add to my bike line up — I’ve seen it done and never seen a turbo bike like I had in mind. • What was the design concept and what influenced the build.

I’ve built a few café racers and modified scooters, but never a street tracker, so I decided to build a street tracker with a dirt bike look — and man that was very hard, ha. With a custom one-off headlight to hold a WRr450 headlight and GPS speedo, boost and fuel air ratio gauge neatly was no easy task, but needed for the tracker look. All the bits and pieces machined to get the turbo mounted in there and the draw-through carb setup to work. All the paint and panel was done myself, and full rewire and tuning all done myself in my back shed. Just love to tinker, ha!

Words can’t describe the sound this thing makes as it comes onto boost. 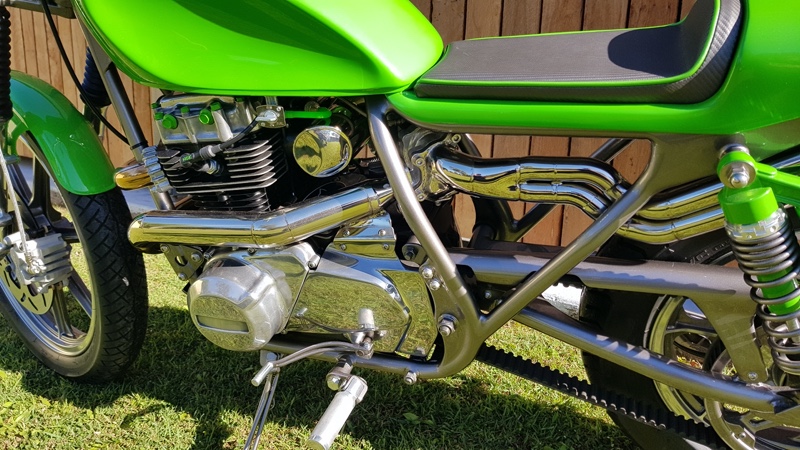 The placement of the turbo, the exhaust and the shotgun pipes, and the headlight setup would be where I think most of my time went.