Back in 1993, BMW launched the F650 Funduro, a lighter single-cylinder sibling to the mighty R1150GS. The Funduro was BMW’s first single-cylinder motorcycle since the 1960s, jointly designed with Aprilia and powered by a 652cc, 48-hp Austrian Rotax engine. The bike soon earned a reputation as a superb all-rounder, capable of both on- and off-tarmac excursions, though many testers felt it lacked the charisma and panache of its Bavarian brethren:

“The BMW F650 is a work horse and power house in one, neat package. With loads of torque, there’s power right through the rev range, taking you from town, to country to motorways with relative ease. The BMW F650’s smooth delivery makes for easy riding and it’s tried and tested, providing effortless welly. A very reliable if perhaps a little uninspiring motorcycle…” —MCN Fortunately, there are builders like our friend Yann Le Douche of France’s Breizh Coast Kustoms (aka BCKustoms), who make it their mission to resurrect such aging, forgotten workhorses into traffic-stopping thoroughbreds. Last year, we featured Yann’s 1994 BMW F650 GS Funduro “Dezert Runner” — a rally raider he built during France’s first Covid lockdown. We always love to hear that a BikeBound feature generated new business for a builder or workshop. Yann says his initial Funduro project was just for fun, with no commercial intentions, but the “Dezert Runner” had other plans:

“Then came the very good exposure given by BikeBound, which helped the bike photos and description to travel. It reached all the way to the Indian Ocean. There, a young guy named Adrien asked me if shipping such a project to him would be possible.” Soon, Yann was sourcing another F650 GS donor, embarking on a darker, sleeker, more streamlined version of the original build:

“Adrien asked me to provide him a Dezert Runner-looking bike but with dark colors and fewer options — no need for the GPS display. He wanted to keep the top case for storage but also as a backrest for his wife or kid, and light bike protection for off-road rides around the island and the volcano.” The result is the aptly named “Island Runner” you see here — a matte black Bavarian beauty that’s the perfect companion for roads and trails around the owner’s home island of La Réunion in the Indian Ocean.  Below, we talk to Yann for the full details on the build, and we have FFH Photographie for the gorgeous woodland shots. Well, well, well… Don’t know what hasn’t been mentioned yet…

“I’m a custom motorcycle builder since 2010 with my little BCKustoms workshop officially created in Brittany, French west coast, from 2019. I’ve been trying to get rid of that, but, looking at a stock motorcycle, I can only think about what it should look like… But I don’t want to get treatment or therapy for that!”

Been drawing vehicles since I knew how to use a pen a long, long time ago. Would have loved to do the Beaux Arts or a design school for my studies but been denied of that as I was told then that “art is not a reliable way to get money”… Actually, I’m not making a lot more money than an artist with motorcycles, but I’m doing the job I dream of and that makes me smile entering the garage every morning, weekends included. I was pretty proud to release my own ’94 Funduro last year, done during the first Covid lock-down, #coronavirusbikebuildoff as would have tagged RSD. This initial ADV project had no commercial intention when it was prepared. Just a bit of fun refacing a Bavarian young timer with a more rugged appearance. Then came the very good exposure given by BikeBound, which helped the bike photos and description to travel. It reached all the way to the Indian Ocean. There, a young guy named Adrien asked me if such a project shipped to him would be possible. We then checked the used Funduro for sale and found one not too far from the workshop I could go and scoop up. Adrien asked me to provide him a Dezert Runner-looking bike but with dark colors and fewer options — no need for the GPS display. He wanted to keep the top case for storage but also as a backrest for his wife or kid, and light bike protection for off-road rides around the island and the volcano. To complete the full matte black color, he chose some glossy blue/white/light grey stripes.

As on the Dezert Runner, the front screen was homemade with a heat gun. As there was no requirement for GPS display or mirror screen, the front screen could be different. But, between protection and fresh air needed out there, the adjustable solution was the best I could provide.

Except a starter piston properly welded to the carbs, which actually had to be replaced, there were no particular issues. I’ve also noticed that the original stainless BMW exhaust manifold has some heat issue on the plastic airbox. I’d noticed this already on mine, but on this one, we had a big hole on the lower part of that plastic box. The replacement one which we found received thermal protection to prevent this problem from happening again. 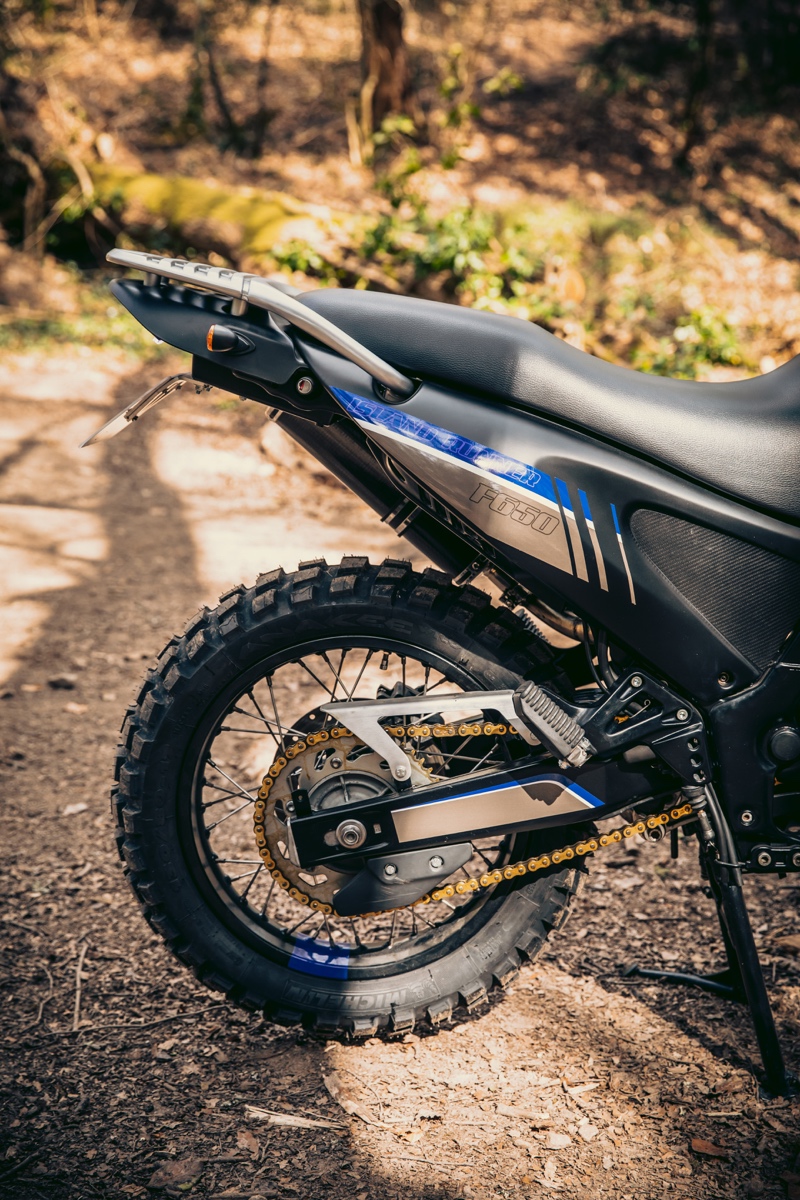 This one was quite easy to come up with. As the bike was leaving for La Reunion, the Island Runner was the logical nickname after the Dezert Runner. Despite the fact that this was the second Funduro built, I’ve been trying to improve the concept. The crash bars have been upgraded with a supplementary pod on each side — to be more efficient in case it’s needed. A new copy of the home-designed bash plate, the license plate bracket, the chain guard, and the front luggage rack above the tank were back on that new bike. Including that little adjuster for the screen height — those were some points I considered on that project.