In 2017, the world received a completely redesigned version of the beloved Honda Rebel, one of the most popular entry-level machines of all time. The new CMX500 Rebel was a more stylish, more powerful cruiser than its predecessor, and the engine was particularly popular:

“The 471cc parallel-twin engine in the Honda Rebel 500 is a cracker. And why wouldn’t it be? Afterall, it is taken from Honda’s CBR500R, which currently rules the roost as top dog in the A2-friendly sportsbike class.” —MCN In 2020, the Rebel 500 received a number of upgrades, including a slipper clutch, stiffer forks, nitrogen-filled rear shocks, redesigned LCD lighting, and more. Our friends at Motorcycle.com were especially pleased with the updated version:

“There’s nothing not to like here. The Rebel 500 is the modern Honda you meet the nicest people on, with all the same attributes that launched Honda’s amazing success 60 years ago. Though it has the look Americans crave, it’s completely approachable, affordable, easy to keep, life-expanding – and will no doubt run forever with a minimum of care.” —Motorcycle.com The Honda folks were so pleased with the build, they approached the MAAN team for yet another build — this one would compete for Honda Europe’s Best Custom Rebel at this year’s Wheels and Waves festival in Biarritz, France.

“After the success of the Super Cub X, Honda entrusted us with this project, giving us total freedom over the realisation. We sent no renderings or sketches and until delivery the project was secret. Although we had maximum freedom of expression, we decided to impose constraints on ourselves: leave the frame intact and do not replace the tank.” Given the Wheels and Waves vibe, the MAAN team decided to build the bike in the style of the sand / beach racers of the 1930s and 40s. They are most proud of the change they made to the lateral lines of the bike, flattening out the upward slope of the factory machine with custom-built Öhlins shocks and a springer fork. The bike is running 19-inch tracker wheels, a custom stainless steel exhaust that runs close enough to the frame that it doesn’t burn the rider, and some very cool hammered metal bodywork. Nicola says the bike is a lot of fun, especially on the beach:

“The bike has a nice engine, with almost 50 hp, which is more than enough to trigger a drift and come out of the corner sideways, with a lot of torque and a good stretch to the next corner.”

Below, get the full details on the build! Custom project for Honda Italy, presented at Wheels and Waves for the title of Best Custom Honda Europe. After the success of the Super Cub X, Honda entrusted us with this project, giving us total freedom over the realisation. We sent no renderings or sketches and until delivery the project was secret. Although we had maximum freedom of expression, we decided to impose constraints on ourselves: leave the frame intact and do not replace the tank. Building a motorbike for a manufacturer is different than doing it for a private customer, so we interpreted the project as potentially reproducible and recognisable. We were therefore inspired by the Sand Racers of the 30s and 40s, with a more modern touch for the paintwork that instead looks to the 70s. Initially we didn’t agree on the way to go, but in the end, working on the geometry to get as flat a line as possible was the right way to go, which, considering the short time we had to build the bike, we would do again 100 times.

The original Rebel has an upward lateral line, with a tank that accentuates that curve even more so and a very low and hollow seat.

We first replaced the rear suspension with two Ohlins shocks designed for us by Power Moto di Fabrizio Corda, the technician who has always looked after the suspension on our bikes. We then moved the fork out by 16 cm, which would not have made the bike usable because the wheel would have hit the radiator, but once it was down we were convinced that the line was what we were looking for. Our friends at Suicide Snail provided us with plates and the structure to then assemble and weld a springer, allowing us to bring the front wheel forward so that it would no longer touch the radiator. We used a generous 10 cm linkage with two very short stems. We then fitted two 19″ wheels like the old sand racers. Next we made a tail that followed the new line of the tank, constructing a metal template on which our friend Umbo then hammered a sheet with the recesses for the number holder. The last touch was the stainless steel exhaust system that we welded as close as possible to the frame, so the rider’s leg wouldn’t get burnt: the very wide crankcases of the bike are in fact the first obstacle that touches the leg, allowing long rides without any problem. The silencer, finally, was supplied to us by SC Project. • Can you tell us about the nickname?

Like all our creations, this one also contains the word MAAN in the nickname, which is the name of our workshop. With Wheels and Waves and surfing in mind, we thought there was the long board, the short board, the body board…and the MAAN Board! Riding the bike is very special because it is designed for sand racing, which is why it does not have a front brake. As with the Supercub X, we created a switch that allows you to eliminate the ABS, and we already made a provision to install the front disc and its original brake, but for aesthetic reasons we preferred to leave it without. The bike has a nice engine, with almost 50 hp, which is more than enough to trigger a drift and come out of the corner sideways, with a lot of torque and a good stretch to the next corner. The thing we were most proud of was that we were able to achieve a completely different line to the original bike while not modifying the chassis, not covering it (on the contrary, leaving it in evidence), or using superstructures — but only working with the geometry. Baja Monkey: Honda “MAANkey” Scrambler - Motocicli Audaci builds a Monkey Scrambler…and races it!  The Honda Monkey is one of the most beloved two-wheelers of all time. Legend has it that the original 1960s models were based on a children’s ride […] 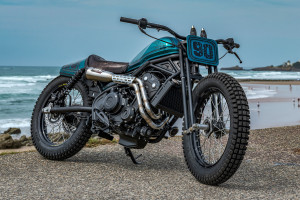 Sand Racer: Honda Rebel 500 “MAANboard” - Motocicli Audaci (MAAN) builds a Rebel 500 Beach Racer…  In 2017, the world received a completely redesigned version of the beloved Honda Rebel, one of the most popular entry-level machines of all time. The new […] 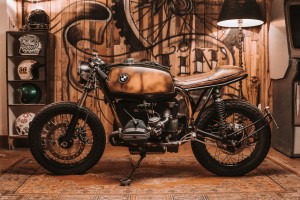 Rust-a-Maan: BMW R45 Cafe Racer - The BMW R45 was the smallest of the BMW airheads, sporting a 473cc / 35-hp version of the iconic boxer engine good for a top speed of 95 mph. Although it looked like a scaled-down […]