The Honda CX500 — along with variants like the GL500 and GL650 — incorporated a variety of innovative features for the late 70s / early 80s. These included liquid-cooling, shaft drive, electric-only start, and an 80-degree V-twin mounted with the crankshaft parallel to the longitudinal axis of the bike — much like a Moto Guzzi.

The bikes developed a reputation for ruggedness, surviving harsh lives as courier mounts in the UK, but no one reckoned the slightly odd “Plastic Maggot” would become a darling of the new wave custom scene — one of the most popular cafe racer donors of the 2000s! 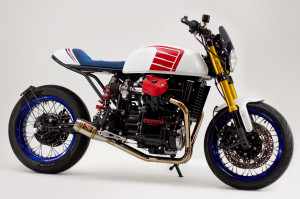 Jackson Motorcycles: “CX500R” - Back in 2019, we showcased a very special build from Craig Jackson, a Texas-born engineer and former motocross racer who competed in the Grand National Championship three times at the Houston Astrodome. About a decade […] Honda CX500 Cafe Racer by Rolling Retro - Nothing we love more than a shed-built cafe racer — especially when it turns out as clean as this one.  The Honda CX500 has become a favorite among builders, with its ‘Guzzi-style V-twin, stubby wheelbase, […] 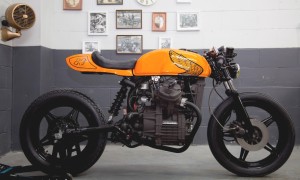 Honda CX500 Cafe Racer by BBCR Engineering - Few bikes have started life as unloved as the Honda CX500. Designed by Shiochiro Irimajari, the man behind the incredible six cylinder CBX1000, Honda billed it as ‘First to the Future.’ Though hoping it would […] Honda CX500 Brat Cafe by Therapy Moto - Here we have one of the prettiest Honda CX500 customs ever, built by Lars Engelviken of Norway’s Therapy Moto.  The “Poor Man’s Guzzi” is a tough bike to turn pretty, but Lars managed just that. […] Honda CX500 Cafe Racer by Ironwood Motorcycles - Ironwood Custom Motorcycles of Amsterdam is quickly becoming one of our favorite custom builders. Earlier this month, we featured their incredible Yamaha XS650 scrambler. Today we have another work of two-wheeled art, a 1978 Honda […] Faves: 1982 Honda CX500 Custom - The Honda CX500 has officially become a popular platform for custom builds. With a few modifications, such as straightening the lines and adjusting the fuel tank by a few degrees, it goes from a motorcycle […]