Royal Enfield remains one of the most renowned names in all of motorcycling history — the only surviving brand that’s spanned three different centuries — the 19th, 20th, and 21st. The company began in the late 1800s making precision firearms parts, complete quadricycles, and various cycle arts for other manufacturers.

In 1901, the company built their first motorcycle, equipped with a 239cc engine. By 1910, they were using Swiss Motosacoche V-twin engines and experimenting with chain drives and 2-speed gears. They competed in the 1911 Isle of Man lightweight TT and the 1912 Isle of Man TT with their Model 180 sidecar, powered by a 770 cc V-twin JAP engine. In 1913, they introduced their first in-house V-twin engine.

During WWI, Enfield built motorcycles for the British War Department, utilizing their own single and V-twin engines, and endured the Great Depression with financial reserves from the postwar years. In 1931, they introduced the first motorcycle to carry the Bullet name, which featured a single-cylinder inclined engine with exposed valve gears, four valves per cylinder, spring-girder forks, and rigid rear frame with sprung saddle — available in 350cc and 500cc models.

The 350cc Bullets would be used by the British Army and Royal Air Force during WWII, many of them manufactured in an underground factory built in an old stone quarry in Wiltshire. Notably, Enfield also produced the 125cc two-stroke WD/RE “Flying Flea,” designed to be parachuted to dropped by parachute alongside airborne troops.

The Bullet would go on to have the longest production run of any model in motorcycle history — a truly iconic machine, and one of the world’s most popular motorcycles for cafe racer and custom conversions.

In the late 1940s and early 1950s, Royal Enfield Bullets would win the International Six Days Trail (ISDT) — the “Olympics of Motorcycling” — and the British and Indian production lines would diverge in 1955, as new retooling and designs were not to be incorporated into the Indian Army models.

“The UCE replaced the 70-year-old Royal Enfield cast-iron engine, which had the distinction of being in production longer than any other motorcycle engine in history…” —Ultimately Motorcycling

And in 2020, the company announced the production of the 500cc Bullet UCE engine would cease, continuing only in the 350cc displacement.

Below are some of the Royal Enfield cafe racers we’ve featured here on BikeBound.com. 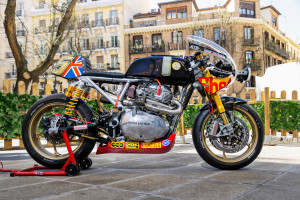 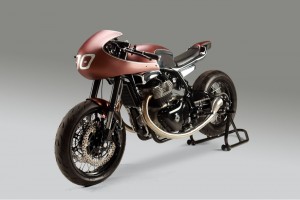 The 30: Royal Enfield Continental GT 650 Cafe Racer - Jakarta’s Kromworks transforms the latest Royal Enfield twin… Royal Enfield built their first motorcycle back in 1901, making them one of the oldest motorcycle manufacturers in the world. Unfortunately, the company was unable to keep […] RECK 2: Royal Enfield Cafe Racer Kit - The Royal Enfield Continental GT 650 is inspired by the original British cafe racer culture of the 1950s and 60s, a modern interpretation of the classic GT 250 of the era. The bike’s heart is […] Vajra 612: Royal Enfield Custom Cafe Racer - A Faster Bullet… The Royal Enfield Classic 500 — aka CL500 — has been in production for a decade. From the outside, it looks like an old-school Enfield, directly linked to the company’s storied heritage […] “Reina Del Camino” Continental GT 535 Cafe Racer - A “Queen of the Road,” built by Iron Macchina Customs… The Royal Enfield Continental GT draws on the heritage of the original British-built 250cc version of the 1960s, a 21-hp “factory cafe racer” that came […] Royal Enfield GT Cafe Racer by J&D Custom Co. - “Made like a gun, goes like a bullet…” India has one of the strongest motorcycle cultures in the world. In fact, a recent report from Pew Research indicates that 47% of Indian households own a […]