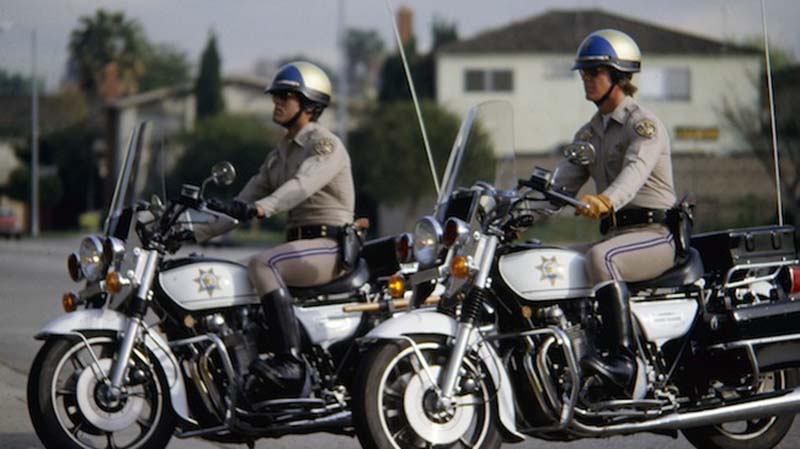 Motorcycles in CHiPs:  The Original Show

Many of us can remember sitting in front of the family television, waiting for CHiPs to come on. The show was wildly popular during its run, so it is no wonder that CHiPs trivia is a major part of the internet buzz to this day. One of the most common questions is ”what kind of motorcycles were used in CHiPs?” All of the motorcycle cops in the television series rode Kawasaki KZPs just like the real California Highway Patrol officers of the era. That is no surprise, given the lengths that the show’s producers went to keep the characters inline with the real ”chippys” they were portraying.

What is a Kawasaki KZP?

The Kawasaki KZP is a modified Kawasaki KZ900 or KZ1000 depending on the year it was put into service. The modifications, mainly practical in nature, include: windshields, saddlebags, pursuit lights, folding floorboards, radio communications equipment, electronic sirens, and high performance tires. Bike specs for a KZP include:

Motorcycles in the Movie CHiPs (2017)

In 2017, a buddy cop remake of the original series came out, written and directed by Dax Shepard. While reviews of the overall film have been lackluster, from a lowly 17% Rotten Tomatoes rating to Motorcyclist‘s decidedly un-rave review, the movie does bring some of the best motorcycle filming and stunt riding to the silver screen since Bud Ekins’s the over-the-fence jump in The Great Escape. Dax Shepard is not only a rider, but he apparently does track days on his Suzuki GSX-R1000 and Ducati Hypermotard 1100S at Buttonwillow Raceway in California. 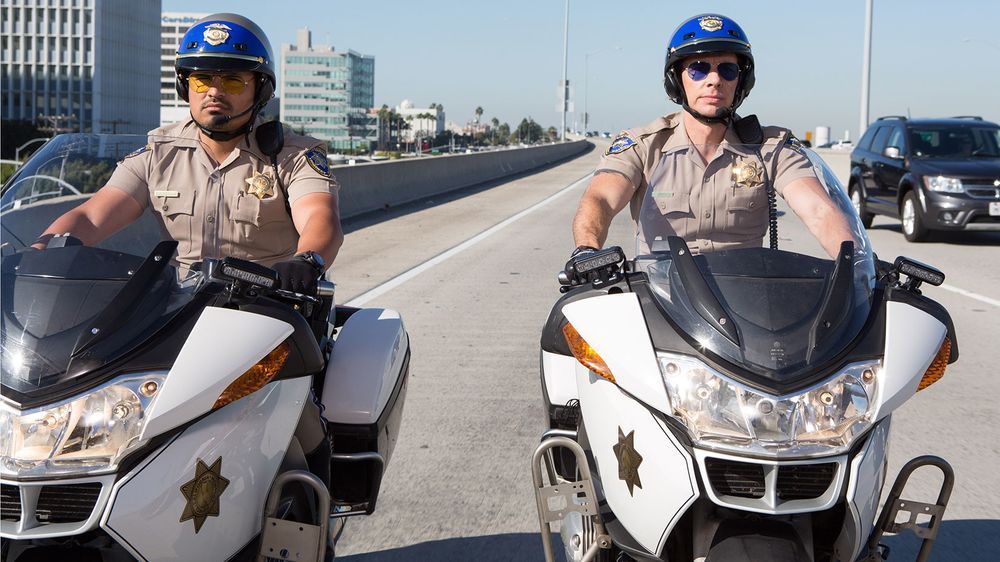 The bikes in the remake are the those currently favored by the California Highway Patrol, the BMW R1200RT-P.  Introduced in 2005 by BMW Authority Vehicles, the bike is a police version of the R1200RT, with the addition of a variety of equipment, including stainless steel crash bars, saddleboxes, a radio box in place of the pillion seat, auxiliary battery, 100-watt siren speaker, LED lighting pods, and more. The “RT-P” has a 1170cc, 109-hp flat twin, and there are all kinds of options for gun racks, radar/lidar equipment, and more. The other main motorcycles in CHiPs are Ducati Hypermotards.  Dax Shepard is huge fan of the machine, owning one himself. They are mentioned in the movie as being “all-terrain motorcycles,” which is a bit of a stretch, but the Hypermotard is no slouch.  The Desmo 90-degree air-cooled V-twin that offers 113-hp in a bike that weighs less than 400-lb. This accurately named bike — it truly is a “hyper” supermoto — won Best of Show at the EICMA show at its introduction, and the film shows some fun riding on these bikes.  We won’t spoil that part 🙂 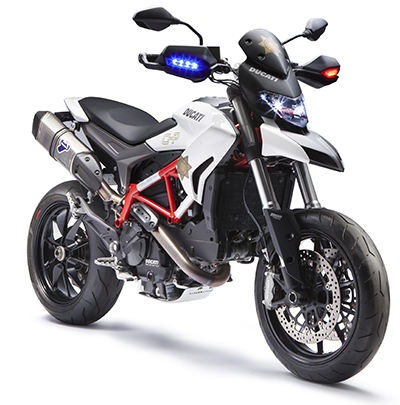 Below is a video of Scott Carty test-riding one of the actual bikes from the film. This particular bike ended up being auctioned for charity post-production.

Toward the end of the film, Vincent D’Onofrio’s character chases down the CHP stars on a large black H-D cruiser that spits blue flames from the tailpipes. There has been some confusion around this bike, as it sounds like Officer Baker says:  it’s a f**cking Warlock, man!  At first, we thought he might be referring to the Feuling W3 Warlock, which turns a Twin Cam 88 into a 150 cubic inch, 150-horsepower, three cylinder motor — complete with modifications to the Dyna frame. However, the Warlock motorcycle in the film does not seem to have a third cylinder.

To get to the bottom of this, we tracked down the movie script.  Here’s the exact wording:

So, it seems that Baker is referring not to the bike, but the bad guy himself.  Instead, the “Warlock motorcycle” seems to simply be a modified Harley-Davidson Electra Glide, as such as those used by many police departments. Apparently, Harley themselves tricked out the bike, according to Dax’s desire for “Sylvester Stallone’s Mercury from Cobra…in motorcycle form. Dax discussed this in an interview with Jalopnik:

Jalopnik: “Were those bikes all pretty heavily modified?”

Dax: “No! Nothing was modified. We had a skid plate on the Hypermotards because we kept driving ‘em up and down staircases and we’d rip oil filters off of ‘em? But, no, nothing was tricked out. Oh! [Vincent] D’Onofrio’s Harley was tricked out, by Harley, but that was just an aesthetic thing. And I wanted it to shoot flames which I thought was cool.”

Jalopnik: “That was pretty sweet.”

Dax: “Yeah, serves no purposes but it looked real cool. My blueprint for his was, I told Harley: ‘I want Sylvester Stallone’s Mercury from Cobra, basically, in motorcycle form.’ But those Hypermotards do all that stuff, which is just crazy. I mean they jumped over that wall into the compound, over and over again, no broken shocks no nothing.”

So, it seems that the upgrades to the “Warlock Harley” were “just an aesthetic thing.”

The Most Popular Police Bikes Today

While BMW says their bikes are used in 430 law enforcement agencies in the United States, and 150 countries worldwide, Kawasaki remains a strong player when it comes to police bikes. The most common Kawasaki police motorcycle at this time is the Kawasaki Concours 14P, also known as the Kawasaki 1400GTR. The base 1400 GTR is powered by a 1352 cc inline four that offers 153 hp and 100 lb-ft of torque at 6,200 rpms, and can have a top speed in excess of 170 mph depending on the modifications ordered by a police department. The police units are not directly manufactured by Kawasaki, but are modified bikes ordered through dedicated builders. If you are looking for CHiPs trivia beyond what motorcycles were used in the series, you can visit IMDb CHiPs trivia page.